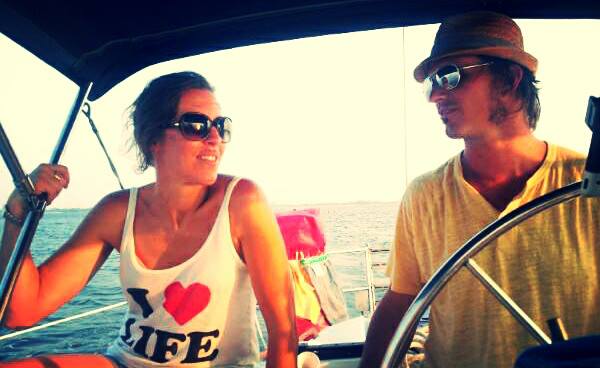 Stell & Snuggs is the new acoustic, highly versatile duo group led by the husband-and-wife team of Jarad Astin (accordion, stomp-box, vocals) and Christel Rice-Astin (flute, ukulele, vocals). They began their journey together in the spring of 2013 when they moved onto a sailboat and hit the seas as Stell & Snuggs. Since then, they have sailed over 6,000 nautical miles onboard their sailboat, Catherine, sailing to the Caribbean and back to NYC, holding over 100 performances in 2013-2014. They are now geared up and ready to hit it again.

“Moving through the sea under the power of the wind opens a whole world, really affording the ability of long-distance travel to those with more will than purse.” Jarad Astin aka “Snuggs”

Stell & Snuggs presently balances between instrumental Brazilian street music (choro) , Colombian Cumbia, Cajun, retro-pop, and their own oringial music, putting a new spin on all these genres through use of a dynamic instrumentation using accordion, flute, and ukulele, and DIY foot-percussion. As their home S/V Catherine takes them and their gear to exotic places to perform, they draw from a wide range of influences in such as Afro-Caribbean, salsa, jazz, American retro-pop and naturally gypsy music. Their music and lifestyle embody a modern type of gypsy – choosing to travel with their music rather than settle down, all the while using one of the worlds oldest and greenest modes of travel – sail.

Although the lifestyle of sailing to performances on tropical islands sounds quite romantic to say the least, it didn’t begin as such.  What brought Stell & Snuggs to the water permanently was also the very thing that took most of all their possessions away from them.  Having lived on a ground floor apartment on Rockaway Beach, NY during Hurricane Sandy, they lost their place of residence and were displaced for 9 months – but it was this very reality which made their “dream come true” to tour and perform using the wind to get them there. They searched tirelessly for that perfect sailing vessel over those cold winter months of 2013, and found the perfect boat in Mystic, Connecticut.  They moved aboard Catherine in June of 2013, and set sail from Brooklyn, NY for the Caribbean in October of that same year.

Stell & Snuggs debut, titled “Vela,” is to be released this winter 2014. It promises playfully crafted yet driven melodies along with a type of groove unique to a duo setting.

Given their diverse musical backgrounds, (Jarad, a jazz organist/pianist and Christel, classically trained and Irish traditional flutist) they naturally gravitated towards producing a passionate and acoustic music infused in different cultures.  Embracing that diversity in their songwriting, they found both inspiration and means to do so by way of sailing.  This opportunity and drive to be on the open water gives them that freedom to taste the variety of music they hear on land and infuse it to their own blend.

Check them out at www.StellandSnuggs.com and lend them a hand with their new album at https://www.kickstarter.com/projects/86629820/stell-and-snuggs-debut-recording.