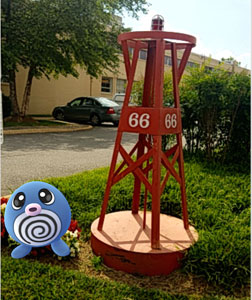 The reality-game-meets-exercise app currently taking the nation by storm, “Pokémon Go,” now has 21 million users every day – reportedly the most successful mobile game ever in the U.S.. The game features characters called Pokémon that players capture in the real world using a combination of GPS and augmented reality. That also means that Pokémon-mania has also come to the water and with it, BoatUS, the national boating advocacy, services and safety group has three tips for playing Pokémon Go while boating:

1. Be aware: The US Coast Guard reports “Operator Inattention” as one of the five main primary contributing factors in accidents. When searching for a “water type” Pokémon such as “Magikarp” on a waterway, let the first mate or friend handle the cell phone while the captain keeps a safe lookout.
2. Watch cell phone battery use: Users report the game eats up a smartphone’s battery charge. With many recreational boaters today relying on their cell phones for communication, it would be wise to bring along a spare charger, or use battery saving mode. BoatUS also reminds boaters that only a VHF radio can summon emergency help from the closest rescuers, ensuring the fastest response.
3. Have fun: The BoatUS National Headquarters in Alexandria, Virginia offers a Pokémon “gym” located next to the iconic BoatUS Buoy at 880 S. Pickett Street. At lunch, some BoatUS employees can be seen playing the game. (Insider’s tip: The yellow Pokémon Go BoatUS Marine Insurance underwriting team often battles other BoatUS departments, and for a limited time, free boat insurance quotes will be available to all players.)