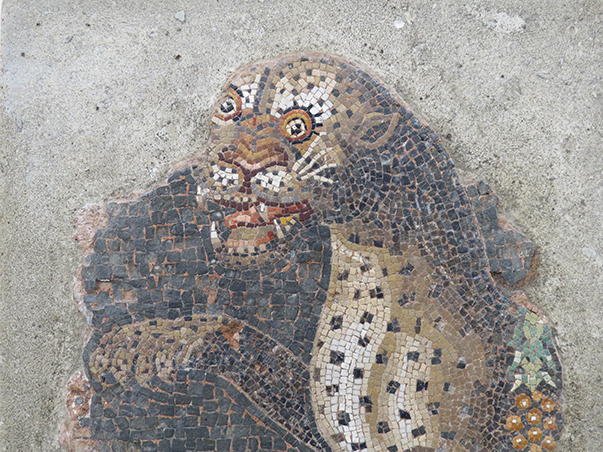 Color Outside the Lines

A charter in the Greek Cyclades Islands puts rainbows to shame.  Previously published in BWS by Zuzana Prochazka.

I had always thought that if Greece were a color, it would be white: all that ancient white marble architecture of the Acropolis and the dry yellow-white rocky hills of its thousands of islands. But after a two-week charter in the Cyclades Islands, I now know that Greece and all its color, puts rainbows to shame. 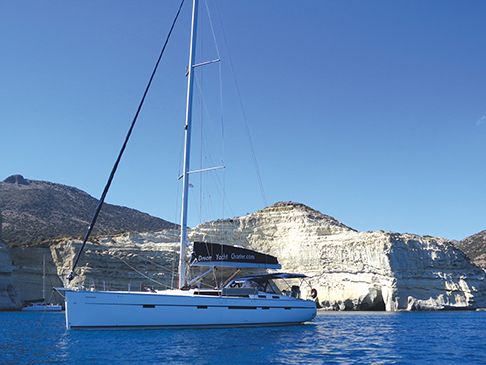 We chartered a new Bavaria 56 from Dream Yacht Charter on the June shoulder season and tackled the Cyclades because we figured with a two-week itinerary, we had plenty of time to see most of them. The chart gave us a reality check. Over 30 main islands (and hundreds more beyond that) stretched over 1,000 miles of the azure waters of the southern Aegean Sea. What to do? We set an (overly)-ambitious itinerary and cast off from Lavrion, 35 miles south of Dream’s actual base near Athens. The manager had the boat ready for us at the bottom of the Attic peninsula and the 45-minute cab ride would save us a day at the start that would come in handy at the end.

The Cyclades are for sailors. The vast sprawl of the islands means you cover a lot of territory and it’s the place to go for longish days under sail. The climate and weather are approximately that of Southern California and for that matter, so is the deep blue color of the water.

Early on, we experienced a Meltemi, a wicked northerly wind that kept us tied up in Mykonos for a few days. Although the wind never got much higher than 35 knots, we stayed tucked into the marina and used the time to see both Mykonos and its neighboring island of Delos, once the religious and commercial heart of the Cyclades.

Best of both worlds 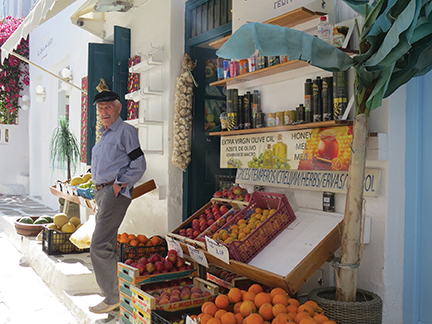 The two islands couldn’t be more different. Mykonos is a Mediterranean destination where superyachts are a common sight. Beautiful people wear beautiful clothes and dance in beautiful nightclubs that are packed into the narrow streets of the main Chora (old town). The parties go on until dawn. Sitting at a café with the renowned Mykonos windmills in the background is not to be missed and neither are the free-flowing carafes of wine that accompany every meal. Sure, you can have the latest in Continental cuisine but I put away more than my fair share of traditional Greek salad with sweet Cycladic tomatoes and big chunks of salty feta slathered in olive oil.

Delos is the antithesis of Mykonos. You can only visit as part of a tour that starts with a ferry ride, so we booked tickets. The main part of the island is an active archeological dig and there is really no other part. There are no cafes, no shops, and no marinas, which is refreshing after the mayhem of Mykonos.

Delos is the birthplace of twin gods Artemis and Apollo, and it was a hopping center back in 1500-1200 BC, during its heyday. The tour winds through merchants’ houses, temples and a large amphitheater. Being of hearty stock, we eventually left the tour and climbed the hill to get an aerial view of the place, trying to imagine how it looked when all the buildings were richly painted as was the Greek custom. Some structures are remarkably well preserved while others look like piles of building material waiting to be used anew. Much of the once-colorful mosaics are left exposed to the elements, which must give museum curators around the world nightmares. Walking through the site is definitely stepping back a few millennia and it left me dusting off my memories of high school mythology classes about Greek gods and monsters. 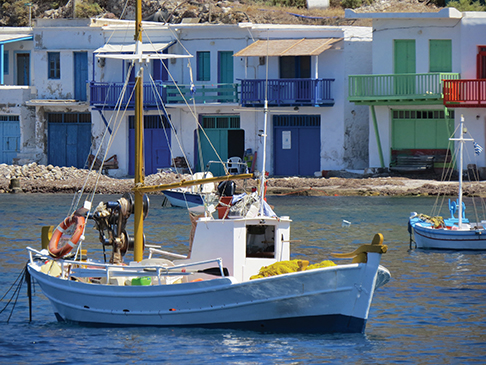 Having recovered our anchor from an underwater spider’s web of lines and chain in Mykonos Marina (not unusual in the close confines of Mediterranean stern-to mooring), we rode the last of the Meltemi south to Milos. This island, known as the place where a farmer unearthed the statue of the Venus de Milo(s) back when she must have had arms, is seemingly entirely made up of caves and cliffs that hover over blue lagoons, punctured here and there by rocks, which spring out from the depths.

After some recon on the town quay in Adamas, we formed a plan on how to execute an island circumnavigation. Each handsome sunburned vendor outlined for us the must-sees while promising a better tour than his neighbor. The next morning we followed the tourist boats on their trek west and south to visit the highlights. It was a stroke of genius as we always arrived a bit after the local boats, which were packed, sometimes 20 on a 45-foot sailboat, with squealing tourists. Dinghying alone into Sykia, a cave whose round roof collapsed centuries ago, was a treat, especially with nobody but our own echo for company.

We continued south to Kleftiko, a Disneyland set of arches, rock formations and caves you can swim into or traverse entirely by exiting another end. Because you can only visit Kleftiko by boat, when all the tourist vessels left, we let out some more chain and made ourselves comfortable for a quiet night at anchor, with no one near and nothing but the stars above.

The wind was in the process of shifting which left the next day with little breeze, perfect for exploring Sarakiniko Beach on the northern side. Sheer white cliffs fall into blue-green water, dotted by pink caves that lure you in for a swim or a kayak paddle. We had a unique vantage point as we were the only boat anchored off the shore, much-envied and often-photographed by the visitors deposited on the beach by tourist buses from Adamas. That afternoon, we circled back to town, finding one more space on the quay for another Med moor, this one executed in windless bliss. 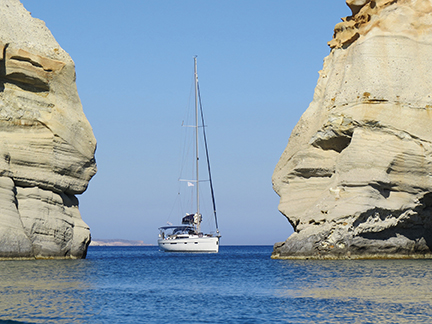 We rented a car on just about every island. It was the cheapest and easiest way to explore beyond the harbors. Depending on the island, we meandered through streets barely wider than the car, dead-ended in fields where stubborn livestock refused to move, and took shot after shot of sleepy fishing villages, cafes buried in flowers and the quintessential Greek doors that came in so many colors, they could fill a coffee table book. Greek doors are almost a matter of competition among the locals and anyone with a door not at street level, decorates their staircase with flower pots and lights so they’re exceptional, both day and night.

Although many of our destinations had the requisite tourist restaurants, Greece is not the typical Caribbean “beach and bar” culture. Villagers go about their daily business, fishing off their brightly painted skiffs, baking bread in centuries old ovens, selling fruits and vegetables and generally living as if the 1950s never left. Spending time among real locals was refreshing and relaxing and it reset my internal clock, which is not easily done, even on a good day.

We fell terribly short of our goal of visiting all the Cyclades. In the end we managed, Kea, Kythnos, Paros, Syros, Mykonos, Delos and Milos. Not only is there simply too much to see and do, but also, in the Cyclades, you must heed the weather. The gods were definitely with us because not only did the meltemi deliver us south and then quit while we explored Milos, but then the wind shifted to the southwest and gave us a nice ride back north as our two weeks drew to a close. 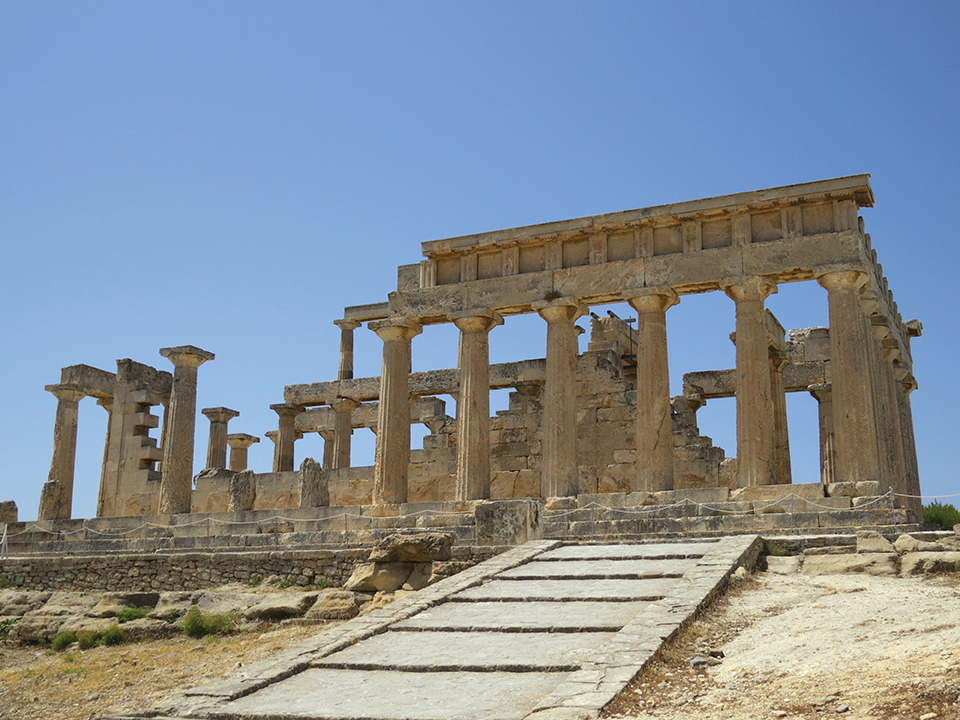 Finding ourselves with an extra day at the end, we exited the Cyclades and set course northeast for Aegina in the Saronic Gulf. Only a few hours from Alimos Marina outside Athens, the Saronics have a completely different character from the Cyclades. Their vibe is much busier but these are still Greece’s children, with bursts of color everywhere from the fish market in Aegina Town to the church and monastery of Agios Nektarios in the interior. Like at many Orthodox churches in Greece, proper attire is required in Nektarios, which can be a challenge for tourists clad in shorts to beat the heat. The monks at Nektarios have posted a sign to notify visitors that insufficient clothing won’t be tolerated and they provide baskets filled with wraps for the ladies to cover their shoulders and legs.

Aegina is home to one of the best-preserved Greek temples; Afia or Aphea or even Aphia. (There are dozens of ways to spell Greek names and that includes islands, cities and ancient sites, so navigation can be a challenge.) Exploring by car, we wound through the countryside until we reached the temple that gives the Parthenon a run for its money. This Doric temple was dedicated to Afia, the mother goddess, and was built around 500 BC. It’s remarkably well-preserved and utterly lacks the scaffolding that envelopes most of the structures of the Acropolis. Much of its pristine pediment was preserved in the most nonchalant museum on the temple grounds. The unassuming building houses dozens of marble sculptures, including ones of Athena who is sometimes mistakenly credited with being the goddess and reason behind this great temple. 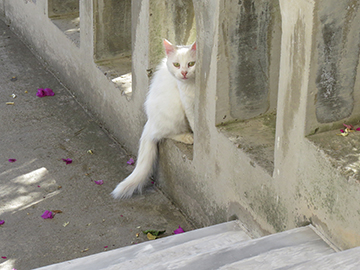 Greece is known for its omnipresent cats. They hide out in the marinas, inside churches and under tables at restaurants and they’re as much a part of Greek character as wine, boats and brightly painted doors. I could not resist them and took to carrying a bag of cat food on every excursion. More than a few of them posed for my cameras—yes that’s plural. By mid-trip I had three cameras going at any one time and lamented the lack of a photo drone. I wondered how the 1964 black-and-white movie, Zorba the Greek, captured Greece before the advent of Kodachrome. Film? Wait, what’s that?

It’s too bad that so many sailors have avoided Greece lately, concerned about social unrest and an economy that can make it hard to use credit cards in some places. But it’s exactly this bias that makes Greece such a great destination now. The crowds are few, the people are friendly, there are deals to be had on hotels and charter boats, and you can always get cash from an ATM. The unrest was invisible to us although results may vary depending on where you go. I know I’d go back tomorrow if possible because despite the 1,000-plus photos I took, I barely scratched the surface of trying to capture all the colors of a country that’s far more than just white. 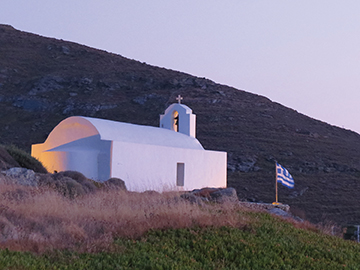