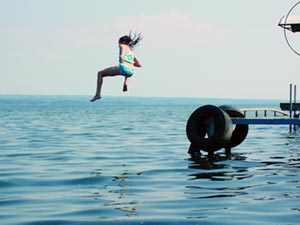 The recent fatalities of an 11-year-old girl in New Jersey and 19-year-old young man in Ohio are bringing scrutiny to an age-old summer ritual that’s common on waterfronts across America: swimming near boat docks. Initial reports say the youngster died when touching a dock’s electrified boatlift, and the Ohio teen died as a result of dangerous electrical current in the water while trying to save his father and family dog that also appeared to be stricken by the electrical current. The BoatUS Foundation, the boating-safety arm of the nations’ largest recreational boat owners group, has some tips to prevent an electrocution tragedy.

While swimming deaths due to electricity fall into two categories, electrocution and electric shock drowning (ESD), both can be prevented the same way. Electrocution can happen in fresh- or saltwater when swimmers make contact with energized metal dock fittings, boats or other structures due to faulty alternating current (AC) wiring.

ESD occurs when AC gets into freshwater from faulty wiring and passes through a swimmer, causing paralysis or even sudden death. Unlike electrocution, with ESD a swimmer does not need to be touching a boat or dock structure, and even minute amounts of electricity can be incapacitating and lead to drowning.

The risk of ESD is greatest in fresh- or brackish water, so some areas such as estuaries or rivers may only be in the danger zone after heavy rains. In saltwater, electrical current takes the path of least resistance, bypassing swimmers. Unlike a drowning swimmer, who typically can’t yell out for help because their mouth is mostly underwater, an ESD victim is often confused about what is happening, may be able to shout, and will feel numbness, tingling, pain and paralysis. Tingling in the swimmer’s body is one of the early warning signs of ESD.

What can you do to prevent an electrocution or ESD fatality? Here are 6 tips:

1. Never swim around boats and docks that use electricity.
2. Post “no swimming” signs.
3. Have a qualified electrician with experience in dock electrical service inspect your private dock annually.
4. Install ground-fault protection on your boat and private dock.
5. Ask your marina if they have installed ground-fault protection, and if the electrical system is inspected and
tested annually just in case someone falls overboard. No one should ever swim in a marina.
6. Periodically test your boat for electrical leakage into the water.

What do you do if you see a distressed person in the water near a boat dock? A drowning victim often looks “playful,” while an electric shock drowning victim looks “distressed.” It may be difficult, however, to immediately determine either, so play it safe by not jumping in. The first task is to shut off power to the dock at the breaker panel, and if equipped, disconnect any power cable to the vessel. If power cannot be shut down, follow the “reach, throw, row, but don’t go” mantra by using an oar, boat hook or throw a floatation device to reach the stricken person.