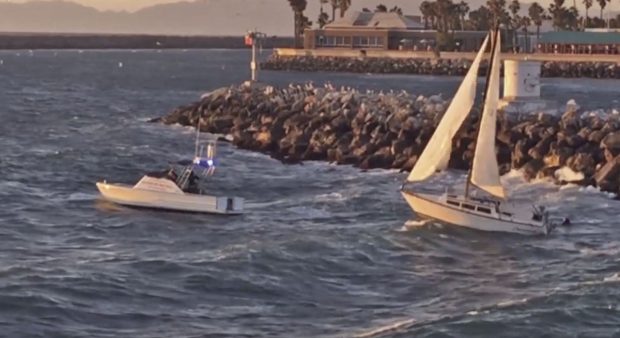 You can’t say enough good things about the men and women who man the rescue patrols around out coastlines. All boaters make the occasional mistake, and sometimes that can be life threatening. These two men and their trusty sea dog owe their lives to the Redondo Beach, CA, rescue team.

The two men rescued from a sailboat marooned on the rocks in front of King Harbor on Saturday afternoon said they thought they were going to die, according to Grant Currie, firefighter/paramedic with the Redondo Beach (CA)Harbor Patrol. Currie dove into the chilly waters about 4 p.m. Saturday to mount a rescue as partner Matt Bandy kept the patrol boat off the rocks but as close as possible to the 26-foot sailboat as it heaved against the jetty in heavy surf. At one point, the entire bottom of the boat (the keel) was visible.

“I’ve been on those types of calls when the boat is broken apart,” Currie said. “I’m surprised it didn’t break apart.” Read more.