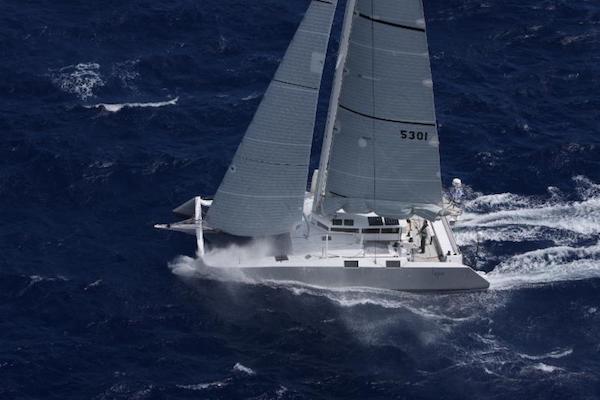 The Caribbean 600 is the big distance race in the Caribbean every winter and it attracts  a large fleet of the most exotic racing and cruising boats that are wintering in the sunny tropics. This year, the 600 got off with a bang. Read all about it in this report for Yachts and Yachting.

Greg Slyngstad’s American Bieker 53 multihull Fujin has capsized during the RORC Caribbean 600. All eight crew are reported to be safe. Stephen Cucchiaro’s Gunboat 60 Flow stood by until Dutch/ French authorities organised a rescue vessel. Preparations are now underway to transfer all crew to the safety of Port Saba.

RORC Race Manager Chris Stone issued a statement on behalf of the race organisers, The Royal Ocean Racing Club: “On Monday 19th February at 20:20 AST, Fujin capsized close to Saba Island and the eight-man crew were observed standing on the up-turned hull. All of the crew are now safe. Stephen Cucchiaro’s Gunboat 60 Flow stood by while rescue agencies coordinated the rescue efforts. Read more.