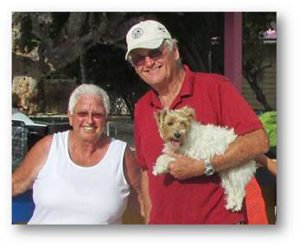 On Thursday April 28, William (Bill) Knowles, founder and first president of the Salty Dawg Sailing Association died after a long illness. As noted by a friend who had seen him only two days before, Bill had been up and about and had been able to join them for lunch despite his illness. Two days later he was gone. His partner and dear wife Linda Knowles predeceased Bill by two years.

Together, Bill and Linda were a force of nature. They were long-time sailors and had spent about a decade of their retirement years sailing back and forth to the British Virgin Island each fall and spring aboard their Jeanneau 54 Sapphire.  Swinging on a mooing in Tortola’s West End, Sapphire was a well-known landmark all winter and the Knowles were well-known for entertaining friends aboard. In summer, they sailed home to Bristol, RI, where their summer friends often joined them for gams and sundowners.

In 2011, after the Caribbean 1500, in which the Knowles had sailed several times, was taken over by World Cruising Club, the Knowles decided to break away and make the trip to the BVI with some like-minded friends. Word of this plan got out and by departure time in early November the fleet, known as the Salty Dawgs, had grown to more than 30 boats. Out of that first rally, the SDSA was born. You can read more about the ensuing history of the Salty Dawg Sailing Association here. https://www.saltydawgsailing.org/about-us

Since 2011, close to one thousand boats and some five thousand sailors have taken part in Salty Dawg Rallies and attended the SDSA educational seminars. And, true to the Knowles love of life, they also have attended numerous fun and memorable parties.

The sailing and cruising philosophy that Bill and Linda brough to their time at sea and to the rallies they started, was based on a deep respect for the ocean and for the fundamentals of seamanship, self-reliance and the camaraderie of sailors everywhere. Bill and Linda’s legacy lies in all of the thousands of sailors who have sailed in their rallies and benefited from their example.

Bob Osborn, the third and current president of the Salty Dawg Sailing Association, noted after Bill’s death, “Bill and Linda Knowles brought the salty dawg rally to life by sheer force of will, a true kitchen table beginning for what has matured into a remarkable organization, educating thousands of blue water sailors over the decade since they founded the organization in 2012.  The cruising community owes them a debt of gratitude.”

Hank George, who served as the second president after Bill, remarked, “Bill was a good friend and a fellow sailing fanatic who will be missed but not forgotten. His warm smile and engaging personality encouraged many sailors as they faced a challenging offshore passage. His passion for sailing and example of sailors helping sailors are embodied in the Salty Dawg Sailing Association and represent his lasting legacy to the world’s sailing community.”

Jo Ella Barnes, the current secretary of the SDSA board of directors, offered this remembrance. “We became good friends during our second trip to the Caribbean in 2015-16.  Our boat had transmission problems and we stayed on a mooring near their boat in West End. Linda came down with something during that time and I helped “nurse” her back to health.  My husband Matt and I went over to Sapphire every day and cooked and visited with them both even after she recovered. Bill once told Matt that his father told him, “It was important in life to have a strong handshake and be able to mix a strong drink.“ Matt can attest Bill had achieved both. “

As Matt and Jo discovered, everyone who ever knew Bill has had his or her hand crushed in his giant grip. And anyone who ever stopped by Sapphire for a sundowner, any time of day, also learned that he did not like to spoil rum with too much mixer.  Both Bill and Linda will be long missed in the cruising community.

VP SDSA Board of Directors