Here’s where to go, when you want to get off the beaten path  (published December 2014) 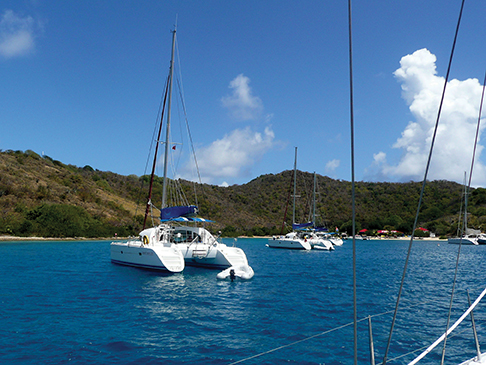 The British Virgin Islands are the most popular charter destination in the world with hundreds of bareboat and crewed charters sailing out of the bases on Tortola. With so many boats out on charter during the high season, the most popular anchorages and mooring fields are often full by early afternoon. And, the beach bars and shore side attractions are often jammed with crews out for an evening of food and fun.

So, if you like to take a night or two off and enjoy the peace and quiet of the islands, you need to seek out those special anchorages where the throngs don’t gather. Here are 10 “secret” anchorages that are often sparsely populated and great for quiet evenings and nights hanging on your own hook.

During the winter, North Atlantic gales will set up a south-rolling swell that can make anchorages on the northern coasts of the islands rolly and even untenable. But, during quiet weather in the Atlantic, the northern coast anchorages settle down and can be both beautiful and relatively crowd free.

TORTOLA
Two anchorages on the big island’s north coast stand out as special places to anchor when the weather is right. Brewer’s Bay is one of the least developed bays on Tortola and offers a serene anchorage that will really make you feel that you are off the beaten track.

Brewer’s has extensive coral formations and a reef that juts out into the middle of the bay, so you have to be careful to avoid these as you come in and as you set your anchor. Because of the reefs all around, the snorkeling is some of the best in the islands and the abundance of reef fish and underwater wildlife make an afternoon in the water special. Ashore you can have a cool one at Nicole’s beach bar or climb the nearby hills to see the remains of an old windmill and distillery. The views from up high are spectacular.

Just to the west of Brewer’s Bay is Cane Garden Bay. While this is not exactly a “secret” anchorage, it is considered by many to be one of the most pleasant uncrowded anchorages in the B.V.I. The entrance between two reefs is marked with channel buoys and inside you will find some locally maintained mooring buoys and open spaces where you can anchor. Because of the high hills around the bay, the prevailing easterly breeze can be quite shifty and you need to anchor with plenty of room for the boat to swing.

Ashore, Cane Garden Bay is famous for its sunsets and accompanying sundowners. The beach can be quite crowded during the day but as the sun sets the activity will be focused on the beach bars where you can have dinner or dance to a live band. Or, if you prefer to have a more quiet evening, you can anchor farther out in the north side of the bay where life will be more peaceful.

JOST VAN DYKE
Everyone who charters in the B.V.I. should make a pilgrimage to Foxy’s at the head of Great Harbour and the Soggy Dollar beach bar in White Harbour. But these two anchorages are crowded and can be busy with boats dragging anchor in the middle of the night. Just east of Great Harbour is Little Harbour at Gardner Bay where fewer boats will be anchored and the holding is quite good. There are beach bars ashore, or, if you still want to venture over to Foxy’s, it is only a short walk or taxi ride over the hill. There are more moorings here than there use to be but you can still find room to swing on the hook on the eastern side of the bay.

If you really want an evening of quiet away from the sound of beach bars and revelry, then you can find solitude in the lee of Little Jost Van Dyke, Green Cay and Sandy Spit on the island’s eastern tip in what is called Manchioneel Bay. There are beautiful beaches on Green Cay and Sandy Spit and the snorkeling is excellent. The only sounds you will hear all night are the wind blowing through your open hatches and the waves breaking on the eastern side of the islands and reef.

GUANA ISLAND
Guana is a private island so you can’t go ashore to explore the beaches. But, if the weather is settled, you can anchor in White Bay or farther south inside Monkey Point. The snorkeling is superb all along the west side of the island. There are moorings at Monkey Point that you can use if you have purchased a park permit. You will seldom see other charter boats at Guana Island for the night.

GREAT CAMANOE ISLAND
There are two popular anchorages on the west side of Great Camanoe Island but on the east side there is one special little anchorage at Cam Bay that only the local charter captains and old time charterers will know. It is inside the little reef just north of the Scrub Island Cut. You head for the beach to your left and then turn north to anchor in the lee of the reef. There is not a lot of room in the bay so you have to get your hook down fairly early to secure a spot. The diving is wonderful along the reef and you will have plenty of solitude for the night. Plus, it is only a short dinghy ride to Marina Cay if you want to go ashore for drinks and dinner.

VIRGIN GORDA
For most charterers, Virgin Gorda means a trip to the Baths south of Spanish Town and then a day or two in Gorda Sound to the north where you can play at The Bitter End Yacht Club, Saba Rock, Leverick Bay and Biras Creek.

But for those who want a night in splendid isolation under the green hills and protected by the barrier reefs, then Pond Bay is the place for you. Located in the middle of the big bight on the island’s western shore, the bay lies inside a long reef and just off a perfect white sand beach.

The entrance to Pond Bay is just north of Blowing Point. You head southeast into Savannah Bay and then turn northeast while keeping in the deep (darker) water between the reefs. Once off the beach, you can anchor in 10 to 12 feet over soft sand. The snorkeling is great here and you will most likely have the anchorage and the beach to yourselves. The view of the setting sun over the hills of Tortola is spectacular.

PETER ISLAND
The resort at Peter Island is world famous and the anchorage nearby in Great Harbour is fine in settled conditions and is likely to be uncrowded. But, to enjoy one of the best “secret” anchorages in the islands you can join the off duty charter crews in Little Harbour to the west, which is one of the prettiest anchorages in the B.V.I. The standard procedure is to anchor stern to the beach with a line ashore to hold you in place. This keeps you from swirling around your anchor rode as the little williwaws puff down the steep hills into the bay. Ashore you will find a rocky beach.

NORMAN ISLAND
One of the most popular islands for charterers because of the new and excellent beach bar and the famous floating bar called the Willy T, the Bight at Norman Island is usually full of boats and revelers. You can still enjoy the nightlife in the bight but find a little peace and quiet by anchoring or picking up a mooring at the mouth of the bight just inside Water Point. The water is lovely and clear, the snorkeling excellent and you will get a bit more breeze at night to keep you cool. 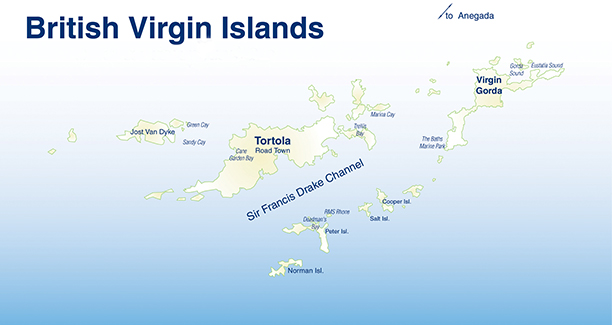 If you want to spend the night at a slightly more remote anchorage, while still having access to the walking trails and even the beach bar, then Benures Bay on the island’s north coast is a fine anchorage. You will find good holding in 15 feet of water in the northeast corner and a rocky beach ashore. The snorkeling is great off the northern point.