Dawn arrived slowly. The night had wrapped its blanket of darkness around this beautiful Caribbean island and seemed reluctant to release its grip. From the deck of my chartered cat, I watched the emerging sun inch above the horizon in slow, deliberate movements, brushing away the last vestiges of the night’s murkiness.

The sun’s rays began to ease down the lush hillside surrounding Marigot Bay on the French side of St. Martin, coaxing the plants, flowers, trees and shrubs to erupt into color and erasing the shadows that concealed this appealing anchorage.

Not far away, near the harbor entrance, I could make out the masts of other sailboats—like silver columns holding up the roof of heaven. There was a faint hint of an autumn wind that danced across the water nudging our 55-foot catamaran, encouraging it to tug against its moorings, as if to say it, too, was ready for another day of adventure. 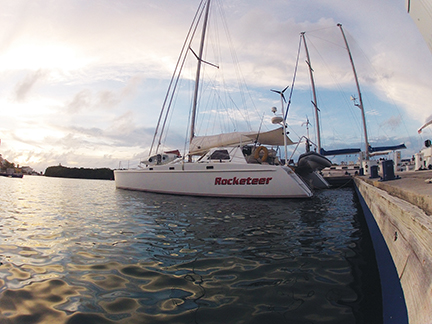 This was only the second day of a week-long charter aboard the sleek cat Rocketeer captained by Glenn Howell, and his first mate, Grassa Ramos, a woman of Brazilian ancestry whose delicious meals surely merit more than a single notation in this narrative. The pair was host to me, my wife Dene and my daughter Robin, her husband Sean and my granddaughter Gabrielle, a vivacious 9-year-old. Our week-long cruise aboard Rocketeer began in St. Martin and our plan was to sail southward to St. Kitts and then back. 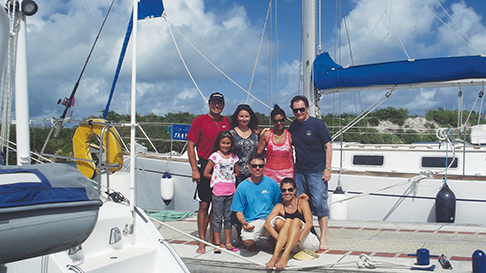 Sailing vacations have become an integral part of my life over the past 30 years, and I am always eager to share this passion with friends and family whenever the occasion arises. My granddaughter could scarcely contain her enthusiasm when I first proposed the idea to my daughter and her husband. Now, Gabrielle, who had never sailed with us, was old enough to join in the fun. She was ecstatic!

It was a warm day in late October when we landed at Princess Juliana airport in St. Martin, where we were met by Glenn and Grassa. After brief introductions, we were told that we need not worry about taking a taxi to the wharf where their cat was anchored. Instead, we could dinghy to the boat from a dock across the street from the airport parking lot. For Gabrielle, it was an incredible beginning to this new exploit.
The dinghy skimmed across the jade colored waters of the bay for only a few minutes before we caught sight of the white cat that would be our home. Inside and out, it was roomier than a monohull, with a living room-sized saloon and four comfortable cabins.
Rocketeer’s speed and agility gave us the opportunity to island hop and discover as many unique anchorages as possible in one week’s time.

After an initial briefing, we hoisted anchor and left Simpson Bay on the Dutch side for an evening sail to Marigot. Early on that second day, as the town began to stir, the smell of Grassa’s coffee filled the air. We began this day as we would others with a hearty breakfast followed by a morning swim.

Only yards from our yacht, we encountered a green turtle, several stingrays and throngs of schooling fish seemingly unconcerned with our presence. Even our shouts and frantic pointing failed to alarm these unassuming creatures. We reluctantly swam back to the boat because I had promised Gabrielle a visit to the town and a hike up to Fort St. Louis, a stone remnant dating back to the 17th Century that was worth exploring and offered a panoramic view of the town and the harbor.

In St. Martin, yachtsmen can take pleasure in two cultures — Dutch and French. Marigot has a certain European flavor, and most shops and stores sell French perfume, clothing and fine art, while local vendors offer handmade carvings, fresh fruit and Caribbean art. On the Dutch side, you can shop on Front Street, meander along the boardwalk facing the beach and stop at an outdoor café for a cool drink. The merchants here are famous for their gold jewelry, watches and electronics.

This island is welcoming to yachts and is noted for the Heineken Regatta that takes place every year on the first weekend in March. It also provides enough activities to fill a week’s charter without ever leaving its cruising grounds. But we had more ambitious plans, yearning to feel the salt spray in our faces and make some new landfalls.

ST. BARTH’S BECKONS
After routine stops for swimming and snorkeling at Isle Pinel and Oyster Pond, we turned south for St. Barth’s. In St. Barth’s, you’re able to tie up at the dock in Gustavia and step onshore rather than anchoring. The red roofs of this typical French island gleam in the intense sun, and after a casual stroll around town, it’s obvious why St. Barth’s is a favorite haunt of the rich and famous. There are great restaurants and bars, upscale boutiques and patisseries where French pastries tempt even the strictest dieter.

After checking in, we motored south of Gustavia for some snorkeling but found little to see, so we decided to leave very early the next morning for St. Eustatia. It would be a long sail and give us the first chance to see how well Rocketeer handled the open sea. The Chris White-designed cat, which sports a unique forward cockpit, easily mastered the cross-currents and light winds, and made reaching these extended cruising areas a joy.

Most captains—and Glenn was no exception—encourage you to try your hand at the helm and to help out with raising and lowering the sails, setting the anchor and trimming the sheets. You’re certainly not required to take part, but if you do, you’ll understand why sailing and the sea are so mesmerizing. Sean became a valued deck hand and relished the chance to help crew the boat.

STATIA AND ST. KITTS
We reached St. Eustatia in just under seven hours, tacking several times along the way. “Statia,” as it is known, was a major trading center in the 17th and 18th centuries but early support by the local European population of the American Revolution brought down the wrath of Britain upon the island and it was virtually destroyed in a blaze of cannon fire.

Nonetheless, the island is still notable for its nature and marine life and the capital of Oranjestad is worth a visit. That said, when we arrived we found a fleet of tankers lined up off  the refinery at the north end of the island; the odor and noise of these behemoths made our overnight stay unpleasant so, at first light, we hoisted the anchor and made for St. Kitts.

We were already into our fourth day and after St. Kitts, we would do nothing but sail back to St. Martin in time for our return flight to the U.S. There is a lot to see in St. Kitts and for us, so little time.

St. Kitts is almost twice the size of its sister island, Nevis (68 square miles versus 36). Both are of volcanic origin, with St. Kitts’ three mountain ranges converging into Mount Liamuiga, nearly 4,000 feet above sea level. These ranges are surrounded by dense rainforests that are flush with monkeys, tropical birds and abundant plant life. The stunning scenery is complemented by the clear, blue sea—a snorkeling and diving heaven, dotted with reefs, shipwrecks and underwater gardens that harbor fish and mollusks of every size and description.

St. Kitts’ shoreside activities are concentrated in the capital of Basseterre, where colonial buildings surround Independence Square, dominated by a replica of London’s Big Ben. There are shops around the square, restaurants, a marina and duty-free stores. At the commercial port, there is a mall and more shops if one is so inclined.

But, if you’re only on the island for a brief visit, there are certain sights you mustn’t miss. At the top of the list is Brimstone Hill fortress, one of the most formidable and dramatic structures in all the Caribbean. As you approach this citadel at the north end of the island, the smell of sulfur fume is evident — escaping from a vent on the shoreline. 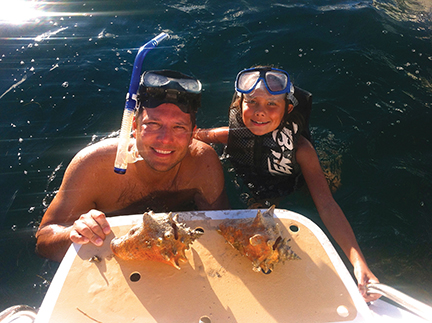 Built by the British in 1690, the fortress covers 38 acres and affords a 70-mile panoramic view. On a clear day (and there are many), the islands of Anguilla, Montserrat, Saba, Statia, St. Barth’s and St. Martin can be seen in the distance. We looked at these islands wistfully, knowing full well that on the following day, we would be onboard Rocketeer again flying over the Caribbean Sea on our way back to St. Martin and the end of this enchanting week of family fun and discovery.

Gabrielle summed up our dilemma. “I love it here,” she said as we looked out over the sea. “Do we really have to go home?”

Well, there is always next year.

Tom Wuckovich is a free lance writer living in Tampa, Florida and former senior editor of AAA Going Places magazine. He is a member of the Society of American Travel Writers and has been sailing occasionally for more than 30 years. His favorite destination is anywhere in the Caribbean and he would live there if the opportunity came along.

View all posts by Tom Wuckovich