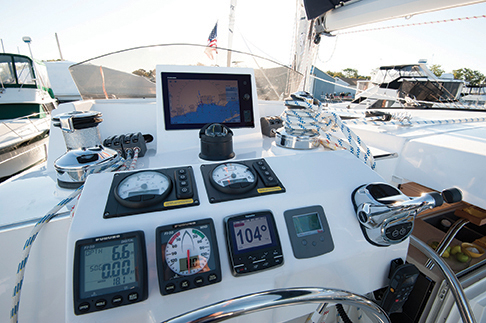 They call it “re-shoring.” That’s a made up word that is supposed to describe the business of bringing manufacturing and jobs back to the shores of America from low cost countries around the world. It’s a great concept and it’s happening in the world of cruising cats right before our eyes. First, Gunboat relocated to the U.S. after launching the company in South Africa and China. Now, multihull impresario Gregor Tarjan has launched the Alpha 42 cruising cat, which is being built in Patchogue, New York, right on the southern shore of Long Island.

It was there in October that I met Gregor and his friend Wes aboard hull number two of this new design. The boat had been launched the previous week and had been out daily for sea trials with potential customers. I would be the first journalist to see the boat and review it. 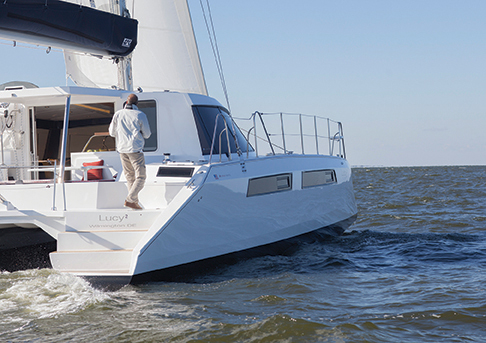 The Alpha has a very distinct and modern look. Gregor has always admired the work of Luca Brenta and Wally Yachts and wanted his new creation to have a similar futuristic aesthetic. The reverse, wave piercing bows, high topsides with subtle chines and large, dark, wrap-around windows all combine to achieve this goal. There is no other cruising cat out there that looks like the Alpha.

With Gregor at the helm using the twin engines expertly to get us away from the dock in a stiff cross breeze, we headed out into Great South Bay. The sky was clearing after a gray start to the day, the breeze was up and piping at 20 knots or so and the bay was choppy and flecked with white caps. Perfect.

We got the big square-top mainsail hoisted easily with its two-part halyard and then rolled out the 110 percent jib. The Alpha skipped ahead nicely and at about 160 degrees to the apparent wind she settled down to a happy 10 knots on a broad reach.

The Alpha’s wave piercing bows did not get much of a workout on the flat water of the bay, but we did have a lobster boat out with us with a photographer aboard. We asked the skipper to run across our bows a few times while throwing a big wake so we could see how the bows would react. True to the design’s intent, the bows pierced the waves and reduced the boat’s pitching motion significantly.

We jibed back and forth down the bay to maintain the fastest reaching angles and then hardened up to beat back toward Patchogue. You can handle all of the lines—halyards, sheets and reefing lines—from the raised helm. The lines run back from the mast in a conduit inside the cabin top and through line stoppers that are served by two self-tailing winches. A third winch is a useful option.

Upwind, we were able to sail at about 45 degrees to the true wind and saw a steady eight knots on the speedo. In the puffs, our boatspeed crept over nine a few times to everyone’s delight. The Alpha is very easy to handle for a lone watch keeper, which makes it a great couple’s boat. Visibility from the helm is excellent so attending to sail trim or maneuvering around the marina is always easy.

On the way back to the marina, we dropped sail and motored for about two miles to get a feel for how the Alpha handles under power. The twin Yanmar 30-horsepower diesels push the boat at eights knots at 2700 rpms and will keep her at six knots at a more economical 1800 rpms.

At cruising revs, the engines will each burn about a third of a gallon per hour or two thirds together. With 140 gallons of fuel in the tanks, the Alpha has about 200 hours of motoring capability or a maximum motoring range of about 1,200 miles. For those heading off around the world, where you often have to motor long distances in the doldrums, this range will be a great comfort. 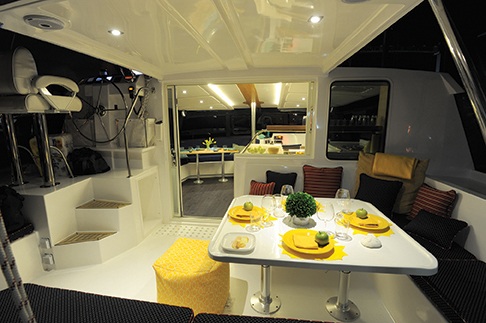 The Alpha was conceived from the first day to be a couple’s cruising boat that is capable of long distance passagemaking. And, it was designed to be comfortable for a couple or a family to live aboard. While I was visiting with Gregor on Long Island, he was also entertaining the couple who had a deposit on hull number seven that will go into build in early 2015. They had flown in from their base in Singapore specifically to see hull number two. Their plans were simple. A year after they take delivery of their new boat, they plan to move back to the States, take their kids out of school and head off for a cruise around the world. Their excitement was infectious.

Before heading out for a sail, we all took a quick tour of the Alpha factory where hulls number three and four were in the middle and late stages of completion respectively. The boats are built using high tech composites and components to ABYC and NMMA standards. The laminates are all vinyester with Nydacore coring above the waterlines and in the decks. Below the waterlines, the hulls are solid fiberglass for strength and durability. A collision bulkhead is fixed into each bow and stress points such as at the chain plates are reinforced with carbon fiber.

The keels are not integral with the hulls but are instead fitted into recesses in each hull. Should the boat run around or hit something at sea, the keel can be damaged without penetrating the hulls. The rudders have solid stainless steel stocks and full stainless steel reinforcing panels inside each foil. The bridge deck has a generous 34-inch clearance and is shaped with a nacelle down the middle that adds stiffness, strength and dampens the effects of waves slapping the underside.

Interior bulkheads, furniture panels and overheads are all cored with honeycomb cores that make the pieces very stiff but also very light. Even the Corian counters, which are made on site, have honeycomb cores.

The 42 comes with three interior options. The boat we were sailing was heading to the Caribbean to sail in the TMM charter fleet out of the British Virgin Islands. It had the four-cabin two head interior, with large double berths aft in both hulls and two smaller doubles forward. The heads and showers lay between the cabins.

The owner’s version has two cabins in the starboard hull and a large owner’s suite to port. You can also opt for the Super Owner’s version that has master suites in both hulls and no cabins forward. 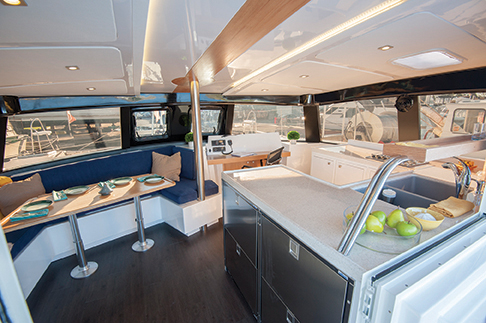 The saloon and after decks flow together on the same level. The saloon door slides away out of sight, as does a glass panel over the galley; with these open, the interior and exterior spaces flow together nicely. The U-shaped galley lies to starboard and is large and useful and equipped with everything a cook would need. The boat was fitted with four pullout drawer fridges as options so you will be able to carry a ton of fresh or frozen items.

The main table sits four comfortably and with two stools or small folding chairs added will seat six. The 360-degree view from the saloon table through the windows is nothing short of spectacular. The tinted windows run from the cabin top to the deck and have hidden joints and seams so you get the impression that the cabin top is almost floating over your head.

The nav station faces forward at the front of the cabin with excellent views. This will be the ship’s office and command center. And, in inclement weather, this is where you will stand most of your watches with the aid of an autopilot and a multifunction display for charts, radar and AIS.

The new Alpha 42 is a fun and innovative addition to the cruising catamaran fleet. Gregor has poured 25 years of multihull sailing, racing, selling and building into the design and his partner—a veteran boat builder with hundreds of boats out there sailing—has embraced the latest building techniques. The boats are finely finished and built on a semi-custom basis for each unique owner. 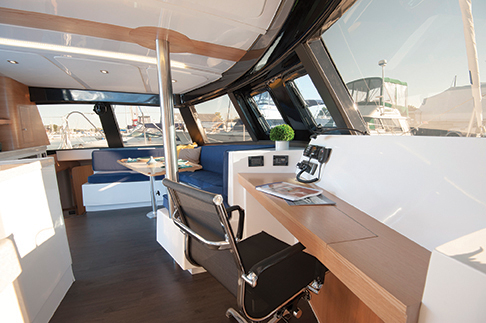 American designed, engineered and built, the new Alpha 42 makes a dramatic statement about what we can achieve by building right here at home. In the face of stiff competition from builders in France, Poland, South Africa, Australia and South America, the team at Alpha are succeeding by delivering high quality, high tech, ultra modern boats that are built without compromise for long-haul cruising.