As we rounded Sarah Point on Malaspina Peninsula and made our way into Homfray Channel, our jaws dropped and mouths went agape. In front of us, British Columbia’s Coast Mountains shot straight from sea level to dramatic peaks hanging 6,500-feet overhead. The site was breathtaking, one that, months later, has Jill and me dreaming of our next visit to the incomparable natural beauty and solitude of Desolation Sound.

In 1792, though, Captain George Vancouver and his crew had a tougher go of it when they came into the same waters during their survey of the Inside Passage. Socked in by clouds, fog and eventually darkness, they tried to take soundings in order to find a suitable anchorage and when none was located, they drifted in a variable breeze until they could come up with a place to finally drop the hook. Vancouver named Desolation Sound for what he saw as a dreary, inhospitable mountainous area with little usable shoreline and precious few resources.

All these years later, and Desolation Sound is now one of the premier and most visually stunning cruising grounds in British Columbia, if not all of North America. And you’re just as likely to share an anchorage here with circumnavigators as you are charterers, because it is a truly awe-inspiring destination that draws everyone. Despite what Vancouver experienced, it really is that good.

DESOLATION FOUND
Desolation Sound is literally at the end of the road (or beginning), as it lies beyond the northern terminus of Highway 99, which stretches from Tierra Del Fuego, Chile to Lund, British Columbia. Being that to this day no roads can be found leading into Desolation Sound and no ferries weave through its waters, it is truly a wild coastal cruising ground devoid of amenities and trappings that inextricably change the face of many touristy cruising zones. Even coming from Vancouver or Seattle by car takes two ferries and several hours of driving to even get close.

Relative to the surrounding area, Desolation Sound Marine Park is actually quite small. The park can be transited from one end to the other easily in a day or few hours of sailing and there are a plethora of anchorages, nooks and hidey-holes to tuck into, drop a hook and take a stern line to shore. But when you hear cruisers speak of Desolation Sound, they’re typically referring to the park and to the many islands and inlets surrounding it, which are known as the Discovery Islands. Just outside of the park’s boundaries there are a few places to stop for provisions, fuel and water, but they are mere outposts run by hearty locals and seasonal help that are just as enamored with the area as are the boating hoardes they serve. Coming from the south, the village of Lund is truly your last stop before heading into the solitude of Desolation Sound.

Besides the absolutely staggering scenery, what makes Desolation Sound so remarkable for summertime cruisers is that water temperatures can reach 70 to 80 degrees—ideal for swimming on a hot day. The cause for this local rise in water temperature is best described by the BC Parks, “Three very important factors influence the movement of seawater in Desolation Sound in such manner as to create the warmest water on the British Columbia coast in summer. First, the maze of islands restricts the colder Pacific waters mingling with those of the Strait of Georgia. Second, the tidal currents flowing around Vancouver Island meet in this area. Third, the warming effects of incoming tides flowing over sub-baked tidal flats and outflowing water from shallow lakes and lagoons together create the phenomenon of effectively raising the water surface temperature in Desolation Sound to up to 80 degrees Fahrenheit.

UNFORGETTABLE CRUISING
This was our first foray into the Sound and everyone we’d consulted with before going there gushed and raved about the place. We had three and a half weeks to burn before needing to be in Campbell River so Jill could make her way to hop on a friend’s boat for a delivery south to San Francisco, and we took our time to discover as much as possible about the place.

Although it was July when we arrived and August when we left—the peak season for cruisers in Desolation Sound—we found plenty of spots to anchor and for the most part never felt like we were boating amongst a crowd of other cruisers. Sure, there were lots of boats, but the Sound, coupled with the great expanse of the adjacent Discovery Islands alleviated any congestion we might have felt. And it really made us want to come back in the shoulder or offseason to explore it truly on our own.

On our second day in the area, we bumped into a friend from Seattle aboard his Maple Leaf 42 Cambria and he invited us to join him and another boat for a raft-up at Isabel Bay, down Malaspina Inlet. Always in for a good raft-up, we obliged and found what would be our first of many memorable anchorages within Desolation Sound Marine Park. With the sun shining overhead till late in the day, we kayaked, swam and hiked around the anchorage in the way that carefree cruising is all about. Potluck dinners aboard created raucous laughter followed by late night swims in the tepid water. One day quickly turned into three and we all reluctantly went our separate ways to re-provision, find new anchorages or head back south.

From there our weeks became a game of “Where do you want to go next?” and “This place is great, want to stay another day?” The warm waters that so famously fill the area were not exaggerated and we found ourselves in and out multiple times a day. Porter, our energetic two-year-old, loved jumping from the boat into our arms and begged for more when it was time to retire from a day in the water. Much to our delight, we also discovered many lakes that were just a stone’s throw from anchorages. Fresh water bathing was a welcome respite from the salt and we found the water to be about the same temperature or slightly warmer than what was under the boat. When we weren’t swimming from the boat or in lakes, we’d wait until an incoming tide would flood in to cover sunbaked rocks and beaches. There we’d wade, sunbathe and play as the warm currents flooded into our heavenly swimming holes.
When it came time to get diesel, propane, water and provisions, we made for bucolic Refuge Cove on the southern tip of West Redonda Island. Greeted by uber-friendly folks working the co-op, we delighted in fresh baked treats at the small bakery and perused the book selection while sipping cups of coffee. This tiny enclave is a true cruisers’ stop, and we even had to wait at the store one Tuesday afternoon for a shipment of fresh eggs and milk to arrive.

During the only two rainy days we had of our three weeks in the area, we made our way north from Refuge Cove up the island to Teakerne Arm and the famous Cassle Lake Falls. The arm is quite deep and there is only room for a handful of boats to anchor and bring a line ashore. The trick here is to drop your hook a couple hundred feet down and back it into the mud and sand slope. We let out 250-feet of rode and ended up just a boat length from a rock wall. The vigorous hike up to the lake was welcome exercise and even though the falls were hurting for water, they were fun to climb through and kayak under.

After leaving Teakerne Arm we could feel that our time in the Desolation Sound was coming to a close and while working our way westward through the Discovery Islands towards Campbell River on Vancouver Island, the water got a little colder and we longingly reminisced about anchorages we’d loved just a few days and weeks prior. We missed it already.

With mountains that shot straight up from sea level and a glut of picturesque anchorages, the scenery surrounding Desolation Sound is dramatic, inspiring and downright jaw dropping. And I can’t think of any single North American coastal city besides Vancouver and Seattle that is this close to such wonderfully stunning mountain scenery coupled with unparalleled cruising.

It’s unreal. And we can’t wait to get back.

PROVISIONS
Rare is a boater who comes to Desolation Sound for a mere week where food, water and fuel can be brought in and consumed with time to spare before getting back out. Also, there aren’t many places to get rid of garbage, so you’ll find yourself needing a place to stop at least a few times while you’re in the area. Apart from the village of Lund, Squirrel Cove, Gorge Harbour and Refuge Cover are possible options.

SQUIRREL COVE
On the eastern side of Cortes Island, Squirrel Cove has a public wharf that grants you access to groceries, marine hardware, liquor, Wi-Fi, Sunday market, fuel and two restaurants.

GORGE HARBOUR
The western side of Cortes Island has one of the best natural harbors anywhere in Gorge Harbour. Here you’ll find Gorge Harbour Resort, which has a small grocery store, fuel, guest moorage and facilities that include a swimming pool, hot tub, showers, laundry, Wi-Fi and more. If you don’t want to utilize the guest moorage, you can anchor and dinghy ashore to find provisions.

REFUGE COVE
Located on the southern tip of West Redonda Island, the cove has a trash barge to drop bags (for a fee), propane, diesel, gasoline, water, a small grocery store, cafe, art gallery and plenty of good people watching. 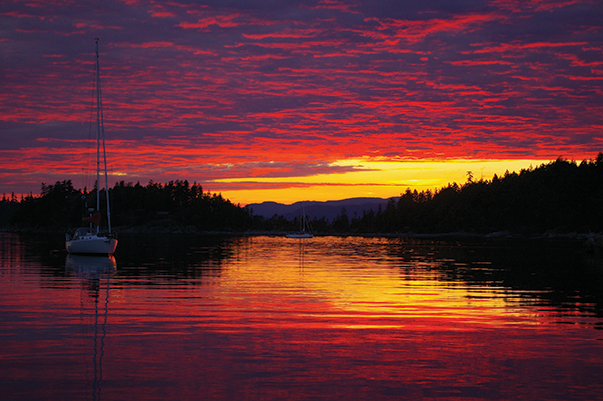