There is nothing quite so awesome as a warm breeze at your back, your biggest spinnaker pulling strong and the horizon ahead in a wide arc like outstretched arms just waiting for you. That’s the way it is for many cruisers, but for others it’s turning the engine on in an effort to keep some speed on the boat.

Downwind sails, especially spinnakers, are intimidating to many sailors, but they shouldn’t be. Let’s look at some options not only for managing spinnakers but also some alternative options to spinnakers for sailing off the wind. There is a lot to consider. 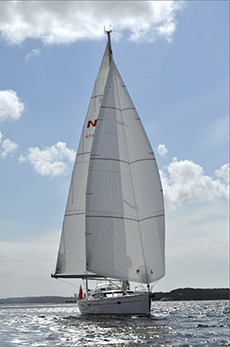 Asymmetrical spinnakers are becoming very popular and have largely replaced symmetrical spinnakers. The reason is that asymmetrical spinnakers don’t need all that stuff like spinnaker poles, topping lifts, after-guys fore-guys and the rest. All you need is a halyard, a tack point, a place to sheet the sail and off you go. But there are many sailors who worry about getting caught with the spinnaker up in a building breeze and that is a very real concern. Fortunately, sailmakers and hardware manufacturers have been taking notice and there are a number of new products on the market to deal with downwind sails.

Let’s look at a couple of different options of how you can manage your asymmetrical spinnaker. There is the tried and tested spinnaker sock which when used with some simple techniques can tame a sail even in a building breeze. More recently there has been the introduction of top-down furlers and for flatter, reaching spinnakers there are line-drive furlers coupled with anti-torque lines built into the luff of the sail.

It’s understandable why many sailors are reluctant to use a spinnaker sock. There are a lot of lines to deal with but rule #1; you need a good sock. It has to have a rigid, flared hoop at the bottom, sometimes called a potty. The flare allows the hoop to be pulled over the spinnaker as you douse the sail. Secondly, the control lines need to run in their own pocket separate from the sail so that they don’t get tangled. Then, there are some basic techniques. 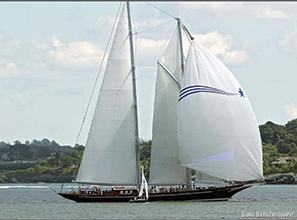 Remember one important thing when using a sock: The dead air behind your mainsail is your friend. You need to be sailing at a fairly deep wind angle when you are both hoisting and lowering the spinnaker. It’s completely calm behind the main. Make sure that you don’t pull on the tack line or the sheet until the sail is completely hoisted. Once hoisted take up on the tack line and then take in on the sheet. As you pull on the sheet the potty will start to slide up the sail. In fact you often don’t even need to use the control lines. Once the spinnaker gets some air it will fill tautomatically and push the potty to the top of the sail.

To douse the spinnaker do things in reverse. Sail a deep downwind angle so that the spinnaker starts to collapse in toward the lee of the main. Release the sheet and tack line and pull down on the sock. Here is a good tip: Install a snatch block on the rail and run the sock control lines through it. This way, when you are dousing the sail, you will be pulling up on the line that runs through the block with your feet squarely on the deck as opposed to dangling under the sock pulling downward.

While these methods work well for asymmetrical spinnakers, using them on a symmetrical spinnaker is a bit more complicated but let’s not turn our backs on the old fashioned symmetric just yet. For those cruisers going long distances, especially in the Trade Winds or other areas when the wind is steady and predictable, setting a symmetrical spinnaker is a much better option than using an asymmetrical. For a start you can sail deeper downwind angles by rotating the sail out to windward. Sure there is more work involved in getting the sail set, but if you are sailing in steady winds you can often have the spinnaker set on the same tack for days at a time. Contrast that to an asymmetrical where you have to sail more “heated” angles to get the sail to fly, and you have to gybe often to keep your downwind course.

On some boats there is barely enough room on the bow to set an asymmetrical, but this can be alleviated by the addition of a bow sprit. There are a number of manufacturers that make a simple sprit that can be added to most boats. This allows you to get the tack of the spinnaker out and away from the headstay. If you do set from the bow there is a useful gadget called a Tacker. This keeps the tack of the sail close to centerline and not drifting off to leeward. 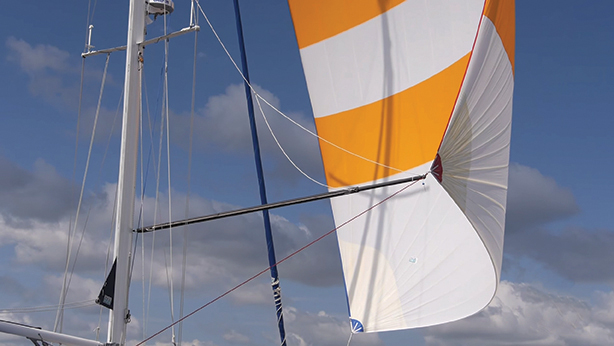 Despite all these advances in sail handling equipment there are some sailors who simply will not set a spinnaker. Luckily, there are other options and one of the most common is to set a headsail out to windward with a whisker pole. Let’s be clear, a modern whisker pole is not like the old ones used back in the day. A modern whisker pole is light, stiff and in some cases, telescoping. Because it will not see the loads of a spinnaker pole, it does not have to be as sturdy; however, many people still found the old whisker poles heavy and cumbersome. To deal with the weight issue manufacturers are using carbon on the extension part or making the whole pole out of carbon fiber. For smaller boats, there is a twist lock option where you extend the pole to the length you want and then twist the inner section to lock it in place.

The most convenient place to stow a whisker pole is on the front of the mast. Hardware manufacturers supply a track to which the inboard end is attached. There are also some clips to secure the pole when not in use. It’s a simple matter of taking the outboard end, attaching a topping lift, and swinging it away from the mast as the inboard end is lowered. You can lead the headsail sheet through the end and raise the pole to be parallel to the water. Use the control lines to telescope the pole to the desired length and lock it off. When it comes time to set the sail you simply pull on the headsail sheet and unroll the genoa. With the pole aft the projected area allows you to sail deep downwind angles and if there is a sudden increase in wind strength you have two options; you can either roll the sail away completely, or shorten sail to a more comfortable sail area and reduce the length of the whisker pole correspondingly.

When you are sailing dead downwind with a poled out headsail, the wind is blowing down the sail. You will often see the water ahead of the boat being ruffled by the downdraft. However, when you heat up the angle a little the wind will start to flow across the sail.

You might want to consider setting another sail to leeward to take advantage of the wind flowing off the sail. If your furling unit has a second groove and you have a spare halyard you can use it to set another sail, perhaps a smaller one. You might also consider having a second whisker pole and poling out both headsails. This is not necessary if you are not sailing dead downwind, but if indeed you want to sail very deep angles then having both headsails poled out is a great solution. 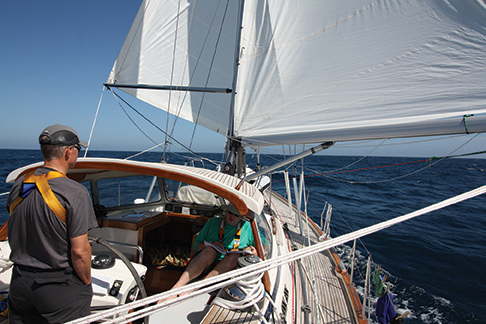 Remember that when sailing downwind boats like to be pulled by headsails or a spinnaker rather than pushed by a mainsail. With this in mind, you may want to reef or lower the main if you are using twin poles. And, as already noted, as the wind increases you can reef both sails at the same time and reduce the length of the whisker poles.

We make a great product called the Great Circle Cruising Solution. It’s two downwind sails that have the exact same dimensions and the exact same chord depth. They are the same design except that one of them is made from a lighter fabric than the other. What’s unique is that they share a common luff tape. The lighter fabric is set to windward with the whisker pole when sailing off the wind and it projects sail area while at the same time feeding wind into the sail to leeward.

As the wind increases you can roll the sails up; they will reduce in area proportionally. As a downwind combination, they work great but better yet the sails double as your working genoa. Once you come onto a reach you ease the windward sail so that it lays against the one to leeward and use the two together just as you would with any working headsail. Two lighter sails set well for downwind sailing; combined they are strong enough to be used as a working genoa. 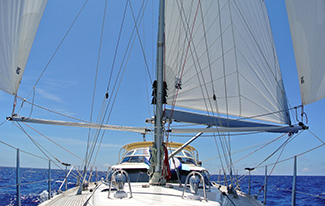 Downwind sailing is fun sailing. It’s when the crash banging stops and the boat becomes level again. It should be fun and can be fun with some of the newer products on the market that were developed specifically for those sailors who were never comfortable setting too much sail to get them downwind.

A veteran of many offshore races and multiple circumnavigations, Brian Hancock is a sailmaker who lives in Marblehead, MA.