When Dean Matthews and I arrived in Bermuda to help our friend Chris Bouzaid deliver his 60-foot pilothouse sloop back to Newport, R.I., there was just one thing on our minds: the deep low pressure system that was parked south of Nantucket and directly on our route home.

Waianiwa is a Bill Dixon-designed, New Zealand-built ocean going cruising boat that Chris has sailed all over the world, including a daring cruise to the South Auckland Islands deep in the Southern Ocean south of New Zealand. That was a tough, storm tossed trip. As Chris’s wife Lydia quipped to Chris later, “Hey, the next time you suggest we go see some penguins, how about we go to the zoo instead?”

But Waianiwa had managed the trip well and has since carried Chris and Lydia tens of thousands of miles, including a recent trip to Newfoundland and the Labrador coast. With a fully functioning pilot house, you can sail the boat from the comforts of the cabin with full visibility and an inside steering station. This makes high latitude cruising much more bearable and life at sea, even in wet and gloomy weather, more comfortable and warm than on most boats.

And, Waianiwa, which is Maori for “pot of gold at the rainbow’s end”, is fast, too. With a moderate displacement and a long waterline, the boat can cruise at eight knots all day and in a good breeze deliver steady 200-mile days on passage. It is 635 miles from Bermuda to Newport along the rhumbline and we initially expected to make the trip in less than four days. Except for that deep low that was in our way. 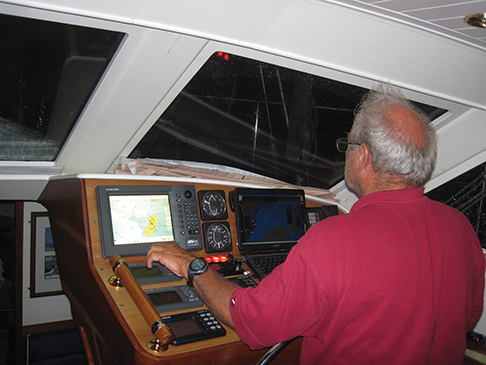 Chris likes technology. On the saloon table, when I lugged my sea bag below, there were three cell phones and two laptop computers all switched on. One of the computers was running the routing software MaxSea while the other was running a new weather routing program called PredictWind that Chris likes.

Over cups of coffee, we pondered what the routing software was telling us. MaxSea was taking the seven day forecast (in downloaded GRIB files from France) and showing the deep low slowly sliding eastwards over the next several days which would deliver northwest and then northerly winds to boats heading for Newport.

Behind it, there was a cold front that MaxSea figured would move over New England as the low departed bringing fairly brisk northwest winds behind it. MaxSea’s route for us was to sail the rhumbline northward until we met the northwest winds and then head northeast out to sea until the wind shifted and we could make Newport on a close-hauled tack. The proposed route entailed sailing upwind for 635 miles in breezes over 20 knots. Not fun.

PredictWind was telling a different story. Their interpretation of the forecast showed the low pressure drifting slowly to the northeast with the cold front sliding in behind it, possibly becoming a second low and moving through more quickly than the MaxSea forecast. The route PredictWind calculated for us was somewhat radical. It called for us to leave Bermuda and head for Newport. As soon as we hit the northwesterly breeze we should tack onto starboard tack and reach slightly south of west in a northwest breeze for 36 hours in 15 to 18 knots of wind until we got to the Gulf Stream off Cape Hatteras. Then, with the northwest breeze following the cold front easing to the west and southwest, we’d have a Gulf Stream-assisted reach all the way home.

This second route provided by PredictWind sounded a lot more promising but was so different from what MaxSea was telling us and added so many miles to the course that we hesitated to accept it right away. We needed a tiebreaker.

We decided to call Commander’s Weather to see what their weather gurus and routing experts had to say about the situation. Commander’s is one of the best commercial ocean routing companies in the world and has proven over the years to be reliably accurate in their forecasts and well plugged in to the needs of sailors at sea. They took a look at the situation and essentially agreed with PredictWind. The best choice for the passage to Newport would be an end run around the back of the low by sailing west for almost two days and then turning north. The tie was broken and we were ready to head to sea.

Incidentally, several other boats were in Bermuda at the same time preparing to make the passage back to Newport and those skippers decided to sail the rhumbline more or less as MaxSea suggested. 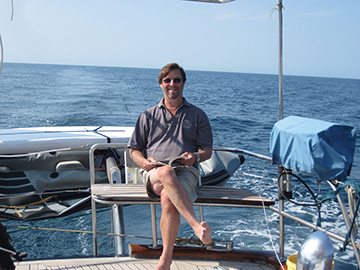 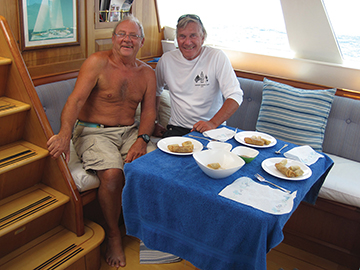 The three of us aboard Waianiwa had made the passage to and from Bermuda numerous times but never have we rounded Kitchen Shoals and Northeast Rock and shaped a course due west. But that’s what we did on this trip.

The sky was patchy overcast and the wind blowing 15 knots from the north. We hoisted the in-boom furling mainsail and rolled out the genoa and were on our way as the big sloop gathered her skirts and soon was making a steady eight knots with surges to nine or more.

With the seas more or less on our beam, the ride that first night as we sailed toward the setting sun was a bit rolly but perfectly comfortable. We settled into the three hours on and six off watch system right away and soon the old rhythm of the sea took over.

I always sleep a lot and deeply in the first 24 hours at sea so it was something of a surprise when I awoke for my 0300 to 0600 watch the next morning to find that the breeze had backed a bit to the northwest and built to 18 to 20 knots. Waianiwa was charging along nicely. Chris had rolled one reef into the mainsail so the boat didn’t labor or gripe as the seas rolled under her and the autopilot was managing the steering without too much of a fuss.

As usual, before coming on watch I donned my foul weather gear and boots and dug out a hat to keep my head warm. Chris had to laugh. Why was I getting suited up when all I had to do was relax in the saloon and keep an eye out for ships through the huge windows and an eye on the radar, AIS and autopilot? Yes, this was cruising in comfort. 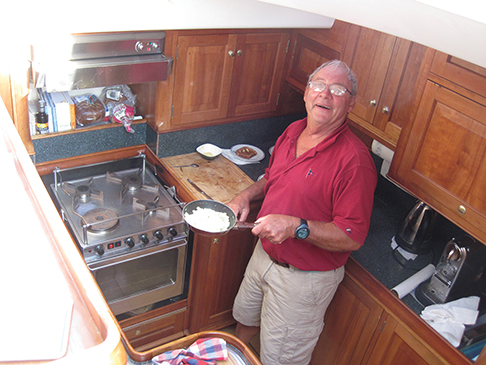 Time takes on a strange twist when you head off to sea because your day is broken into watch segments interspersed with navigation, naps, reading time, meals and more watch time. It takes me two days to adjust to the new diurnal pattern and then on the third day I find that I can go on this way forever.

The second day rolled by as we charged westward toward Hatteras. It was odd seeing the sun rise astern when it usually would be on the beam on this passage and then set ahead of us at day’s end.  But we were making an end run and glad of it. The wind was on the beam and not ahead of it and we were sailing around the back of the low instead of right at it.

We had a quick chat on the satphone with Commander’s on the second day and they confirmed that we were on the right track and that the cold front was moving through more quickly than expected so the wind would clock to the west just about when we got to the Gulf Stream. 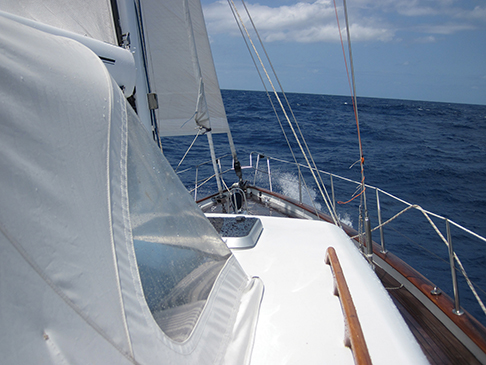 And so it did. Through the second night the wind died a bit and backed more to the northwest and the seas calmed down noticeably.  With the engine ticking over, we maintained eight knots through the water and expected to hit the Stream in the morning. And after the first night, Dean and I didn’t suit up for watches anymore and only threw on a jacket when we headed on deck to trim the sails.
As forecast, the next morning the wind behind the cold front brought clear skies and a northwest and then westerly angle. We were close to the Stream now so we altered course for Newport and trimmed for a beam reach. We were motorsailing at just over eight knots and kept an eye on the chartplotter’s speed-over-ground to see when we picked up the northeaseterly flow of the Stream.

By noon our eight plus knots had built to nine and then nine and half and then 10. We were riding the big conveyor belt of the Atlantic and making tracks for home. In fair weather the Gulf Stream is an amazing place. The water is the most transparent blue I’ve even seen, to the extent that you can virtually see right through the tops of waves. Sea life often is abundant and we saw shearwater and petrels and other pelagic birds. Several times toward the end of the first day in the Stream, pods of common dolphin paid social calls. And finally we caught a fish for our dinner.

We left the Stream after a good 24 hours of making miles and our course now was the final leg to Block Island and Newport. The weather had settled down nicely, the breeze was fair and aft of the beam and Waianiwa was in her element.

Early in the afternoon of our fourth day we rounded Block Island and then sailed up Narragansett Bay and into Newport Harbor. The trip had taken almost four and half days and we logged some 720 miles.  But our end run had allowed us to avoid the low that was still southeast of Nantucket and to sail with the wind over our shoulders for the whole trip. As all experienced sailors know, the shortest distance between two ports is not always a straight line. 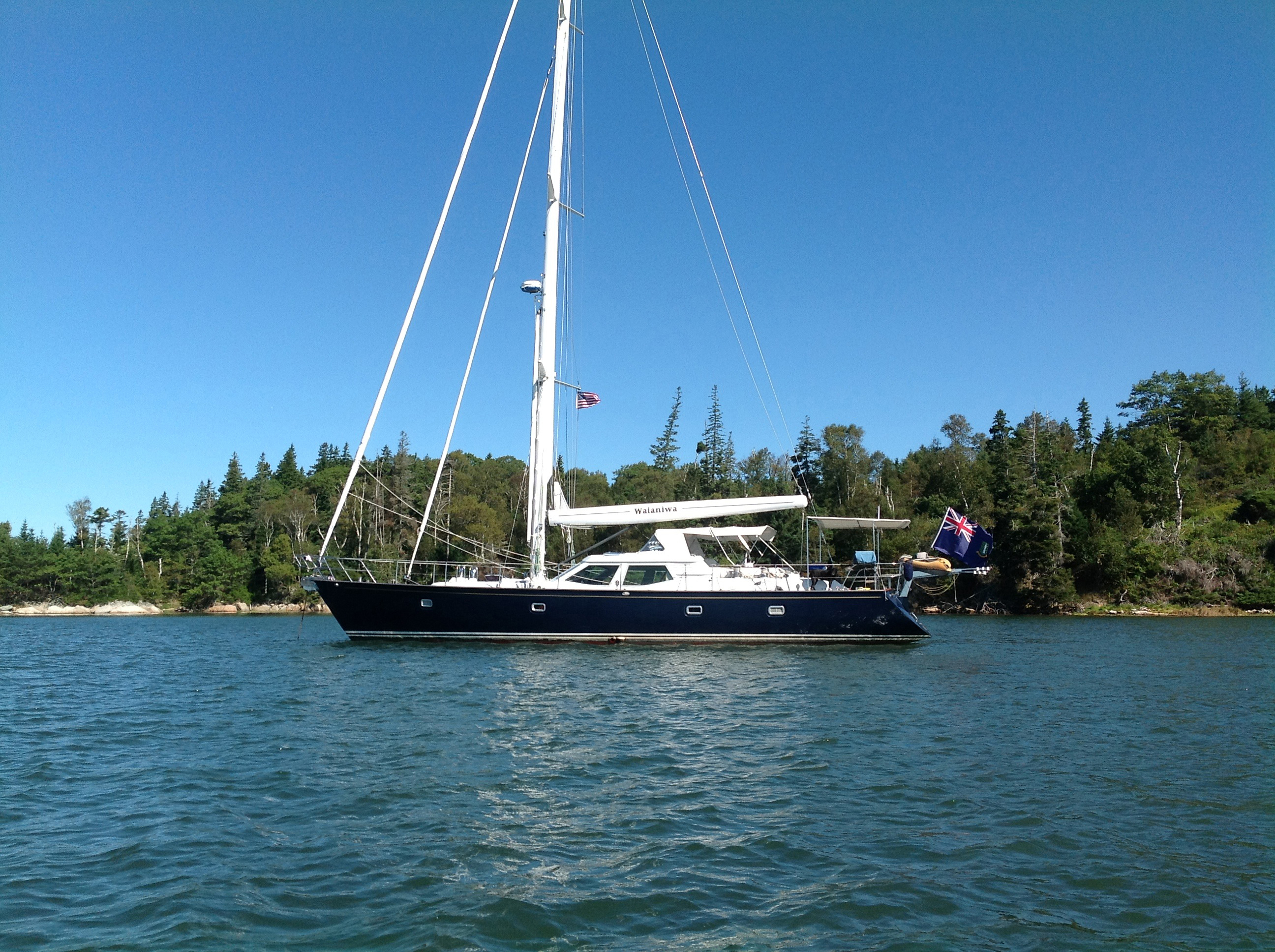 Unfortunately, the other skippers who had left Bermuda when we did and sailed north  on the rhumbline were still out there and would be for two or three more days bashing into strong northerlies. We were just glad it wasn’t us.