Cold weather sailing can be hard and dangerous. Or, it can be a rare pleasure.  (published December 2013)

Christmas Eve. We had just tied up alongside the remaining floating dock behind The Newport Harbor Hotel in Newport, RI. Most of the other docks in town had been put away for the winter. Our storm trysail was still set, frozen to the mast. The bright December sunshine seemed to contradict the bitter cold that afternoon, but someone would still need to go aloft to chip the sail’s slugs from the trysail track so we could stow the sail. En route from Florida, the last 24 hours had been dangerously cold with biting but moderate winds out of the north. Temperatures earlier that morning measured 16 degrees fahrenheit at Block Island. Days earlier, we had carefully calculated the risks and orchestrated the preemptive measures and now we were safely tied up, the cold a fading memory.

The experience of cold weather sailing, however, is frozen into my memory. That wasn’t the first time I have sailed in freezing conditions and it may not be the last. There are lessons to be learned if bitter winds are to be enjoyed—or at least endured. 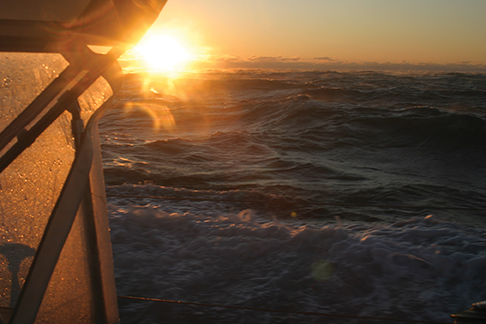 Sea temperatures change faster in shallower waters. In the spring, the water closer to shore gets warmer sooner than water farther offshore. In the fall, sea temperatures plummet in the last 60 miles of a coastal landfall as the shallower water becomes colder than the deeper mid-ocean water. Depending on the water’s salinity, saltwater freezes at around 27 degrees, as opposed to the 32 degrees required for fresh water. Prolonged immersion in either is deadly, of course, but the differences can be critical when considering how icing on deck occurs. It’s no surprise that icing in the Great Lakes takes place sooner than in the ocean. But, as the water gives up its warmth on early-season, exceptionally cold days, seeing the sea smoke and feeling the cold on one’s face can be a  truly beautiful experience.

The cold has unseen and often unrealized side effects. Cold air is denser than warm air so it exerts more force when it hits your sails. Loads increase for a given wind speed as temperatures decrease. Sails that didn’t blow out in 20 knots of wind during the summer may easily be pushed beyond their limits in extremely cold temperatures. Chafe seems to happen sooner in the Southern Ocean than it does in the tropics and hardware seems to reach its point of failure sooner. The lesson to be learned is to reef earlier than you would in warm weather. Not only will you preserve your sails and other gear, the early changes may help to avoid unnecessary—and potentially dangerous—repairs when temperatures alone can be life threatening.

Cold can go well beyond mere discomfort. It can kill, but the cold is to be respected rather than feared. It’s easy to understand that wet clothes make us uncomfortably colder sooner and sap our energy. Wet clothes can also lead to hypothermia sooner than dry clothes, leading to uncontrollable shivering, loss of coordination and poor judgment. While we can withstand periods of cold as humans, warmth is life, whether that is on deck, down below trying to sleep or in the water.

On deck, we need to be watchful of possible frostbite in areas of exposed skin; it doesn’t take long in high winds as I have seen when sailing deep in the Southern Ocean. Frostbite can develop closer to home too. While sleeping, we need to have warm, dry sleeping bags, suitable for cold climates. It’s usually a good idea to use the head prior to going to sleep; you have limited body warmth, and you don’t want to waste it keeping a full bladder warm.
Of course, hypothermia can easily set in if we’re thrown overboard into cold water. In 35 degree water, a person may only have 15 to 20 minutes before they’re no longer recoverable; depending on their age, body fat, clothing and other factors. I’ve heard it said that if a person falls overboard in 50 degree water and they are 50 yards from shore, they have a 50/50 chance of being able to swim to shore before hypothermia takes them down. Stay on board, warm and dry.

THE WARMTH
Clothing is an important part of that equation. Good foul weather gear, warm sea boots and socks that retain their insulating properties even when wet, layered clothing, a good hat—or better yet, a balaclava—all combine to help keep you warm. Here is a fact that few people consider: our clothes don’t keep us warm; we keep our clothes warm. Our clothes are meant to be insulators, protecting us and helping us retain the warmth that our bodies create.

In the early 1990’s Rich Wilson and I were enroute from San Francisco to Boston in an effort to set the speed record double-handed aboard the 53-foot trimaran, Great American II. As we approached Cape Horn, Rich was down below, wrapped in all kinds of dry, well-insulated clothing but was shaking uncontrollably; he was in the initial stages of hypothermia.
The same thing happened to me, when in 2001 we were enroute from New York to Melbourne, Australia in our attempt to set that speed record. A few hundred miles north of Antarctic pack ice in both cases, we administered the same cure—high fat food. Our low-fat diet from the tropics was not serving us well in the cold of the Southern Ocean. We needed to burn huge numbers of calories quickly just to stay warm and accomplish the tasks we had set for ourselves. Pasta al pesto, with massive amounts of olive oil and parmesan cheese, quickly stopped our shivering. Our bodies could then get on with the business of keeping us—and our clothes—warm.

There are a number of ways to keep warm when necessary and some of them may be available on your own boat. Drying lockers, “hot-bunking” to keep sleeping bags warm from one occupant to the next, and heaters, all play their own role. Keep in mind, however, that all heaters aren’t created equal. Catalytic heaters consume oxygen, even if they don’t appear to do so. Using them in closed and confined spaces can lead to asphyxiation. Many years ago a catalytic heater almost killed me. I was lucky to wake up with a severe headache and quickly opened the hatch while the rest of the off watch slept. It could have ended differently. 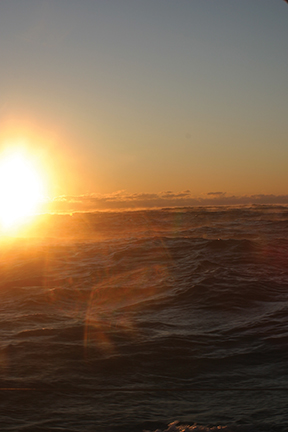 Winter presents weather problems that go beyond the normal summer sailing situations. The strength of an extra-tropical low pressure system is based on the temperature differential between warm and cold air masses. In other words, if the warm air mass is moderately warm and the cold air mass is moderately cold, the resulting low pressure system will have moderately strong winds associated with it.
If, on the other hand, the warm air mass is steaming hot and the cold air mass is biting cold straight from the Arctic, the resulting low pressure system will be something you don’t want to be around. Wind speeds will be excessive. As a general rule, temperature differentials are greater during the winter or “shoulder” seasons than they are during the summer.
Ice is deadly when sailing offshore. When the air temperature gets into the 20s, ice will begin to form on deck. Even when there is little spray, the ice can build up quickly and, over time, it will need to be removed. If mounds of ice develop, they are most likely to be on the bow which can put the boat dangerously bow down on her lines. Crew going forward to change sails or chip ice are more likely to slip, perhaps even going overboard; yet avoiding the effort and risk of going forward may result in dangerous inaction when action is needed most. In the cold, it is vital to take action early by changing to storm sails and removing ice rather than waiting too long and incurring additional risk in the process.

With the right preparations, cold weather sailing can be both challenging and exhilarating,  as we face nature on its most extreme terms and learn to coexist with it. The ocean is a remarkable place to spend time, and its many different faces make it a never-ending source of beauty and amazement. The wildness of cold weather passagemaking can be part of that beauty, but the ocean always needs to be respected and our own humanity and limitations understood.