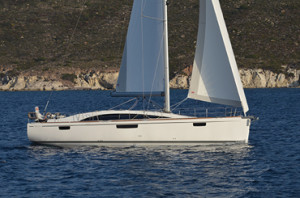 BAVARIA VISION 46 • Last summer, we spent a day in Annapolis, MD with the Bavaria USA team getting a first look at the brand new Bavaria Vision 46. Included in the party was Daniel Kohl from Germany, who is the chief of new sailboat development for Bavaria. Among other achievements, Daniel sailed Star boats for the German team in the Olympics. He definitely knows the pointy end from the square end.

As we expected, the Chesapeake was a millpond all morning, so we spent a few hours pulling the boat apart and delving into the process of how the new Farr design came about.

THE VISION
Two years ago, Bavaria was acquired from Bain Capital by a new investment group, which brought in a new set of managers to run things. With this sweep at the top, the company was poised to build on existing strengths and then move in new directions that they see as the future of yacht building. The Farr-designed Cruiser series that was introduced to North America last year was a theme created by the prior management team and tweaked and improved by the new team.

The Vision 46 is the first of the Bavarias to come from the new management team and from Daniel, who spent six months traveling to seven countries to meet with dealers and interview Bavaria owners, prospective buyers and cruisers. With reams of hard and soft data in hand, Daniel and his team sat down with the designers at Farr to come up with a hull and layout that satisfied the needs of the market.

The result was the Vision 46, which was created to make the most of elegant on-the-water living, provide true comfort at sea and at the mooring, and act as a modern push-button sailboat that will be easy for a singlehander or a couple to handle in all conditions. That was the vision.

PUSH-BUTTON SAILING
With the sea breeze still hours away, we took the opportunity to put the 46 through its paces under power. The boat is equipped with Bavaria’s Dock Control system, which allows joystick maneuvering in very tight quarters. The system employs retractable bow and stern thrusters and the main engine to maneuver the boat forward, backward, sideways and at any angle fore and aft.

The 46 was moored in a tight berth next to the Chart House with a boat ahead of us and only about 25 feet of channel to navigate out to the open water. We dropped the mooring lines and Daniel manipulated the joystick so the 46 crabbed directly sideways. Once clear of the boat ahead of us, he pushed the joystick forward and the boat motored ahead; all he needed was a couple of small tweaks to keep the boat straight and the topsides clear of the boats on both sides.

Once in the clear, Daniel handed over the joystick and, with about a minute of instruction, left me in control. Even if you didn’t grow up playing video games or toying with model cars or airplanes, the joystick is easy to use. I was able to get the boat to spin neatly in circles, crab sideways, and move at any angle I chose. In 10 minutes I had it nailed enough to be confident I could back the 46 down the narrow channel and into her slip in reverse.

I lined up the channel and then backed slowly, moving the bow and stern back and forth to keep us in mid-channel. I stopped the boat abreast of her slip and then held the joystick over and we crabbed sideways up against the dock. Nothing to it.

Another push-button option that Bavaria will make available is the new Trim Control system. Using Lewmar captive winches on the main and jib sheets and the auto-tack function on the autopilot, Trim Control allows you to trim, ease, tack and jibe by pushing buttons at the helm. The boat we sailed in Annapolis did not have the Trim Control option.

While Trim Control and Dock Control add a level of complexity that may be daunting to some, the technology is not particularly exotic and both systems can really enhance the whole sailing experience. The only physical hazard will be thumb calluses from button pushing.

LUXURY
In the many interviews that Daniel and his team conducted, the overwhelming majority of skippers and couples emphasized how heavily comfort and style weigh on their decision about which boat to buy.

Starting with the cockpit, the 46 has a fold-down transom that makes a good swim platform and dinghy landing. The aft back seat between the helms folds up to allow you to step down to the platform. With twin wheels, access aft is easy and the helmsman has great visibility from both sides.

The companionway has been offset slightly to starboard, which makes room for an L-shaped dinette to port and a bench seat to starboard. The outside dinette has a table that can be lowered and incorporated into the seats to make a large sunning bed where two adults can stretch out comfortably. 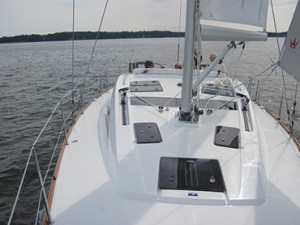 The low arch of the cabintop gives the 46 a contemporary look without making the boat look bulbous in any way. The angle of the cabintop as it runs into the cockpit provides a nice high back to the bench seats on both sides. These two nooks in the cockpit, well protected by the cabintop and a dodger, will be where you hang out while on watch or just reading at anchor. The design of the backrest all around the cockpit is ergonomically perfect for old backs like mine. 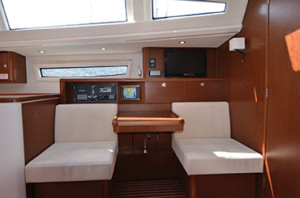 Down three steps in the saloon, you have the galley to port with the sinks on the boat’s centerline so they will drain on both tacks and the huge fridge and stove outboard. The aft cabin is accessed through the galley. There, you will find two large single berths with ample space between them for climbing in and out. This is a great guest cabin or will work well for two children.

The main head and shower stall are to starboard and the space is large enough to double as a wet locker while underway. Aft of the head, there is another cabin that can either be a huge starboard cockpit locker with adjustable partitions, or a third sleeping cabin with a single bunk.

The dinette is L-shaped and, like the cockpit arrangement, has a table that can be lowered to form a large double berth. To port is a bench settee that has a table in the middle section that can raised and lowered to suit your needs.

The master stateroom forward has a centerline double berth with storage under it and plenty of hanging space. The cabin can either have a small enclosed head or the space can be used to build a desk that can be used as an office or as a vanity.

The finish of the interior joinery is of a very high quality and the construction of drawers, doors, cabinets and bulkheads has a traditional quality about it that belies the ultra-modern look. 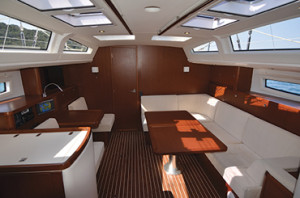 There are seven deck hatches, a large forward window and large side windows, so the boat’s interior is flooded with a huge amount of light and there is excellent ventilation. The boat we sailed had Oceanair screens and blinds on the hatches, and Venetian-style blinds on the forward and cabin-side windows.

The large square ports in the hull in each of the cabins gives a great view of the harbor outside when you are lying on your bunk or seated in the saloon.

The living spaces of the 46 have been laid out for the way we live—outdoors during the day and perhaps for the evening meal, and then down below for the evening and night. The boat will entertain a small crowd (say 20 people), can accommodate up to eight for meals, and happily sleeps four with room for two more in a pinch. 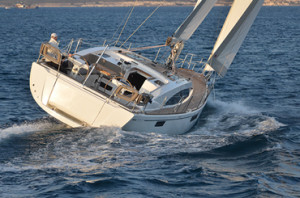 WIND AT LAST
We set off in mid-afternoon in search of the sea breeze. Off the U.S. Naval Academy we rolled out the big mainsail with its vertical battens and then the 110 percent genoa. The Elvstrom sails on the boat were as nice a set of roller sails as I have seen. No doubt an Olympic sailor is particular about the sails he specs for the boat.

All of the halyards, the mainsail control lines and the vang run through a deck-top conduit to a winch on the cabintop, and the two jib sheets run aft to the primary sheet winches on the coaming. The mainsheet does not have a traveler; instead, the sheet is double-ended and led through blocks on the cabintop, then along the boom to the mast, then aft on both sides to after winches next to both wheels. This arrangement allows you to use the mainsheet and the vang to shape the mainsail, whether by hauling it to windward in the light stuff or to leeward to depower the sail. Very simple.

The jib sheets inside the lower shrouds, so the sheeting angles are tight. This translates into excellent close-winded sailing. We tacked the 46 inside 80 degrees. 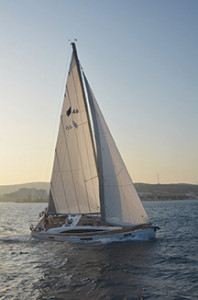 The wind stayed light until it was just about time to come in, but did in fact start to puff above 10 knots for a while. In the stronger breezes, the 46 showed what she is made of Upwind, she put her shoulder down and steadily accelerated. We suspect the new instruments had not been calibrated so the 21 knots on the speedo was probably a bit high. In fact, in 10 knots of wind and cracked off slightly, the 46 sailed easily at 6+ knots; off the wind she held 6 and probably hit 7 in the puffs.

The boat sails easily, is handy, and the sailing rig has been very well thought out. The new Vision 46 will make a handsome and comfortable family cruiser that can take you anywhere you might choose to go in luxury and style.