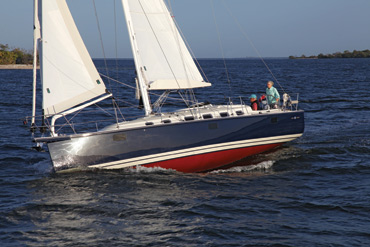 For the past 30 years, you could not sail into a harbor anywhere in North America, and most of the rest of the world, too, without seeing a cruising boat built by either Tartan or Island Packet. These two American brands, with Catalina and a few others, set the gold standard for American-designed and built cruising boats with more than 5000 cruising boats built between them.

So it is an interesting twist that the designers who made those brands so famous have joined together to create an entirely new line of performance cruising boats under the new Blue Jacket banner. Bob Johnson, founder and chief designer at Island Packet, and Tim Jackett, designer and former CEO of Tartan-C&C, started with a blank sheet of paper and set out to build a true performance cruiser that will sail extremely well and will be an elegant cruising yacht for discerning owners who demand both high quality and a distinct pedigree. Built by the craftsmen at Island Packet, the new Blue Jacket 40 looks like the start of a new American tradition.

BWS was lucky enough to be invited for sail trials of hull number two in early April, a week after the boat was launched. Hull number one went to the Great Lakes where it was to be launched later in the spring. We found the boat in a slip in the marina at Snead Island Boatworks in Palmetto, Flordia, and saw at once that the new design was neither a Tartan or an Island Packet.

With a plumb bow, a squared off stern with a small swim platform, a flatish sheer and moderate topsides, the hull looks trim and built for speed. The fractional, Solent rig (a blade jib on a Hoyt JibBoom and roller furling reacher) and a fully battened mainsail has plenty of power built into it and is set up to be handled completely from the cockpit.

Under the water, the 40 is fitted with a fin keel with a ballast bulb and a large spade rudder. The design has a minimum of wetted surface and a fairly narrow beam so it looks to be very slippery and, with a nicely balanced water plane as the hull heels, she should drive well through puffs and accelerate instead of rounding up.

The 40 has a large comfortable cockpit with twin wheels and a central pod where you can mount a chartplotter and a folding table. Most of the sheets and control lines are handled at the single winches that are positioned within easy reach of a person at the two helms. The jib has a single sheet while the mainsheet is double-ended and can be trimmed from both sides of the boat. The 40 is set up to be easily singledhanded or run by a couple.

There were eight of us aboard for the sail that afternoon and once the sea breeze began to fill in we motored away from the marina and out into the Manatee River, which is known for its sandbanks and narrow channels. 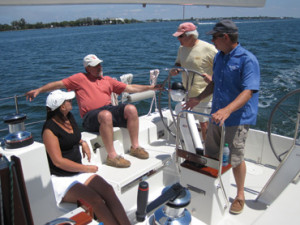 Under power and using the bow thruster, the boat handled well in the tight quarters of the marina, spinning in its own length. The boat has only a 40 horsepower diesel and is equipped with a three-bladed, folding Gori propeller. At maximum rpms, the boat achieved 8.4 knots while at cruising revs of 2,400 rpms she jogged along nicely at 7 knots while burning about half a gallon of diesel an hour. In reverse we felt very little prop walk and the boat steered easily and straight.

Out in the river, we hoisted the big mainsail with the electric winch on the cabin top and rolled out the self-tacking jib. With the engine off and about 8 knots of breeze on the nose, we sailed down the river making four knots through the water. The boat is indeed beautifully balanced and sailed at 42 degrees off the true wind angle. With the jib on the fixed boom and sheeted through a car on a track forward of the mast, you can crank the headsail in very tightly, but you have to be careful not to close the slot too much which can kill your power and boat speed.

We tacked effortlessly from sandbar to sandbar until we were at last clear of the river and out into the relatively deep water of Tampa Bay where we rolled up the jib and deployed the big reacher. With the wind building a bit and the big sail drawing, the 40 leaped forward and you could feel the power in the rig and the lift in the keel and rudder.

We sailed into the middle of the bay before turning around and heading back to the river and the marina, now running almost dead downwind wing-and-wing. Even with the apparent wind down to four knots, the 40 slipped along very nicely and steered positively.

With eight of us aboard, the cockpit never felt crowded and we were able to manage sheets and control lines without bumping into each other. The helms are newly designed Edson pedestals that take up very little space and are both functional and attractive. For those who want to splash out a bit, the new Edson carbon fiber wheels would add some very modern styling.

The boat that Jackett and Johnson have created is a fine sailing boat that has legs for fast sailing yet is easy to handle, versatile and has no vices under sail or power. The 40 is simply a pleasure to sail.

Hull number two was built with the standard three-cabin plan that provides a large V-berth in the master cabin forward and two quarter cabins with large double berths. With the three cabin layout you can cruise with up to six adults aboard. The two cabin version keeps the port quarter cabin, but converts the space used by the starboard cabin into a huge storage locker with access from the cockpit and below decks. For living aboard and extended cruising, the two cabin version may well be the better option. 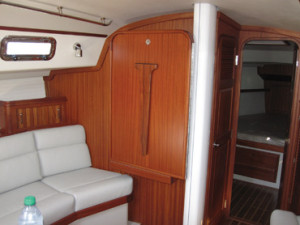 The forward cabin has plenty of locker space between two small bureaus, two large drawers beneath the berth and a large hanging locker. The bow thruster is built in under the bunk.

The 40 has one head with two doors, one from the forward cabin and one from the saloon. The head is large and had a folding door that creates a shower stall.

The main living area has curved bench settees on both sides with storage behind them and tanks beneath. To keep the space open and uncluttered, the saloon table folds away again the main bulkhead. The cabinet behind the folded table is a locker for bottles and glasses.

The galley dominates the 40’s interior and will please even a gourmet chef. The galley in turn was built around the two-drawer, stainless steel refrigerator and freezer. These modern appliances are large enough for truly extended cruising. The galley has ample storage space for all of your cooking tools plus dry stores, spices and cabinets for dinnerware. You spend a lot of time in the galley so it is only right to make it large, attractive and useful.

The chart table and electrical panels are to port and well set up for mounting instruments, radios and sailing repeaters.

For a couple who usually cruise either alone or with another couple, the Blue Jacket 40 offers an elegant and comfortable interior that is both bright and warm while evoking the traditional wood qualities of classic American-built yachts.

In the midst of the Great Recession, it was a bold move for Bob Johnson and Tim Jacket to launch a new yacht brand. Yet, their gamble appears to have paid off with the launch of the Blue Jacket 40.

The design is thoroughly modern and innovative. The construction, with a cored hull and vacuum bagged vinylester laminates, is robust but light and stiff. The accommodation plan is a pleasant mix of traditional styling blended with the latest systems. And, the rig is both easy to use and very powerful.

BWS had a very pleasant sail aboard hull number two and we predict that as Americans get to know this new design and this new brand that they will discover what we did: in the face of adversity, American ingenuity is alive and well and reaching across Tampa Bay at a happy eight knots.