Over the last few years we have cruised our 45-foot sloop from New England to the Bahamas and the Caribbean for the winters. That meant we were in the water for more than a full year, 18 months in fact, between haul outs. Finding bottom paint that will last that long and will still behave as it should in a wide variety of conditions and temperatures has proven a challenge.

This is not news to any long distance cruisers. We all have the same issues that are also complicated by the regulatory trend to reduce the amount of copper (cuprous oxide) and other toxins that we emit into the water.

TRENDS
In the past few years, the EPA and state governments have been looking more closely at the impact copper paints have on the environment. Tributyl tin based paints were banned in 1988 and copper is now in the regulators’ sights. Washington state and California have already enacted legislation to reduce and eventually ban copper based paints. Without question, this is the beginning of a national trend that will affect all recreational boat owners.

In this transition period, the large paint companies have been working on formulations that do not contain copper. While there have been some interesting experiments, the consensus data now indicates that a biocide called ECONEA mixed with a small amount of zinc (2% or so) is the most likely winner.

There have been independent tests of the new ECONEA formulations and the results are somewhat mixed when compared to tin and copper based paints. One of the problems with the new paints is that they do not do a great job warding off slime, which then acts as a host for other underwater marine life.

The most recent crop of copper free antifouling paints have been improved with the addition of “slimacides.” Two popular additives are Irgarol and Biolux. If you are looking at a copper-free paint, make sure you use one that has had its performance boosted with one of these additives.

The ECONEA paints rely on zinc to work properly yet zinc is another toxin that is being studied and evaluated by the EPA. Should zinc fall under a governmental ban, then the new copper free formulations will have to be reconceived from the ground up.

Traditionally, antifouling paints have been mixed with a solvent of some type to make them easy to apply and spread evenly. Petroleum based solvents are also under review as candidates for regulation and even a ban. So, we are seeing more water-based paints coming onto the anti-fouling market. At the least, these new paints are much nicer to work with than solvent based paints since there is no foul aroma that can make you dizzy during application and your brushes and rollers can be cleaned up with fresh water.

Change is definitely coming in the world of antifouing paints so we need to pay attention to developments as they come. The claims being made for the new copper free formulations are very positive, yet the actual long haul performance of these paints remains an open question amongst the cruising fleet.

COPPER WHILE YOU CAN 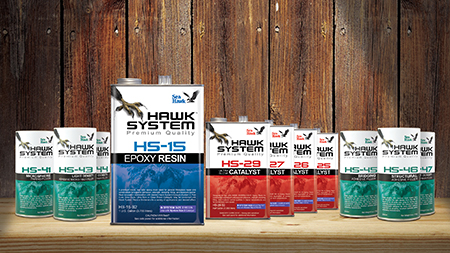 While it is important to follow our state and federal regulations regarding bottom paint, most of the country still sanctions the use of copper based paints. And, for the most part, copper paints still work better and last longer than the new copper-free paints. If you know you will not be hauling out for a year or more, then it is practical to use a paint that has the best likelihood of working for the duration.

As a rule of thumb, the more copper you apply to your boat’s bottom, the longer the antifouling properties will last and the better it will work. All bottom paints list their ingredients on their labels and you will see that there is a wide divergence in the amount of copper in the paint as a percentage of total volume from a low of 25 percent to a high of over 60 percent. It should be no surprise that the paints with the highest copper content work the best and are the most expensive. In this category, Petit Trinidad SR at 60 percent copper, Interlux Micron 66 with 40 percent copper and Biolux and Sea Hawk’s Island 77 with 42 percent copper and a biocide, are often spoken of as among the leaders.

But, you don’t have to go with a conventional solution to the copper bottom paint problem. Developed in the U.K., Coppercoat is an epoxy based antifouling that has the highest copper content of all antifouling coatings—4.2 pounds of copper in every liter of paint. Coppercoat has to be applied on a bare hull and dries to a hard epoxy finish. The copper remains suspended in the coating and leaches very slowly but steadily to the surface. It is common for boats to go 10 years before they have to haul out and touch up or recoat the bottom. Coppercoat is more expensive than even the priciest antifouling paints but if you amortize the cost over 10 years, the overall savings is significant.

TYPES OF PAINT
There are five types of antifouling paints in common use, with two of them being the most popular—copolymer ablatives and modified epoxies.

Copolymer ablative paints release their biocides at a slow and steady rate, and wear down or ablate until the coating is all gone. This system provides a fresh and effective antifouling surface that is also smooth and fast. And, a light scrubbing will refresh the surface if it becomes slimy. Fast offshore passages also tend to polish the bottom so it will be cleaner when you get to your next landfall than when you left. Because the paint wears away, long haul cruisers often apply two coats of one color on top of two coats of another—say, red over blue. That way, when you see blue appearing on the leading edge of the keel and rudder you will know you have about six months left before you have to haul and repaint. Since most of the paint is gone when you do haul out, you do not build up layer upon layer of old paint on your boat’s bottom.

Modified epoxy paints are hard surfaces that leach their biocides steadily but do not wear away over time. Because the coating remains in tact as the biocides leach through it, the application can contain more copper and other biocides than ablative paints. For example, Petit Trindad SR can carry 60 percent copper. For boats that are in the water for a long time, modified epoxies often work well. But the down side is that when it comes time to haul out and repaint, you have the full coating to sand down before you apply a new coat. Otherwise, the bottom will become chipped and unfair from old paint layers.

Thin film paints are popular among the racing fleets and in fresh water because they dry to a very hard, slippery surface and because they work best in water where algae is a problem instead of barnacles and other sea faring creatures.

Composite Copper Technology paints were developed to reduce the copper content of the coating while maintaining a reasonable amount of antifouling. Silica is used to augment the copper and slimacides help reduce slime.

White copper paints use a different copper formulation that is great for very bright colors and can be applied to aluminum under the water. White copper uses copper thiocyante instead of cuprous oxide. For racing boats that want to make a color statement, paints like Petit Vivid are fun and effective. And, for those with sail drives on their engines, white copper is the best way to prevent the natural electrolysis that occurs when cuprous oxide paints interact with aluminum. 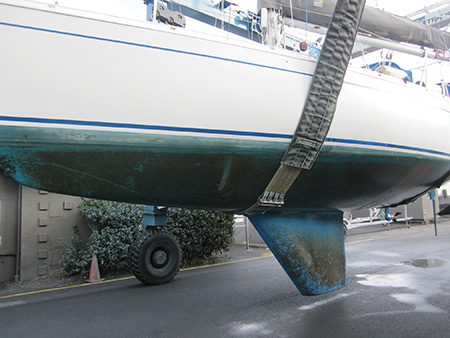 The battle to beat the barnacles has been going on since we first took to the sea and will no doubt continue for as long as we sail. We have come a long way in the development of biocides that work pretty well but none are perfect. Even Coppercoat needs to be renewed from time to time.

For the long haul, the higher the toxicity of the paint you apply and the more coatings, the better it will perform. Yet, even in this best-case scenario, you will find that you need time in the water every month or so to scrub away the peskiest critters and slipperiest slimes. That’s just the way it is out there in the big oceans.