We’ve all seen images of Sydney’s stunning harbor, with its iconic opera house and coathanger bridge. But just 20 miles north is an equally special place called Broken Bay. We spent two happy weeks pottering around that aquatic playground and quickly grew to appreciate its charms.

The best known arm of Broken Bay is Pittwater, where moorings fill every inch of coveted shoreline and several charter companies base their fleets. The bay explodes with sailboats during weekends and for weekday evening races, in which participants fly everything from custom-sewn Kevlar to old scraps of canvas. Some days, we watched the races from the shade of our cockpit while kicking around at anchor. At other times, we mimicked them with our own maneuvers, tacking up, then gliding back down the bay. 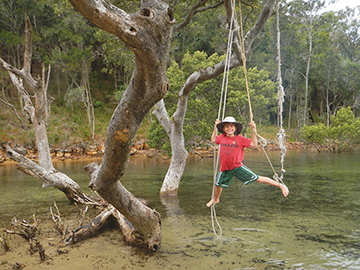 In spite of the startling number of boats, we always found a spot to anchor. Morning Bay provides shelter from the west, with enough space to anchor in mud at depths of thirty feet. When the wind went around to the southeast, we’d move to the edge of Careel Bay, where we could practically walk ashore through the tightly packed mooring field. Of course, it was a long dinghy ride to the head of the bay, then a healthy walk to the nearest supermarket in Avalon, but that’s what vacations are for. We had all the time in the world; enough for day hikes like the one up Barrenjoey Head with its namesake lighthouse and Tasman Sea views.

Pittwater is just one of several arms that branch off Broken Bay and cut a lightning bolt pattern into the surrounding countryside. Of them, Cowan Creek offers incredible peace and quiet right in Sydney’s backyard, all of it protected as Ku-ring-gai Chase National Park. It’s an uninterrupted carpet of green where leafy paperbark trees are populated with cicadias that fill the valley with their song, as well as cheery kookaburras and beautiful white cockatoos. The latter, though, are better seen than heard, given their ear-splitting caw-caws.

Dozens of free public moorings line every deep-water branch of Cowan Creek. These fill quickly on weekends, but at mid-week we had no problem snagging one, then another, and another, working our way through the area in short hops. Just when we thought the steep hillsides ahead would pinch to a close, a sharp turn revealed yet another twist in the maze. 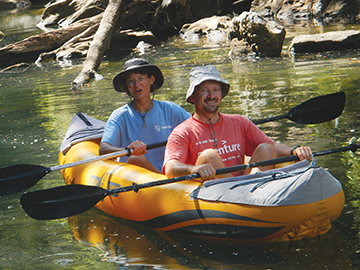 The only drawback was not being able to take more than a very quick dip in the water, and that, with a very sharp look-out. The threat of sharks seemed secondary to the blooms of jellyfish that floated past with the eerie silence of an alien invasion. On the other hand, we delighted in kayaking, poking around orange-brown rock ledges and imagining life as it might have been in the dreamtime days of Australia’s first people. Those memories warm us even as we look back on them from half a world away. So to all the sailors who dream of sailing Down Under, don’t forget Sydney’s second harbor, where the waterways can be as bustling as they are serene.

View all posts by Nadine Slavinski