Boats have changed and the process of building them has even more so. Beneteau, the world’s largest production boat builder, shares some secrets to developing lighter boats with greater fuel efficiency, increased longevity and enhanced cost-effectiveness  (published February 2017)

Groupe Beneteau builds nearly 8,500 boats annually spread over more than seven brands. The work is done in 16 production and assembly facilities in four countries, including the U.S. Approximately 45-percent are sailboats and 55-percent are powerboats. About 30-percent of these are sold into the U.S. where Beneteau commands nearly 65-percent of the sailboat market.

With this kind of volume, the French builder knows a thing or two about emerging technologies, cutting edge materials, efficient process flow and the changing demands of boaters. So how are boats built today and who benefits most from the changes that were introduced over the past 30 years? 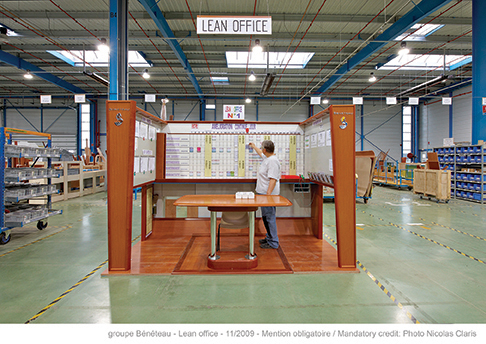 I visited several Beneteau facilities in and around St-Gilles-Croix-de-Vie on the western coast of France but I hardly scratched the surface of all that the company does. Although most of the business revolves around boats, Beneteau also dabbles in manufactured homes, which is a great way to leverage their extensive knowledge of fiberglass construction.

Beneteau is family owned with a woman at the helm. Madame Roux is a direct Beneteau family descendent who goes by her married name. The company has eight highly automated building facilities in France alone, some of which are also geared toward experimentation with new materials, processes and designs.

The 130-year old organization uses a mix of three types of building processes including traditional hand layup, resin infusion (a dry layup that is vacuum bagged and infused with resin) and injection molding (two molds are sandwiched around materials that are laid in including gel coat, fiber, resin and coring, to create a perfect finish on both sides). The process of choice depends on the boat part being manufactured as the builder seeks to optimize the relationship between strength, weight and thermal insulation as well as providing a process that reduces labor and parts variability. 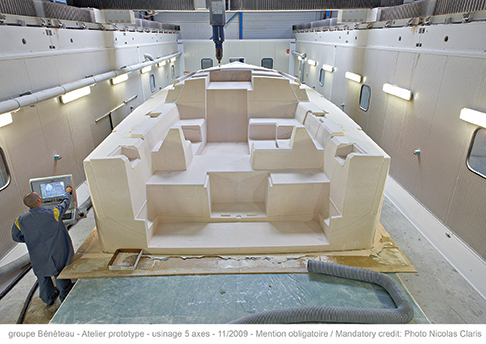 “Weight-savings is key for better sailing performance and improved fuel economy,” says Laurent Fabre, President of Beneteau Americas. “We build lighter boats that require smaller engines and have better fuel economy. We like to say we carry people, while they (the competitors) carry fuel.”

Some of the weight-to-strength ratio comes from advances in the materials themselves. Today’s vinylester resins are stronger and more flexible so less resin is used. Adhesives have also evolved and are much stronger; in some cases, they can take the place of heavier mechanical fasteners, again reducing weight. And knitted fibers have replaced woven fabric creating stronger structures that will last longer with less cracking and print-through (a condition where the pattern of the fabric becomes visible under the gel coat as boats age).

These days, Beneteau leans heavily on manufacturing technologies from CAD (computer aided design) to CNC (computer numerical control) cutting routers. Both of these technologies were available 30 years ago in other industries but increasingly, they are being implemented in boatbuilding. Beneteau’s dedicated prototyping facility includes robots that carve life-sized 3D models of new designs out of foam. It’s a better way to get a feel for a boat’s dimensions than just inspecting a drawing.

In some facilities, CNC deck-cutting robots carve holes for hatches, fixtures and attachments. A specific model’s deck is cut in a sealed room so the process is contained (cleaner) and faster. It is also more precise, relying less on human handling. Consistency improves and tighter tolerances can be achieved because robots rarely miss. 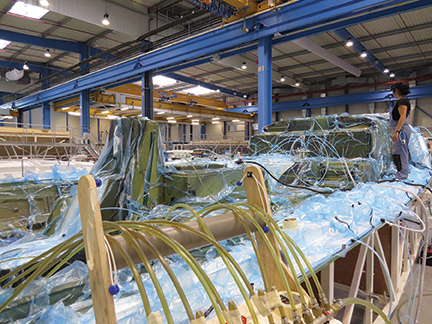 Another computerized cutter is used for the various kinds of fiberglass cloth that is laid into the hulls, decks, liners and component structures. The strips of cloth are cut with precision, numbered, labeled and packed into a kit bound for the workstation of a specific vessel. Computerized cutting reduces labor and product variability. The pieces even have an arrow on them to show the orientation of the cloth to the bow so it’s a foolproof process. 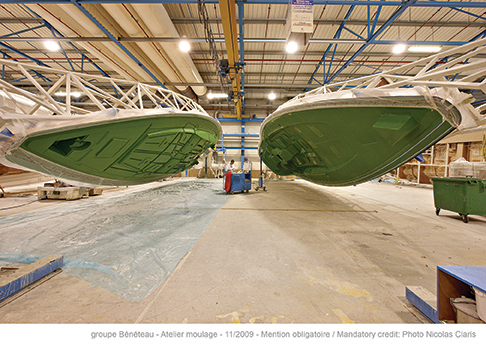 Boats are grouped and assigned to a plant according to size, not type (power or sail) because larger boats take more time to build due to increased complexity and attention to detail so the goal is to have similarly-sized boats move along the line at the same rate. Hulls are lined up on the beam and move down an assembly line to a new workstation every one-to-three days.

Each facility is divided into three areas: molding, cutting/trimming, and assembly. “Not only does this keep the facilities cleaner, it moves a boat through its various production stages at an optimal rate,” adds Fabre.

Standard workflow, like plumbing, electrical and furniture installation, is an often repeated process that minimizes errors even as different workers become involved on different days. Boats are built from the hull up so everything, including the engines, systems, bulkheads and furniture, is installed before the deck goes on like a lid. In each plant, the tooling is mobile so workstations can be dis-assembled, moved or changed up on the fly and that keeps things flexible in the event that sales orders change.

Components are binned per vessel so a specific model receives multiple crates of wood parts, fixtures, hose and wire delivered directly to the workstation. Work times are closely monitored and documented for continual process improvement. Quality control occurs at every step, including testing of the thru-hulls and engines in a pool before the boat is prepared for shipment.

“We’ve studied best practices in other industries, like automotive, and we focus on elements of Lean manufacturing, just-in-time supply chain management and continual process improvement,” says Fabre. “It’s no small endeavor when we have so many models and so many workers.” 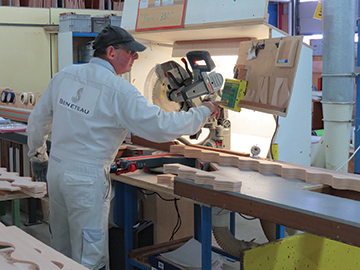 Beneteau’s crown jewel is their classic woodworking facility that supplies the interiors (the most expensive part of the build) for all their vessels worldwide. Some workers have come to work here because their fathers or grandfathers worked at Beneteau and craftsmanship is a point of pride.

The highly skilled labor force works with both traditional wood and engineered Alpi wood that won’t warp, creates lighter cabinetry and bulkheads, and is pressed from wood pulp made from sustainable sources. Some wooden parts are hand-milled while others are built with computer-assisted cutting and varnishing machines. Complex curved trim pieces are often made of pressed layers of wood that are cured in 20 minutes using molds with high-frequency sound waves. The attention to weight is key. For example, the Oceanis 41, which morphed into the 41.1, lost 2,500 pounds in the revamp. Much of that was in the redesign of the transom but some of the weight also came out of the interior with a more efficient layout and slightly altered furniture.

Before any vendors are approved, a dedicated laboratory thoroughly tests every piece of equipment (generators, electronics, appliances, etc.) and material (resin, glass, metals, etc.). This is not only for quality control, it’s also a nice test bed for new accessories such as fuel-sipping engines and digital switching technology that is replacing old-school electrical panels on most powerboats and some high-end sailboats.

In addition, the company is experimenting with different vacuum bagging technologies, focusing on reusable flexible silicone mats rather than plastic bags to save money and lessen the environmental impact. The addition of sound-dampening wall coverings on powerboats models has driven the need for believable faux-leather materials that are also more environmentally friendly than the real thing.

On the design side, Beneteau is even testing a wing sail that may save weight, reduce complexity and possibly re-define cruising under sail. Because many Beneteau sailboats go into charter with Moorings and Sunsail, I have trouble visualizing a first-time charterer using a wing sail, but Fabre insists that if done right, it could make sailing simpler. I can’t wait to see.

With 6,000 employees, you may find it hard to believe that Beneteau is a family-focused company. However, that is indeed the case, and many working families have been represented at the firm over multiple generations. Not just paying lip service, Beneteau makes sure workers are happy because a happy labor force is productive rather than disruptive.

For example, workers who build smaller models (typically 40 feet and under) are cross-trained so that on one day, they do electrical work while on another, they focus on plumbing. This keeps employees engaged with a variety of work, more motivated because they add to their skill set, and flexible so that the assembly line doesn’t stop if someone calls in sick.

Additionally, plant work forces are kept to between 200 and 250 people. “We like to keep things ‘human sized’ with flat layers of management and good communication,” adds Fabre. “We’ve found that’s the magic number so that people don’t lose sight of what they’re trying to achieve and what the customer really wants.” 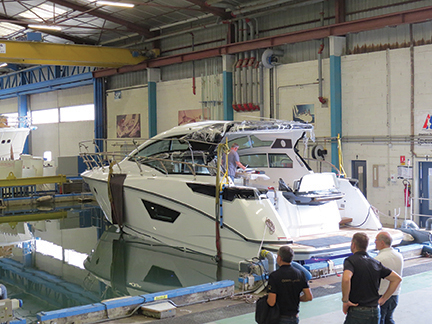 Beneteau makes boatbuilding look easy, or as easy as producing today’s complex and sophisticated vessels can be. The company has benefited from improved production processes, new technologies and better materials so it’s actually possible to produce thousands of boats a year. But with higher quality boats, increased longevity, improved fuel-efficiency, shorter order lead times and increased value, who really benefits? Why you do, bien sur!