A guide to equipping your boat with an electronic autopilot or windvane: Part II  (published November 2013)

A common piece of equipment found on the modern offshore cruising sailboats is the autopilot. Whether it is an electronic unit, a windvane, or both, the need to relieve the helmsman from steering duty is essential to making safe passages, especially when sailing short of singlehanded.

Continuing our series on choosing and understanding the various self-steering options on the market, the windvane also falls under the category of options that should be considered when making your boat energy efficient offshore.

As stated similarly in Part I (see the October 2013 issue of BWS) the major choices when faced with the purchase of new self-steering gear are: What conditions the unit is expected to perform in; what are the possible failure modes; what are the challenges when mounting the components to the boat; and last but not least, how much should ongoing maintenance and the expected service life of the gear be considered? 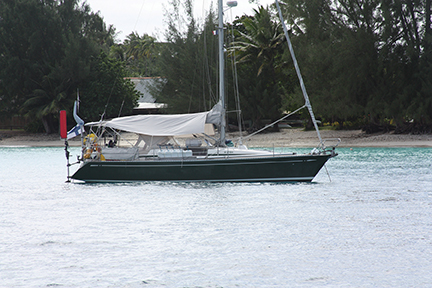 There are three major types of wind- vanes used today, with a few rare types in use for specific cases (e.g. when a boat’s rudder configuration doesn’t allow the installation of one of the major types). These major categories are trim tab, servo-pendulum and auxiliary rudder. All of them use a steerable vane that is oriented to align with the desired apparent wind angle. The deviation of this vane by the wind when the boat goes off course activates a series of mechanical gearing or levers to achieve the desired course correction.

Trim Tab Steering
A trim tab windvane, less commonly seen by major manufacturers today, was the forerunner of the modern windvane system and works by affixing a small “trim tab” to the main rudder.  This trim tab is easily moved due to a small surface area, and the windvane’s power is sufficient enough to kick it to one side or the other. As the trim tab swings, it creates a significant water force, causing the ship’s main rudder to move opposite, and this motion of the main rudder is able to steer the vessel. Though this sounds complicated, it works rather well and was a predominant form of steering for many offshore boats until the servo-pendulum was developed.  It had a major drawback, though, in that it could not be fitted to a boat where the trailing edge of the rudder was difficult to access, as in the case of counter sterns. 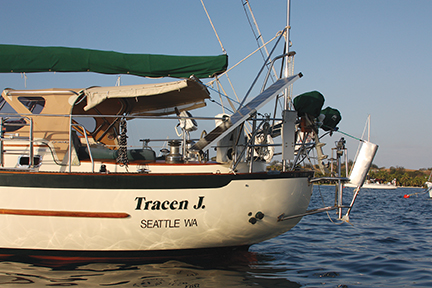 Invented in 1961 by Blondie Hasler—a major proponent of the modern Chinese junk rig and one of the leading originators of the OSTAR race—the servo-pendulum vane gear was a significant advancement in self-steering for one major reason: it required no modification to an existing boat’s rudder and thus allowed yachts with counter sterns or fully submerged rudders to be self-steered. Today, the majority of commercially available windvane self-steering gear systems are servo-pendulum systems that have been, on the whole, quite reliable for yachts around the world.

The servo-pendulum system is the “classic” windvane, with a small servo blade that looks like the windvane’s rudder in the water, and a larger windvane “paddle” in the air.  As the vane tips to one side or the other, the servo blade turns in the water like a mini rudder, but this doesn’t generate sufficient force to steer the boat by itself. Instead, as the rudder turns, the water flowing past it swings it to one side or the other.

For a similar analogy, think of when you stick your hand outside a car window while moving. If you turn your hand sideways and “fly” it like an airplane wing, as you change the angle of your hand the air pushes it up or down. This servo rudder does that same thing in the water, and the force of the water pushing it to one side or the other is surprisingly powerful. This force is then used to turn the main rudder through lines that are affixed to the tiller or wheel of the boat.

The servo-pendulum is rather complicated as it has many moving parts and the constantly moving lines can chafe over long passages. In addition, the variety of moving joints and frequent oscillation cause certain models to have a reputation for breaking down mid-passage; to the immense frustration of their skippers. Thus, it is important to understand the issues facing the specific brand and series of the servo-pendulum you may wish to purchase, as well as to gather a general feel for its reputation in the offshore community as the quality of these devices varies greatly, even from the same manufacturer, as improvements were made from year to year or model to model.

To reduce the complexity of the installation, the auxiliary rudder windvane was invented.

Auxiliary Rudder Vane
The auxiliary rudder windvane works on an entirely different principle than the other two types. Instead of the windvane, with its low power, moving a small rudder tab or servo blade to increase power before steering the boat, the auxiliary rudder windvane uses a very powerful vane to directly steer a balanced rudder. There is no connection to the boat’s rudder and typically the boat’s rudder is left centered or angled very slightly to balance the helm. Auxiliary rudder windvanes put a tremendous amount of force on the vane, rudder and boat mounting points, as they are directly steering the boat. This makes it more essential to buy an extremely well made model, as there is very little tolerance for poorly designed gear under these stresses. A well-made system, however, is exceptionally reliable offshore because it only has a few moving parts and no critical lines that can chafe through. A good auxiliary rudder system has the added advantage of being able to serve, in many cases, as a “spare” or “emergency” rudder should something happen to the main rudder or steering system. This feature has helped several sailors return safely to port after catastrophic steering failure offshore.

MAJOR CONSIDERATIONS
While windvanes do not require any electricity to operate, and thus tend to be preferred by the offshore sailing crowd, they require a lot of care in mounting, installation, and use. Windvanes are only useful, of course, when the wind is blowing from a consistent direction and with a reasonable amount of force to power the vane. For most systems, five knots is sufficient, but as the wind becomes variable or gusty, the change in apparent wind angle is enough to cause the vane to behave erratically until the wind stabilizes somewhat. As a result, they tend to be most useful in longer passages, particularly in clear air.

Additionally, the mounting of a wind vane system must be extremely strong and rigid, particularly for auxiliary rudder vanes, which exert full rudder forces on their mounting points.  Because of this, the mounting system for most vanes spreads the load across many parts of the transom and can obstruct or prevent the installation of other equipment such as arches, davits, outboard motor mounts or swim platforms. Consult with the manufacturer to get diagrams of the necessary space required and mounting options before committing to a given design.

Also, if you are considering a trim-tab or servo-pendulum system, note that additional modifications to your boat may be required to provide strong and solid fairleads for the control lines, to attach those lines to your wheel or tiller, and in the special case of a trim-tab, to affix the tab to the ship’s rudder. These considerations can be a significant part of the installation effort and expense, so plan your install carefully as these details are often the weak points that bring grief to otherwise solid and reliable vane gear.

Lastly, consider the air you are putting the vane portion of the self-steering into: Is it obstructed by arches, solar panels, dodgers or turbulent air off the mainsail?  In many cases, some of this is unavoidable, so consult with the manufacturer to determine if the obstruction is significant enough to cause an issue with the vane getting clear air to properly steer by. Many vanes stick up far enough to get above deck and cockpit objects, so make sure there is nothing above the vane such as dinghy davits or mizzen sails to obstruct the full range of the vane’s motion.

COMMON FAILURE MODES
The windvane is, in general, an exceptionally reliable piece of gear if it is suitable for your boat, and maintained and manufactured properly. However, failures do occur, most notably on trim-tab and servo pendulum systems. Excessive chafe on control lines, control line fairlead breakdown, and screw or retaining pin failure on part of the gear mechanism are the common offshore issues. Fortunately, replacing the lines is not difficult, and spares are easy to carry and refit. If a key vane component goes into the water though, replacing it at sea, even if a spare is carried, can often be impossible in all but the calmest conditions. Therefore, maintaining vane gear and keeping a lanyard or tether on the most critical components is essential. 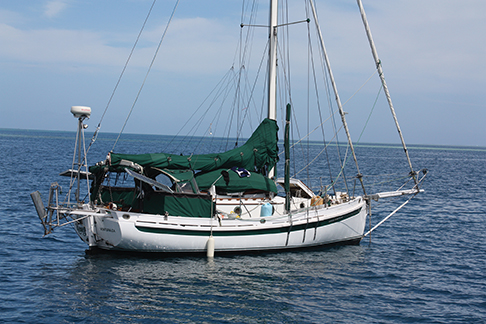 Because of the nature of operation, differences in failure modes and specific boat layouts, one size definitely does not fit all in the self-steering world. What makes complete sense to a coastal sailor who frequently motorsails would not suit a round-the-world sailor on a boat with minimal electronics.

For instance, with offshore sailors the first and foremost consideration is usually that the unit be able to function at all times in nearly all but the most extreme survival weather and require the least amount of crew interaction necessary. This necessitates that the unit be able to operate independently of electrical systems or engine function, and thus often swings the offshore sailor’s preference in favor of a windvane.

However, if the sailor has a very well equipped yacht, with redundant and ample power supplies, or if he or she expects to motor as much or more than sail, during which electricity is provided by the engine’s operation, an electronic autopilot may make more sense.

For many sailors with the budget, having both a windvane and an electronic autopilot may be a good solution, keeping in mind the situations in which either will be needed. But armed with the awareness of how and where each of the major self-steering types are most useful and in what ways they are often unsuitable, a wise skipper can make the most sensible decision for his vessel and sailing intentions.