I’m no Magellan, Cook or Ericson. No Chichester, MacArthur or Knox-Johnston. Hardly. I’m a 60-year-old music producer/ad man with a voyage monkey on my back. I’ve read Slocum, Moitessier and the Pardeys. I’ve poured over Jimmy Cornell’s World Cruising Routes and anxiously combed through Handling Storms at Sea by Hal Roth. I’ve compared displacement to length ratio. I’ve listened to sage advise from old timers who lament the passing of  “proper” sailing yachts and I’ve joined the debate on anything from multihull vs. monohull, inboard vs. outboard rudders,  solar vs. wind power and reefing at the mast vs. from the cockpit. I’ve learned that no one boat does it all, nor should it—especially one that is destined to sail across oceans.

When I found my current boat in Oxford, Maryland, the sailing gods smiled on me. Octavia is a 1991 Pacific Seacraft 34. Designed by Bill Crealock, she’s the little sister of the venerable Pacific Seacraft 37 and comes from a true blue water pedigree. In light of 21st-century design trends, she’s old fashioned with a canoe stern, a springy sheer, long overhangs and a snug cockpit. If form follows function, these functional features form one pretty boat. She gets more dockside compliments than I can count. From a practical perspective, she’s built like a brick you know what and while she’s a tad heavy, she’s no slouch when the winds pick up. I feel safe on her. She’s solid. She’s the real deal. And I can take stock in that.

I bought her because I have a dream—a trans-Atlantic passage to England or Ireland, then maybe on to the Med or even Scandinavia. But first, I need to implement an exit strategy from full-time work, see my grandson become a toddler and convince my new and wonderful wife that sailing is more than a hobby or mild obsession. It’s a way of life.

And then there’s Octavia. Although I bought her cruise ready, there’s always one more thing that pops up on the to-do list. The latest project is to secure the cabin sole hatches so they stay put in the event of a capsize. I dread the thought. They say good seamanship starts before we set sail. I get that.

I’ve singlehanded most of my 28 years of sailing. I like the self-reliance and the sense of accomplishment I feel when I get the boat from here to there—even when “there” is at the end of a 30-mile coastal run. I’ve cruised the Chesapeake, southern New England and made a couple 24 plus hour offshore solo runs to test my mettle. Several years back, I crewed on an Island Packet 44 from Newport News, Virginia to Bermuda. It was a pleasant run, the kind a sailor wishes for, but it was light stuff compared to what could lie ahead when I make my escape. 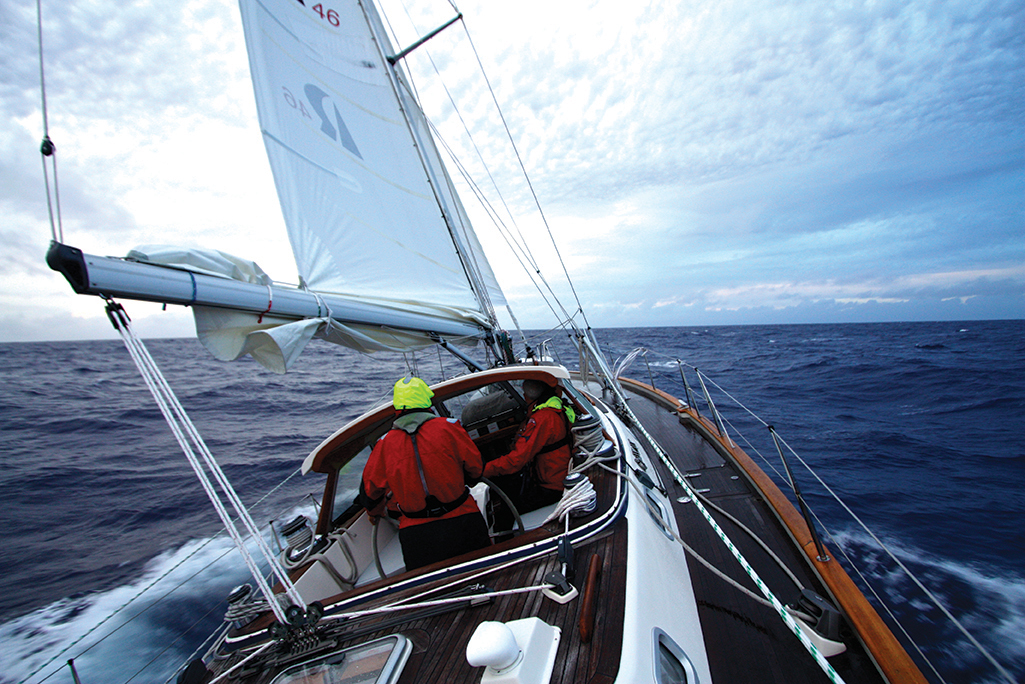 I realize apprehension is normal and felt by the most seasoned voyagers. But, as I prepare Octavia and contemplate the realities of actually shoving off someday, basic heart-of-the matter questions are begging for answers. Is voyaging really for me? Do I have the right stuff? Is all this preparation going toward a realistic goal or am I dreaming? I’ve heard of sailors who set off on the cruise of a lifetime who quickly become disillusioned and quit after the first leg. I don’t want that to be me.

I’m busy prepping Octavia, but what about prepping me? What I needed was to get some real sea miles under my belt. I needed to experience some stinky weather, sleep deprivation, gear failure, setting a third reef in the wet howling darkness, and all the good stuff, too—star filled skies, the rush of water below the leeward rail and the clarity that comes from unplugging from modern life. Most importantly, I needed to do this under the supervision of an experienced skipper/educator.

To quell these fears and to gain the valuable experience I was after, I decided to book a berth with Mahina Expeditions and John Neal and Amanda Swan Neal aboard their Hallberg-Rassy 46 Mahina Tiare III. They have accumulated enough sea miles to circle the globe seven times, so I felt comfortable in this decision. I chose Leg One on their 2014 expedition schedule—the 2,700 mile run from Auckland, New Zealand to Tahiti. The expedition literature characterized the leg this way. “Valuable storm sailing and weather plotting is guaranteed on the edge of the Roaring Forties in an area of fast-moving fronts…This leg has proven as challenging as our Cape Horn-Antarctica 1996 expedition.”

“That oughta do it,” I thought.

I submitted my application in January 2014, was accepted, and in early May I was shaking hands with my crewmates on a dock in Auckland. Here’s the short version of a long, incredible trip. I had a blast and then I didn’t and then I’d have a blast again. I’d be awestruck by the sheer vastness of the South Pacific, then while donning my wet foulies for yet another squally 0400 watch, I wondered why I hadn’t rented my favorite beach cottage in Marin County for the month. Then, while at the helm—locked into a groove, beating to windward—I thought I’d died and gone to heaven. No two voyages are alike and no two perspectives are alike, but for me, the voyage revealed a lot about myself and what I could expect when I set off on the big one. Voyaging is not easy. It can be uncomfortable. It can be scary. But it will be immensely rewarding.

When we made landfall in Tahiti after 21 days and 2,700 sea miles, I arrived a better sailor. John and Amanda run a tight ship and I learned a great deal. Their method is hands-on and pragmatic. It’s hard work, but that’s what I signed up for. The crew got along swimmingly. There was laughter and camaraderie. I made friends for life and it wasn’t all watch-keeping and wet foulies. 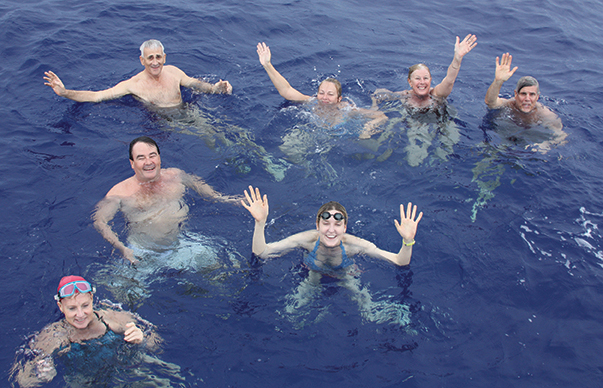 After a long stretch of rough seas, we were rewarded with mid ocean swims. Amanda provided tasty meals from her Essential Galley Companion. One evening while motorsailing, John astutely recognized the smell of an overheating engine. We shut it down immediately and proceeded under sail. Later that night when the crew was settled in, he stealthy replaced a broken impeller while I slept undisturbed just six feet away—a testament to his skills and to my exhaustion.

There was class everyday. John and Amanda were a dedicated duo who clearly enjoyed sharing the breadth of their knowledge. We serviced winches, studied sail design and got a how-to on provisioning and diesel maintenance. We learned how to take noon sights, set storm sails, deploy warps and a drogue. Amanda even brought out the sewing machine for a sail repair demo. 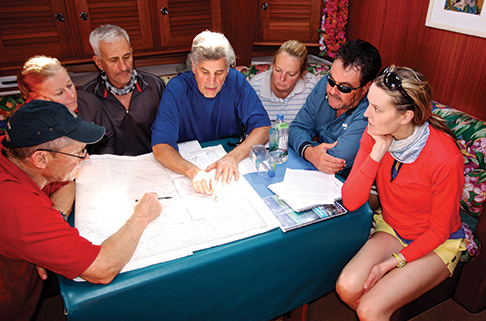 Navigation skills were honed and proper logkeeping was rigorously enforced. Daily weather fax analysis was a post breakfast ritual. Now, when I look at a weather map, it comes to life. Good job John.

So, now what? Is voyaging for me? I’m still processing the trip, but this is what I came back with. I’m not sure a solo trans-Atlantic is my calling. If I go solo, I think I’ll stick to shorter passages. While the Gulf Stream has its challenges, the Bermuda 1-2 race is an interesting goal for the near term. As for longer passages, I’m more inclined to have crew onboard to share the load and the joy. I like the idea of getting into the delivery circuit or joining another expedition—high latitude sailing sounds awesome.

More than anything, my voyage aboard Mahina Tiare III was confidence building. It has already paid big dividends. When I stepped back onboard Octavia, I saw new and efficient ways to sail and equip her. Now, when the time comes to shove off, I’ll be as prepared as my boat.

But, I do have a confession to make. The other night, while thumbing through one of my glossy sailing mags, I found myself intrigued by a popular fat fannied production boat with twin helms and a patio-sized cockpit. Maybe I should sell Octavia, I thought. Maybe I should get a bigger, more accommodating boat and stay closer to home. Nah. What was I thinking? I’m no longer a reluctant voyager.

Karl Westman is an executive music producer at a large NYC ad agency. When not making music for TV ads, he enjoys sailing the waters of eastern Long Island. He holds an OUPV license and is forever finding ways to improve his seamanship and sailing skills.

View all posts by Karl Westman