Though Cruz Bay on St. John’s west coast is considered the preferred anchorage for cruisers who want to be close to the island’s version of civilization, the ferry to St. Thomas, and a wilder night life, we chose to anchor instead in Coral Bay, a large, protected harbor in a bowl surrounded by mountains on the island’s east side. The sizeable entrance allowed us to sail into the anchorage and find a comfortable place to drop the anchor, despite the dozens of boats already there.

A short row to shore brought us to a floating dinghy dock near Skinny Legs, the legendary waterfront burger joint and hangout for local sailors. A road meanders around the bay, past the ball field where every spring the St. John Blues Festival is held, drawing music lovers from across the island chain. Several waterfront bars, restaurants and a small grocery store fulfill the usual cruiser needs.

As fun as Coral Bay is, a trip across the island is essential. It is possible to explore the beaches and national parks by bus or stand at the bus stop until someone going your way offers you a ride. Don’t hold out your thumb, though, for here, as on most islands, you point in the direction you wish to go. The best entertainment value we have found is the $2 bus fare between Cruz Bay and Coral Bay. The sinuous mountainside roads have switchbacks so tight that it is not unusual to see a truck backing up to negotiate the curves. With views of sheer drops out the window often ending in turquoise bays, the ride is a bus version of a rollercoaster. The only greater thrill we found on St. John was taking the same route while standing up in the back of a pickup truck. Watch out for low tree branches.

We discovered one of our favorite spots on St. John thanks to the wanderings of our oldest son. A dirt road leads up a hill next to the Moravian Church down the street from the dinghy dock in Coral Bay. Past where even 4-wheel drive vehicles dare go, the road becomes a path through the woods. After nearly an hour of assuring us that we were almost there, Nick led us into a clearing. On the edge of a cliff overlooking Coral Bay were the stone ruins of several structures. From here we could see the anchorage and Eurisko far below us in the water-filled valley between mountains. 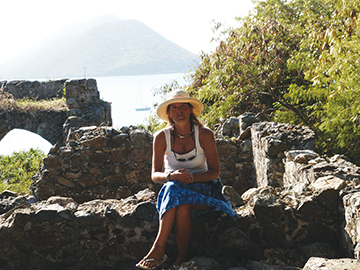 St. John is crisscrossed by trails with similar hidden surprises, many of them within easy walking distance of Coral Bay. Wild donkeys often join you on your hikes. While sailing through the Virgin Islands, be sure to drop your hook in Coral Bay. Go for a walk, have a burger, pet a donkey, and enjoy the spectacular mountains and beaches that this little island has to offer.

View all posts by Connie McBride