Sitting peacefully on anchor, it was impossible not to notice the new cruising boat steaming into the anchorage.

HE (Hand cupped over his eyes, pointing into the sunlight and yelling): “Port. More port, over there.”
SHE (Squawking): “Harold, Harold, I can’t see. The sun is in my eyes.”

Still not slowing down they motored by us, thankfully, but unnervingly with hands still shading their eyes. They yelled and squinted, turned and circled, and eventually dropped their anchor on our port side. So I watched as she swung the boat to windward.

On the bow, Harold dropped the anchor off the bow with the boat just out of gear but still moving forward. He just dumped the chain, perhaps 30 feet of it, into 15 feet of water—two to one. She at the helm did not put the boat in reverse to set the anchor. Instead, they cut the engine and went down below. The chain hadn’t even taken up, the anchor had not set and no one was keeping watch. I was glad there was no one downwind of them.

How many times have I seen such nonchalance during such an important procedure? Too many. Is it ignorance or stupidity that makes people fail to follow correct procedures for safe and secure anchoring? And just what are the correct procedures, the written guidelines that accompany good old common sense?  Here’s my list. 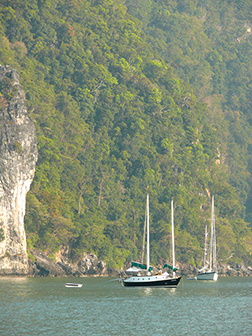 1. Scope: An all chain rode should have a scope of five to one with the minimum being three to one. For a nylon and chain rode, the scope should be five to one in normal conditions and seven to one or more in strong breezes.

2. Room to swing:  For some reason, new boats sailing into an anchorage seem to gravitate toward boats already on anchor, as if those who got there first had picked the only safe place to drop the hook. Don’t anchor on top of them, as if that spot offered the only good holding in the anchorage. For peace and tranquility, as well as for safety, give fellow cruisers room to swing in a full circle as the wind shifts. Remember that boats on all chain rodes swing less and more slowly than those with nylon and chain rodes. Be sure you are not out of synch.

3. Set the anchor:  Anchor with the bow pointed directly into the wind and let the anchor go when the boat has stopped moving forward. Know how deep the water is so you can calculate the amount of scope you need. As the anchor is slowly lowered and the chain paid out, the boat should fall back, either with the wind or in reverse, until the slack in the rode is taut and the boat is no longer moving backwards. Using visual bearings on stationary objects to port and starboard as you continue to reverse the engine, you can check to see if the anchor has set securely. You can instantly tell if your boat is dragging so you can re-anchor immediately.

4. Anchor lights: I know it sounds obvious to recommend being strongly lit up, but I hate to say, I’ve seen many boats with no anchor lights, or with very weak lighting. One day a fisherman in Sumatra approached us, saying he nearly hit a neighboring yacht in the night that had no lights on it. When we arrived in Malaysia, the same yacht, anchored near a channel into a marina, still had no lighting. We had come to know the couple and their two children and we asked them why they didn’t have an anchor light. Far from being sheepish, he replied with a chuckle, “That is why we have a steel boat.”

5. Reassess: Never be too proud to realize you have anchored in a bad spot, too close to land or other boats. It’s always better to re-anchor straight away rather than in the night if the need arises.

6. Seabed: Learn how to read the water color and shoreline for signs of what might be beneath you. If there are sandy beaches and the depth rises gradually, you will likely anchor in sand. If you are in an inland waterway or river mouth, the bottom will likely be muddy and soft. If the foreshore is rocky and boulder strewn, then the bottom will be more or less the same and probably also covered with weed. Where there is reef and coral heads, be sure you don’t drop the hook into the coral or allow the chain to wrap around the coral heads. There will be sandy patches nearby to anchor in. 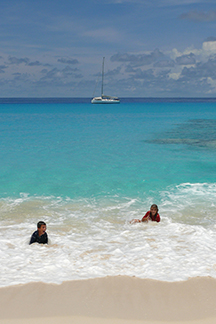 So, despite the fact that Harold and his squawking wife seemed content to slip into the belly of their boat without setting their anchor, I certainly wouldn’t want to be anchored too close to them, and I most definitely wouldn’t want to be on that boat if it drifted off in the night, with or with out them on board. Anchoring truly is a simple task that provides you safety, security and insurance; not to mention a good night’s sleep—sweet dreams.

View all posts by Rachel Robertson