Spring is upon us, and it’s time to ort through the various treasures hidden in the dark recesses of my seabag. Some are old standbys, others recent additions. They all have their place as sailing season warms up  (published April 2017)

That humble, tattered canvas seabag doesn’t seem to get lighter with age. Perhaps the contents provide a means of tracking some of the problems I’ve encountered over the years and the solutions I’ve attempted to adopt. More miles. More problems. More potential solutions. The bag is getting heavier. Depending on the type of vessel I’m joining, the distance and destination we’re attempting, and my predisposition to running through yet another airport with gear on my shoulder, some or all of the following may be joining me on my next passage. 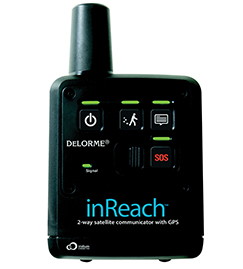 InReach. Virtually all of the vessels on which I race, deliver or mentor crews have effective means of communication. Most are satellite based phone systems such as Iridium handheld devices. The better organized, long distance boats have their radio or satellite communications systems interfaced with a computer for “hard copy” emails, weather reports and other information. However, having said that, I find the InReach tracking and communications device allows multiple people to track our passage, and if they need to get in touch with me quickly rather than waiting for the daily exchange of emails, the smartphone in my pocket is interfaced with the InReach device. With an unlimited number of messages, I can carry on a brief conversation and refer to the longer, more detailed emails in the computer if necessary. Overall communications costs are reduced while a real-time aspect to those communications is enhanced – all while we’re safely tracked by people who care.

Knife. I bought my first good knife and sheath in 1981. It was made by Steve Lirakis, and had an additional pocket for a pair of stainless steel side cutters. We were about to take Ted Turner’s Tenacious out of Cove Haven Marina in Barrington, RI in January, and before we could re-launch the boat, we would need to use chainsaws to cut holes in the 9” thick ice. The delivery south appeared to have more than the usual risk involved, and having a good knife might mean the difference between life and death in some circumstances. The knives and side cutters have changed over the years, but the sheath remains. Now it carries a Myerchin serrated blade that is almost sharp enough to cause damage to anyone looking at it. I only use it in extreme circumstances that have included cutting away Kevlar mainsails on two separate dismastings over the years. The blade is still viciously sharp. In addition to the Myerchin knife, I also carry a Gerber multi-purpose tool for quickly addressing a number of issues that come up. 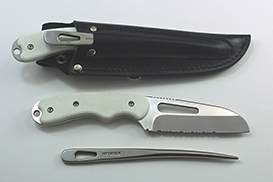 GPS. Time and experience has encouraged me to spend more time in the nav station and a bit less time on deck. For the past fifteen years or more, I’ve carried my own GPS, and it’s certainly time for a new one. My old, reliable model has NMEA output, remote antenna and power supply, and I bring additional reserve batteries. On several occasions the boat’s GPS ceased functioning, and I’ve been required to plug my own unit into the vessel’s laptop to access the performance, charting and navigational information. I know the unit works, and during lightning storms, I take care to temporarily stow the handheld Garmin in the galley oven to shield it from possible damage during an electrical storm. The stove acts as a Faraday cage, re-routing the lightning around the oven.

Climbing harness. I spend more time in the nav station now, but I still seem to find occasions to go aloft. Having my own climbing harness means never saying I’m sorry that the boat only has a conventional boson’s chair which won’t help to keep me safe while aloft in a seaway. A number of bowmen pioneered the use of mountaineering gear and climbing harnesses’ application to the sport of sailing in the early ‘80s. We used the climbing harnesses in the Southern Ocean where night flights to the top of the rig in 30’ to 40’ seas were part of the job. The designs have continued to improve in both safety and comfort, and I’ve learned to trust both my Black Diamond as well as my Mammut harnesses with my life. Now, as more boats carry their own climbing harness, I sometimes leave my own version at home. It’s one of my “optional” items, but I always keep it close to my seabag at home. I want to be certain that one will be available when needed. 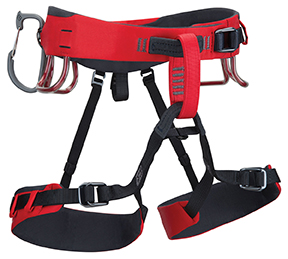 Block and Tackle. On some of the multihulls on which I’ve sailed, we have had several rod rigging failures. My own suspicion is that the continuous rod from the masthead, bent around the spreader at approximately a 34 degree angle and back to the base of the mast, might be too severe, causing the rod to fail at the spreader tip. While a high capacity block and tackle system with strong, high tensile line can be used for a wide variety of tasks, it has certainly made jury rigging a suspect rig a relatively easy job. So, if I think the rig may be somewhat marginal or the passage exceptionally rigorous, I have been known to bring my own heavy duty block and tackle. It doesn’t always accompany me, but sitting next to the climbing harness beside my seabag, it raises some valid considerations prior to packing for my trip.

Headlight. Another contribution to my seabag that has its roots in mountain climbing is the headlight. Originally used by cave divers, headlights have made it possible for us to take the flashlight out of our mouths and continue to see at night. The design and efficiency of the headlights has also greatly improved with time. Whether you use conventional incandescent bulbs, brighter halogen bulbs, energy efficient LED technology or a combination of various types of lighting, there are almost unlimited numbers of ways to use the headlight. I’ll have a Petzel headlight with me whether I’m in the nav station or aloft, tracing some wiring or tying off a broken shroud at 2:00 am.

USB “thumb” drive. Since I am spending more time as a navigator than a bowman, inevitably the role of IT manager requires that I can get, process and transfer information quickly and easily. I usually bring my laptop with me in my backpack. I always bring my thumb drives. Usually the boat with which I’m racing or the one I’m delivering will have a laptop. Having the ability to bring my own information from home helps smooth the transitions from being ashore to being offshore and back again.

Hand-bearing compass. While new tools make our work easier in many ways, traditional tools still have their uses. Most boats will have their own hand-bearing compass, but since I’m aboard a rather wide variety of vessels, I find that having my own compass is quite helpful. The bright yellow Weems and Plath hockey puck has clear numbers that can glow in the dark when charged up using a flashlight. At night, I can quickly and reliably determine whether an oncoming ship is going to pass ahead or astern, even without relying on the plotter’s AIS. As a racing navigator or tactician, a hand-bearing compass can also help determine whether you’re gaining or losing against your competition.

Naturally, as my seabag now stands in the corner of the closet, it has numerous things stowed in there. For warm weather trips, there are the lightweight, long sleeve synthetic shirts, bathing suit, and deck shoes. For the extreme cold weather trips, there are the Smith ski goggles, balaclava, Chameau sea boots, synthetic gloves, Patagonia socks, Musto long johns and multiple layers of various types of fleece, and synthetic shirts.

Foul weather gear. Whether the passage is a cold weather trip or a sunny sprint through the tropics, I always bring my Henri Lloyd foul weather gear, provided to me through Team One in Newport, RI when Rich Wilson and I set the speed record from New York to Melbourne, Australia in 2001. There are many places you can get various types of sailing gear. Team One is among the best.

It seems that with time and experience, the seabag and backpack get heavier. Regular items include sunglasses, laptop, and cell phone with contacts, charger and Internet capabilities. Also coming along for the passage you’ll find a spare pair of glasses, passport, wristwatch with alarm and countdown timer, man-overboard strobe, international electrical plugs, safety harness with tether, and a plastic bag for the dirty laundry that needs to be quarantined on the return trip home. The first job after returning home is to get it all washed and re-packed, ready for the next trip. The passages and destinations may change, but with only a few exceptions, the gear remains virtually the same.