The azure sea was smooth as satin, touching the infinite sky under a veil of silvery haze. We had been motoring for nearly eight hours from Kythnos to Poros, a tiny island clinging to the tip of the thumb of the Peloponnese, in Greece. Time seemed suspended as we moved through the endless blue, when suddenly a strange silhouette emerged just ahead. We kept our eyes glued to it, and slowly it resolved into the conning tower of a submarine. Her hull gleamed like blued steel. This interesting encounter helped our minds refocus from the sapphire universe back to the known world and our impending landfall. 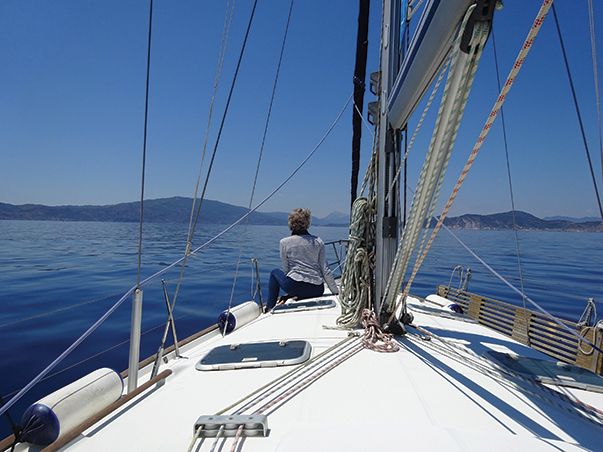 As Ron steered Celador into the narrow channel separating Poros from the mainland Peloponnese, I was struck by the unexpected beauty of the little town in the mid-afternoon sun. Red tile roofs crowned yellow and white stone houses, climbing like steps the hill. The white clock tower is a beacon that can be seen from a distance. I took a quick “bird bath” shower on the stern and hit the streets refreshed. 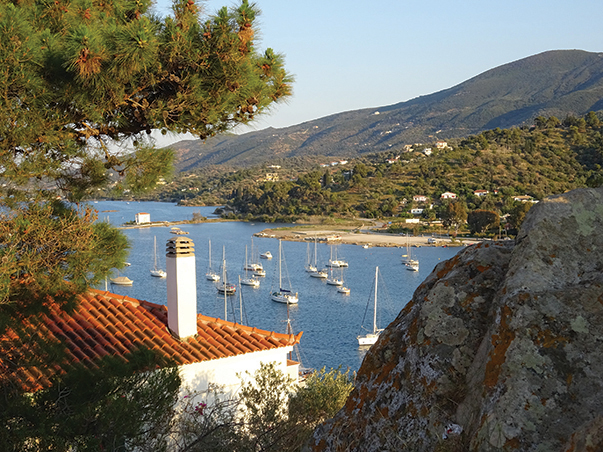 Walking along the waterfront, I came to a winding stairway between two buildings, leading up into the chora, the medieval era old-town. Shaded narrow lanes led me to the Garden Taverna, and I decided it was a good time to rest. I was welcomed by Maria, who was also the school headmistress, her shy husband Yanis, and their mother-in-law Muriko, who is Japanese and married a Greek sea captain some 41 years ago. How strange it was to hear Japanese-accented Greek spoken!

We chatted away until Maria had to leave, at which point Muriko and I continued to chat in sign language and pidgin English. Muriko was born in Nagasaki, and at the age of 10 she was there when the atomic bomb fell. Dismayed, abashed, and slightly horrified, I gasped and said, “oohhhh”….she looked me in the eye and shrugged, and matter-of-factly replied, “Pearl Harbor”.
Waving farewell, I walked down through the chora and along the waterfront. There I was hailed with a wise crack from two sailors at a cafe table, so I quipped back a reply. Amused, they invited me to join them, where we continued heckling each other over a glass of wine. Robert cruised from Sweden and Anton is a charter skipper with decades of experience worldwide and a gift for storytelling.

It turns out he’s an old friend and shipmate of Rod Heikell, author of the iconic Greek Waters Pilot and Turkish Waters and Cyprus Pilot (Imray, Laurie, Norie &Wilson Ltd.,publishers) and is an acknowledged contributor to these definitive cruising guides. He shared wonderful history, trivia and cruising tips for this area. I wish I could remember all the things he told me… the prominent mountain profile known as the Sleeping Lady was the lover of Poseidon and mother of Theseus…Patrick Leigh Fermor, (charismatic author and daring commando leader who kidnapped a German general in Crete in WWII) once lived here in nearby Kardamena…the feral cats with clipped ears have been neutered. Poros means “passage”, and the people of Poros are called “Poriotis.”.. pronounced “poor yachties”!

I returned to the boat delighted with my adventures ashore. Ron and I went out later to explore the town. Browsing through shops, I bought some beautiful carnelian worry beads and a scarf, and we had a nice dinner at Apagio, a waterfront cafe with great local food. We got back to the boat in time to witness a saint’s day procession on the waterfront with the Orthodox priests and a naval escort, incense perfuming the evening air. 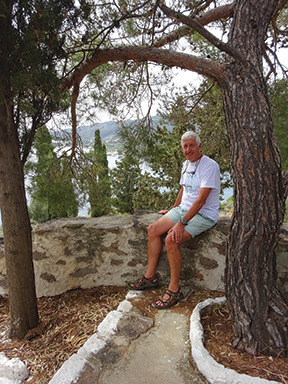 The next morning, the wind was up and Ron chose to stay aboard. Anton had told me of a little pilgrim trail running along the ridge over town and how to find it. Climbing up a steep path to the little chapel at the end the ridge, there were beautiful vistas everywhere, and silence but for wind in the pines and birdsong. About halfway along, I took a wrong turn and ended up scrambling down a gully back down to the chora. I returned to Celador to find Ron on anchor watch; he thought the anchor had dragged, and the boat nearly went hard against the dock when ferry wash hit us. We started to reset the anchor but it was well set; fortunately we just needed to shorten the anchor chain.

The next afternoon we explored the shops and visited the archaeological museum on the waterfront and an exhibition of historical photos of fishermen and their boats from the post WWII period. An upcoming antique boat regatta in Poros brought many of these restored work boats to the Poros waterfront, where we strolled and admired them. We ended up at Apagio again where the owner Stavros, his French wife Liz and their sons prepare local dishes from ingredients they grow and gather themselves. I had a cheese packet…two slices of feta sandwiching a layer of red, green and hot peppers, baked in filo and topped with a drizzle of honey and sesame seeds. Salty, sweet and savory…delicious!

Legend says that once you have been to Poros, you will return again. It’s true. We went to Aegina for a day and came right back. The crossing was only 15 miles and we arrived mid-morning. The approach to Poros from the north is another lovely view.

After the boat was secured, we hiked out of town and north of the bay, past classic antique work boats and a ramshackle mansion, and another great view of the town. We rested in the shade of reed umbrellas on a pretty little beach. We made our way back to Apagio, where we learned more about the history and higlights of the area, and were treated to fresh bread and large green olives and capers home-prepared from their own groves. Lovely time, lovely people.

Later we headed up the hill to Dimitri’s, the steakhouse attached to the butcher shop, for steak dinner. It was crowded with Greek families and decorated with portraits of Greek independence fighters from 1821. Afterward we walked down to Platano Taverna where I was lured in by live music. The place was jumping and the music was typical Greek, with guitar, vocals, bazouki, fiddle and keyboard. Often people would dance in the Greek style, and it was fun to watch. I moved closer to the music, from a small table on the back wall, to the table near the tree, and then right up front. 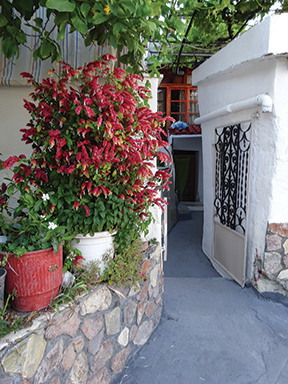 A group at the next table were friendly, and one of them reached over and topped up my glass from their carafe. A Greek dance began, and they waved to me to join. So, I did! They invited me to join them at their table; Olga, Adonis and Yanis from Greece, Gunhilde from Norway who’s lived here for 17 years, Mick and Deb, the Brits. I got back to the boat at 1:30 a.m…. an hour I never see unless I’m on the graveyard watch!

Rising early, I went to the church at Agio Georgios, curious about the Greek Orthodox service. The padre came swinging his censor down the aisle and raised an eyebrow when he saw me; I was definitely not one of his regulars. There were two cantors singing constantly the whole time; they started at 7:00 and were still chanting well after 10:30, after I had returned to the boat, had coffee and returned with Ron. We climbed to the top of the ridge to walk the pilgrim trail across the island, all the way to the chapel overlooking the channel entrance.

We meandered down by flight after flight of steep stone steps back down to the quay. We stopped for coffee, window shopped, and said farewell to Anton and other sailors and townsfolk whom we came to know during our time here. Stavros gave me a large, fragrant bunch of wild oregano, gathered in the hills that day, as a farewell gift.

Poros has become one of my favorite places, thanks to the welcoming Poriotis. It is one of the friendliest and most hospitable places I’ve ever been. I hope the legend of always returning to Poros comes true for me. 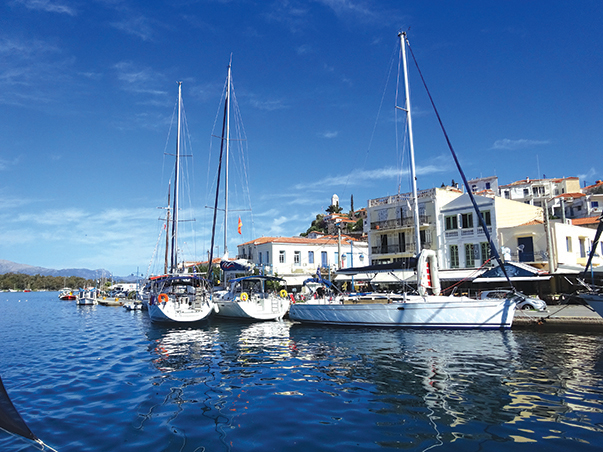 Diane Gorch gets her sea time in by joining yachts seeking competentcrew. She has logged nearly 10,000 blue water miles, and will be
sailing in Iceland in summer 2017. You can follow her travels at www.ricochetOK.blogspot.com.