It is not every day I get to go sailing with Cam Lewis, who happens to be one of America’s if not the world’s most accomplished multihull sailors. He has sailed everywhere, raced everything and won all sorts of multihull events. So, it was indeed a pleasure to meet up with him aboard the new Dragonfy 32 at Bert Jabin’s Yacht Yard in Back Creek, Annapolis, right after the fall sailboat show.

The Dragonfly was brand new and just out of the show so we had to figure out how to get it rigged properly and set it up for the sail trials. And, right after the trials, Cam was heading off for a solo delivery on the boat northward to New Jersey. The 32 is a system rich environment with strings running every which way. But this was nothing for Cam, who had it sorted in minutes. 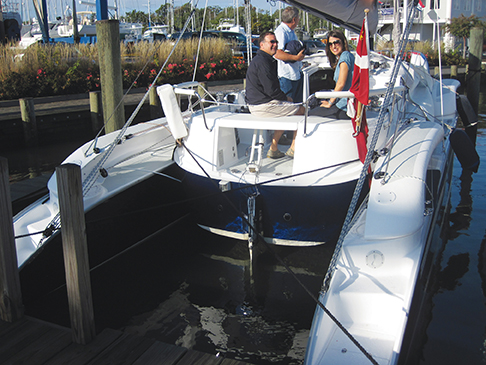 The boat at the dock was folded up with the amas pinned back against the sides of the main hull. This is the most dramatic feature of Dragonflys. The amas fold in and out so you can moor the boat in a normal marina slip. Dragonfly calls this their Swing Wing system and it has been on every boat since Dragonfly’s owners Borge and Jens Quoening invented the system in 1998.

With the 20-horsepower diesel and sail drive ticking over slowly and the bow thruster—yes, bow thruster—working, Cam steered us out of a tight slip and headed down the creek. To deploy the amas, all we had to do was release one control line and pull on another and soon they were fully extended. The operation took two minutes per side. Once deployed, the amas are locked into place with diagonal wire stays that keep them from folding up suddenly when you are screaming along at 12 knots. That could be bad.

The Chesapeake Bay was being unusually cooperative by offering a pleasant 10 to 12 knots of wind. Often it blows only zephyrs. We hoisted the big mainsail and immediately the boat felt alive and ready to go. We switched off the engine and rolled out the jib. To our surprise, the jib was a small 100 percent sail instead of the 135 to 130 percent headsail that we had expected. So, we were somewhat under canvassed. (As it turned out, the sailmaker had used a template from a different owner who was having a heavy weather jib cut for his boat to complement the genoa.)

But, we went on undaunted. With Cam calling sail trim we hardened up and sailed out into the bay making a pleasant seven to eight knots in the 10 knots of breeze and held a 30 degree angle to the apparent wind. The boat had a little weather helm that we corrected with traveler trim. And, it tacked easily and carried its speed pretty well through the eye of the wind. 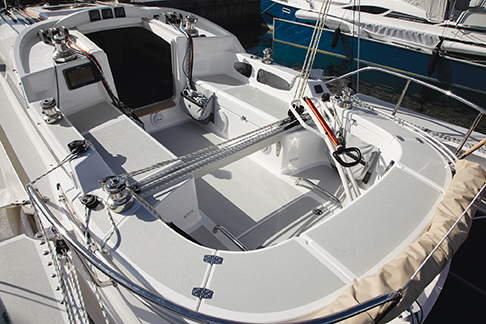 Off the wind, we missed the extra sail area of a genoa. Still, on a broad reach, we were able to power her up to eight knots in the puffs. The steering was very sure and the boat felt incredibly stable and seaworthy.

After an hour, we headed back into Annapolis Harbor at a fairly low angle to the wind and found that with some tweaking of the barber haulers, which are standard equipment, we could get a good shape to the headsail and maintain our eight knots through the water. The upshot was that the new Dragonfly 32 sails well on all angles even with a small jib. Had we flown the standard genoa, I am confident we would have seen two or even three more knots of speed.

In the fall of 2013, I made a visit to Denmark to visit with several major marine companies there. Dragonfly was one of them and my tour of their plant gave me a good idea of how the company operates and how they build so much quality into their boats.

Like many boat building companies, Dragonfly is the creation of one man who loved to sail and loved trimarans. In 1967, Borge Quorning launched his company with the intention of building only state of the art cruising and racing trimarans. In the nearly five decades since, Quorning Boats has built over 850 new boats for discerning customers around the world. The boats are built on a semi custom basis, so each one can be tailored to an owner’s specific needs.

The boat’s all have infused and cored vinylester hulls and decks that are light, stiff and strong. The rig has a rotating mast that is fitted with diamond stays and adjustable running back stays. The jib is on a fixed roller reefing system while the reacher and asymmetrical spinnaker fly free on the carbon bowsprit.

The 32 was designed to fill the gap between the popular 28 and the 35 and borrows a lot of the details and design aspects from the 35. The interior is remarkably large for a high performance tri. The forward cabin has a comfortable V-berth that is large enough for two adults. Just aft is the head compartment that can be closed off with doors. Aft and under the cockpit, there is a full double berth that is both spacious and somewhat private. 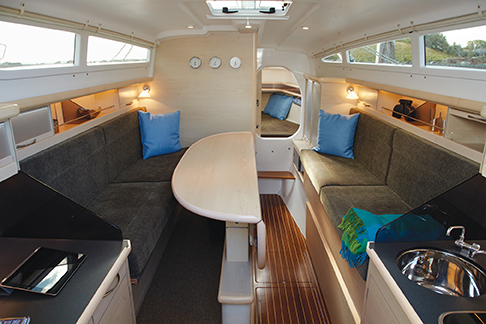 The saloon is spacious and airy and has ample headroom. The boat we sailed had the premium teak trim interior finish. The standard finish is a light maple that adds to the overall brightness of the cabin. The galley is positioned on both sides of the companionway and has a two-burner stove, sink and microwave oven. The counter to port doubles as a nav station. The settees both make good single berths and the port settee and table can be converted into a spacious double berth.

To our surprise, we found that there are comfortable bunks for six adults aboard the 32 and an enclosed head, facts that made us wonder how they managed to fit it all in without creating clutter or confined spaces.

Borge and Jens Quorning have built a successful business by creating high performance cruising trimarans that are a pleasure to sail and race. The boats handle well, sail fast and are good at sea. They may not be the lightest on the racecourse and that’s because they are also comfortable cruising boats. The craftsmanship, engineering and finished joinery that goes into each boat is of the very highest standard. 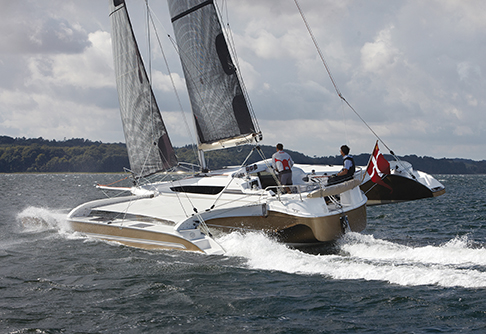