It was December, and a newly purchased J/160 needed to be moved from Florida to Rhode Island for a refit. The owner hoped to have his boat ready for the spring, and the yard needed the winter work to keep their crew busy. The first half of the trip was quick—a textbook operation of speed and efficiency. The second part? Not quite so easy.

After getting out of the Gulf Stream in southwesterly winds, somewhat north of Norfolk, VA and almost due east of Atlantic City, NJ, the wind shifted to the northwest. It was cold—sharp, biting cold. If we went on port tack, we would head toward Halifax, Nova Scotia and even colder conditions. Starboard tack took us on a heading slightly south of west, but would leave our options open and perhaps keep us warm enough to prevent icing on the deck. Depending on the salinity of the water, salt water freezes at around 27 degrees Fahrenheit. If spray is flying across the deck, headsail changes can quickly become a life-threatening, ice skating adventure on the bow.

This wasn’t my first encounter with extreme cold weather sailing. Perhaps I’m a slow learner. Perhaps I was asked because of my experience in dealing with off-the-wall conditions. I’ll leave that assessment up to you.

Other notable cold weather passages include the not-to-be-forgotten “chainsaw” delivery in 1981 aboard Tenacious, Ted Turner’s sloop. That boat needed to be taken from Cove Haven Marina in Barrington, RI to Florida in December for the winter races of the SORC. Prior to re-launching the boat, we had to cut holes in the nine-inch-thick brackish ice in order to put the boat in the water. Then, we needed to be led out of Narragansett Bay by a Coast Guard icebreaker, which was working outside Block Island to deliver heating fuel to those islanders. As we approached the mouth of the bay, we waited in Newport for a couple of days until the weather became a more balmy 28 degrees before departing.

At the time, I was on a mission to test myself. I wanted to see if I could deal with the rigors of my first Whitbread Round the World Race. The mileage in that particular event would require extended passages through the Southern Ocean complete with icebergs, snow squalls and temperatures well below 40 degrees Fahrenheit as we raced around the Antarctic.

Since that time, I’ve managed to sail more than 50,000 nm in just the Southern Ocean—above and beyond my miles sailed in virtually every other ocean of the world. Sometimes those passages were with full racing crews. Other times they were sailed double-handed. But they were always cold, and care needed to be given in order to mitigate the effects of that cold. More than a few lessons have been learned regarding cold weather sailing—lessons that go beyond merely knowing that I don’t like being cold.

Cold, of course, causes some amount of discomfort. We can dress more appropriately, which certainly helps. Modern synthetics and traditional wool go a long way toward helping to eliminate some of the discomfort, even in a wet environment. I’ve heard that 40% of one’s body heat is lost through the head, so wearing a balaclava or hat can actually help keep your hands warmer, strange as that may seem.

What begins as discomfort can increase to the point of pain in hands and feet—I’ve seen people become relatively useless in performing simple tasks like sail changes. It’s not pleasant, but years of doing construction work in Chicago gave me a certain understanding of how the pain goes away eventually. The question then is whether or not your hands are still somewhat functional. It’s better to keep your hands warm in the first place, but the sorry reality is that there are few effective means to keep your hands both warm and useable in a cold environment. Mittens are cumbersome. Wool gloves may provide the best results, and if you have five pairs of them safely and warmly stowed somewhere, one may actually be dry. Eventually, they get wet, however, and only provide minimal help in keeping warm. Neoprene gloves shouldn’t be too tight, and eventually they, too, get cold. Perhaps hand-warmers in pockets provide some relief. I’ve simply learned to ignore the discomfort while paying attention to keeping my hands warm whenever possible and not allowing them to become totally unusable. Your hands might be needed to save your life. Take care of them.

On one delivery, we departed Newport at 3am on a cold December morning, heading south to Bermuda. The temperature was 24 degrees, well below freezing, and a northerly was gusting 25 knots. The trip was only doable because we were sailing on the leeward side of the land with relatively flat water, heading downwind with minimal spray coming across the deck. By the time we were into a somewhat large seaway, it was 11am and the temperature was up to 30 degrees, which helped us avoid icing, an extreme danger. If there is enough ice buildup on deck, it will sink the boat. And given the fact that most of the icing is likely to occur on the bow, if you’re punching into waves with severe icing on deck, you could go down by the bow.

Whenever I’m involved with extreme cold weather sailing, I’m always aware of what the wind is doing. What are my wind angle, wind speed and forecast conditions? How is the spray coming across the deck? What is the temperature likely to do? Increase or decrease? Can I adjust my sail plan prior to icing becoming a problem? The less I need to go forward or have others go forward when there is ice on the deck, the better. I’m not shy about reminding the crew that falling overboard—whether in a bay, lake or elsewhere—in cold weather will kill them just as dead as if they were in mid-ocean. As a general rule of thumb I mention that if they were 50 yards from the shore, swimming in 50 degree water, they would have a 50/50 chance of surviving long enough to get to shore. Ice adds risk to the situation offshore.

Hypothermia adds a more insidious risk to the winter offshore situation. I’ve had the initial stage symptoms, and recognize that if you’re beginning to shake uncontrollably from the cold, it’s time to correct the situation. Occasionally, additional warm, dry clothes will help. Sometimes you may need to go into a warm room, drying locker or close to the engine room, and sometimes the uncontrolled cold is due to the fact that you are not feeding your own “heating system.” Clothing does not create a warm environment—you do. The clothing merely allows you to retain some of that warmth a little longer. If you’re cold and added clothing doesn’t correct the situation, perhaps you need to eat more. A high-fat diet will quickly add to your own BTU output. If I know that the weather is going to be particularly cold, we will often have pasta al pesto for dinner that night—and I’m not shy about adding olive oil and Parmesan cheese. Eat like your life depends on it, because often, it does.

As we continued on our starboard tack, heading toward the East Coast of the U.S. several years ago that December, the wind shifted left to the WNW. We were able to tack for home. The forecasts implied that the winds would hold for another day and a half, after which they would drop for our final approach to Newport. In the late fall, both water and air temperatures tend to be colder in shallower waters. The deeper water retains the warmth created during the summer for a longer time. Our final 60 miles would be in relatively calm conditions as temperatures nose-dived to 16 degrees F.

Icing on deck was minimal but still potentially dangerous. The night before, prior to icing, we had conservatively set our heavy weather sails in 35-knot winds and left them there. As we motored to our final destination and tied the boat up, we accomplished the mission, sails frozen in place. The J/160 was at its new home and being refit by people happy for the work. 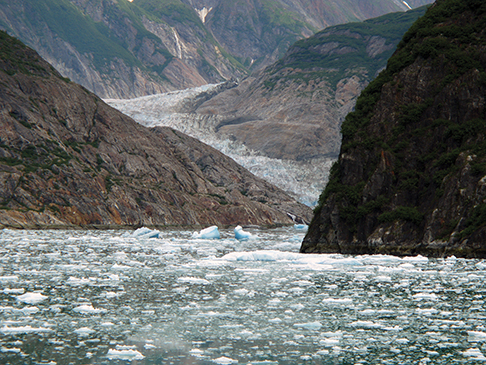 Cold weather and heavy weather sailing can provide a cruel reality—sometimes a part of life. But with attention to details, it can be safely accomplished and even enjoyed as a job well done. We all made it home in time to watch the snow storm the following day—from the comfort of a warm living room.