SSB radios are king when it comes to reliable, long-range communications. Above and beyond satellite phones, the SSB gives you the unparalleled ability to communicate to many other listeners simultaneously, requires no service contracts, and provides a wealth of information to you at no additional cost. Read on to learn why a quality SSB should be on your essential gear list, ASAP. 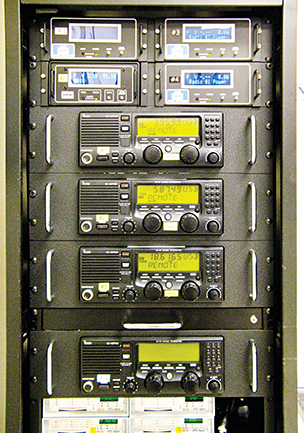 The high frequency, single sideband radio commonly nicknamed the “SSB” is perhaps one of the most useful and yet most misunderstood pieces of electronic equipment aboard a modern blue water vessel. One of the original driving factors behind the inclusion of electric batteries aboard a boat (perceived to be of higher precedence than either electric navigation lights or cabin lighting), the SSB radio has earned its prestige by enabling communications across enormous distances without the need for a network of cell towers, satellites or other devices in between. In fact, it remains the only presently reliable method for doing so.

Early SSB radios were incredibly bulky and extraordinarily finicky, requiring extensive knowledge and a high degree of tweaking in operation in order to secure an intelligible conversation. As technology improved, the need for such operator training decreased, but the reputation of unassailable complexity remained.

Of course, that has all changed radically. The introduction of PACTOR digital modems and the Sailmail radio email service, the reduction in installation complexity afforded by auto tuners and new ground planes such as the KISS-SSB radial system, and advances in user-focused, more capable, and less complex equipment all combine to make modern SSB radio extremely accessible to even the most technophobic sailor, yet even more useful in this modern Internet age.

WHY SSB?
The astute reader may be wondering what is so useful about a radio, especially when satellite phones provide fingertip contact to anyone in your phone book and data services to boot. An SSB radio is a longstanding essential item on a blue water boat for very good reason, because while SSB and satellite phones are similar in purpose, they are very different in usefulness at sea.

First and foremost, the SSB is inherently a “one to many” communications method. Broadcast on any of several common “call channels” (the equivalent of VHF 16 in many countries), and anybody around listening in will hear you—no need to have them in the phone book. The advantages this brings for safety, situational advice or local knowledge cannot be underestimated. The SSB has a range of many thousands of miles, whereas your VHF can only effectively reach just beyond your sight on a clear day. In an emergency, the satellite phone can only reach someone whose number you have—usually far away and often unable to do anything effectively. An SSB can reach out to everyone within a few thousand miles, instantly and without needing to know their number ahead of time. Much like the distress button on your VHF, an SSB DSC alert will send the bridge radios on every major vessel around into alarm mode. Best of all, you’ll alert those closest to you rather than only those furthest away. There is immense confidence and peace of mind that comes from having this level of communications easily and directly available.

In addition, SSB enables participation in cruising nets, where other cruisers in your general part of the world converse on scheduled frequencies to share information, make acquaintances, while away long passages, and generally help each other out in good camaraderie. You won’t be able to join those on a satellite phone. You don’t want to miss out on the luau at the next anchorage or the update on the shoaling at that critical pass, and the nets are one of the best ways such info is shared, especially to those still out at sea and not yet in range of the VHF chatter.

Eric Steinberg of Farallon Electronics, a longstanding source of SSB expertise and innovation, sums it up nicely:

“For ocean sailors, the ability to keep in contact with other sailors is a common use of SSB. When a boat you have been sailing with goes over the horizon, SSB is the only ‘no cost’ way to keep in contact. Since this is a common way for cruisers to keep in touch with one another, a radio community evolves. It may be as simple as four boats making the same passage, or expand to something more regimented and established—these are the cruising “nets” that exist around the world. When something is free to use, people are more likely to use it, thus the popularity of SSB for traveling cruisers. Since SSB is free to use, it often gets used a lot, which takes us back to the SSB community. Put these two together and you have a built in safety net. The other boats you are making a passage with are available for you to call in an emergency (and in a mid ocean passage may be the only ones who can get to you). But SSBs reach MUCH further. Beyond the nets, there is the entire Amateur radio community working on similar frequencies. In an emergency, sailors in distress can literally shout for help to hundreds of listeners, making SSB a basic piece of safety equipment.”

And of course SSB, when paired with a PACTOR modem and a service such as Sailmail, allows not only email access but GRIB weather data, news headlines and more. While you can get some of these things on a satellite phone, you won’t be able to use the satellite phone to tune into local NAVTEX broadcasts, catch weatherfaxes on the air, or listen to the BBC’s historically excellent shortwave news, all of which can be done with an SSB quite easily.

While we’re on the subject, let’s talk data speed for a minute. That satellite phone tops out at about 9600 bps if you’re using Iridium handsets (and an even slower 2400-4800 bps if you use Inmarsat handsets), which is the speed of some of the early phone line modems—a far cry from modern DSL. SSB radio with PACTOR isn’t necessarily any faster, but neither is it significantly slower, especially with the newer P4 Dragon modems being released this year, which, according to Eric, can outpace satellite phones in many cases. I’ll be putting the new P4 Dragon modem to the test over the next year of long-distance ocean voyaging, so stay tuned for updates on that. With the current models, the SSB takes about the same amount of time to transfer the same data in practical use, but you’re not paying for those minutes of airtime like you would be with a satellite phone.

This leads us to another great benefit of SSB for the average cruiser: beyond the initial cost of the equipment, and a small annual fee for a service such as Sailmail, there is no per-minute fee, no monthly subscription charge, and no area of the world where your coverage does not apply. Even factoring in the initial cost of the radio, modem and installation, an SSB installation typically pays for itself in about two years compared to a similarly used satellite phone, and that doesn’t even count all the great contacts you’ll make among the cruising community far and wide! 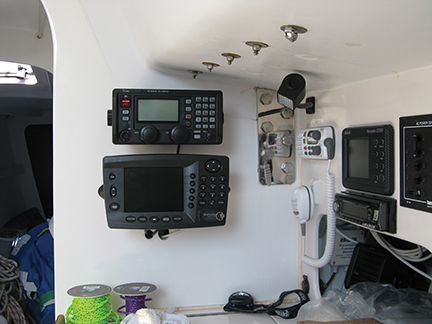 Put bluntly, a modern SSB (and from now on, that is all I am going to be talking about) is no more difficult to use than your VHF radio. It has channels you can tune it to, or you can dial in any frequency in between those channels if you wish. You aren’t limited to marine bands; you can also tune into AM shortwave bands to listen in on the news or get weather reports, weatherfax and NAVTEX (on some models).

Like a VHF, you tune the frequency you want and listen. If you are on a marine band and you want to talk, you push the button on the mic, and talk.

No, really, that’s it. It’s not any more complicated than that. Sure, it helps to know that some people are using one frequency for certain kinds of chatter and another for getting email, but you can get a guidebook like Capt. Marti Brown’s excellent Marine SSB Radio for Idi-Yachts to sort that out, much like a TV channel guide. In fact, this book is a fantastic resource on subjects such as licensing (very straightforward for US flagged vessels—two online forms and a fee each), finding the local cruiser’s net, radio etiquette and everything in between. I strongly recommend it for anyone new to SSB and wanting to get started quickly and easily.

Really, if there’s anything complicated about SSBs at all, it’s that there are more channels that you can do more with—and people are doing a lot of very worthwhile things with them. So relax, a good guide will get you started and other cruisers will quickly bring you up to speed on the rest.

Now that we’ve gotten the complexity myth out of the way, stay tuned for Part 2 in June, when we cover tips and tricks for getting an SSB humming along smoothly on your own boat.

Daniel Collins is a USCG licensed Master, an Extra class amateur radio operator, and an ASA certified sailing and navigation instructor. He will be hands-on testing a P4 Dragon modem and a KISS-SSB radial on a very unique upcoming voyage and will be writing his comments on those and much more at www.oddasea.com.