My eyes darted quickly from the slowly dropping depth meter to rocks on either side of us as we slipped into Ewing Cove on the northeast side of Sucia Island. When our depth started to increase again I made a sweeping turn to port and, just as we had hoped, not a single other boat was swinging on one of the four state park mooring buoys. Such is the joy of cruising the San Juan Islands before the bustle of summertime boaters come to make it their playground.

Later, rays of sun pierced through the clouds as I rowed to shore to find a vantage point for a few photos of Yahtzee swinging alone in the long, finger-like cove we were nested in. Interesting rock formations and panoramic views of the islands greeted me as I climbed from the water’s edge up onto a grassy clearing.

One of the many Marine State Parks in Washington, Sucia Island lies just north of Orcas Island between Patos Island to the northwest and Matia Island to the east. Many cruisers who frequent the San Juans point to Sucia as their favorite, and a spot that is not to be missed. I have even met a couple that affectionately named their dog after the island.

Shaped like a handprint with the palm being Echo Bay and the fingers being islands or long, rocky points, Sucia has plenty of space to moor or anchor: Fox Cove, Shallow Bay, Fossil Bay, Snoring Bay and Echo Bay. But pocket-sized Ewing Cove is a secluded little spot that I will always check first to see if anyone is there. 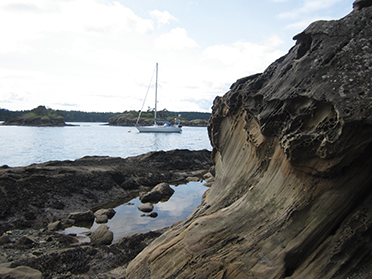 At the northwesterly head of the cove is a crescent-shaped beach that is classic Pacific Northwest; rocky, strewn with logs and driftwood at the high tide line, and fringed by tall trees that beckon to be hiked through. After enjoying time ashore on the trail system that takes you throughout the island, we lazed away the afternoon in the cockpit enjoying the sun and greeting a curious seal who popped its heads up to say hi. I guess if we had to have neighbors, he was the best kind.