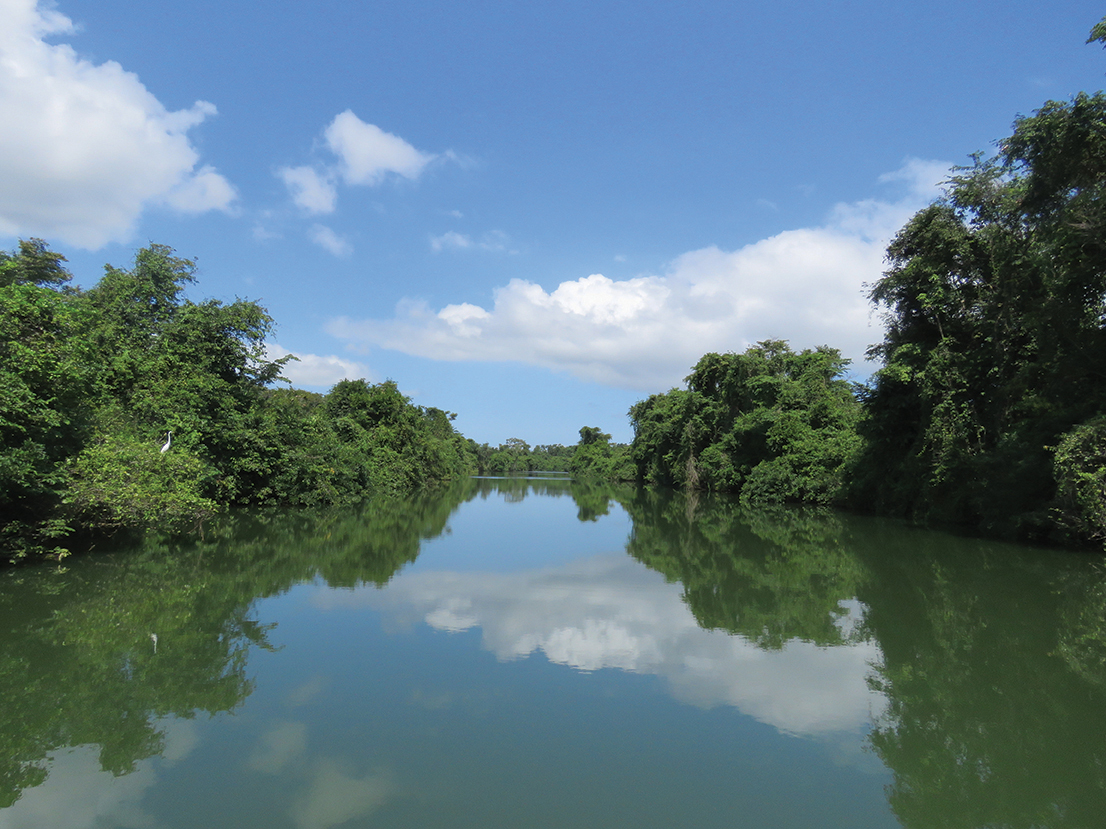 Every once in awhile, the cruising life hands you very special moments (Published August 2016)

THE RIO CHOCÓN MACHACASseem to have those special moments with Bram Van Dijk on his Hughes Columbia 40, Donna Dee. I had just crossed the Atlantic as crew on another boat and still found that a one day adventure with Bram can be more amazing than three weeks at sea. Bram has that Dutch explorer gene. He and Donna Dee were in Rio Dulce, Guatemala since I left him there almost a year ago and he had explored the many rivers, small lakes and waterfalls in the area. I like to think that he saved this one for me.

Our destination this time was the Rio Chocón Machacas, a long, winding, twisting river that feeds into the the body of water called the El Golfete halfway up the Rio Dulce. With a description from Freya Rauscher’s Cruising Guide to Belize and Mexico’s Caribbean Coast Including Guatemala’s Rio Dulce (that’s a mouthful) and using Navionics we followed the Golfete edge just southwest of the Manatee Preserve until we saw the described break in the reeds. As we entered, the river became very well defined and we turned to starboard. The river’s edge was surrounded by dense vegetation, green, lush jungle, dotted with white egrets and dusky herons. It surrounded us for the first three and a half miles. Rauscher’s guide had said to expect depths of eight to 10 feet, but we consistently measured around 20 feet plus. However, we still proceeded cautiously.

Just around five miles in we rounded a tight corner, the space around us opened into a wide savanna-like flatlands. At first there were small rudimentary corn fields tucked in here and there and then large cultivated fields. We had read of a Mayan village about five miles in. On the left side up on the rise up from the river, the thatched roof, weathered wood slatted house began to appear. Colorful laundry, chickens and dogs, and the beautiful hand carved cayucos pulled up on the bank were evident. A bit further up river more Mayan houses. These had vine covered thatch roofs that could be seen through the dense vegetation with the look of a deserted village (and might well be). We then motored around another curve to find beautiful healthy cattle grazing. Brown and white, they were accompanied by white cow birds, Cattle Egrets, that hung with the cattle as the cattle pulled and chewed the grasses leaving bugs that the birds enjoyed. As bucolic and lovely the cattle on the shore seemed, the contrast of the village and what seemed to be a thriving cattle farm represent the difficulties of a disenfranchised population.

Guatemala had suffered through over 30 years of civil war ending in 1996 with Mayans fighting to overcome brutal repression, abuse, murder and loss of land and tradition. They are economically disadvantaged, under educated, separated by 20 plus different Mayan and several Amerindian languages and are often non-Spanish speaking. Some Mayan families keep their children from public schools where Spanish would be taught for fear that their children would assimilate out of the Mayan culture and traditions. The rich and educated mestizos/ladino populations have taken advantage of the lack of finances and education that would facilitate the Mayans in accessing legal support and have been able to make misrepresented legal land acquisitions. 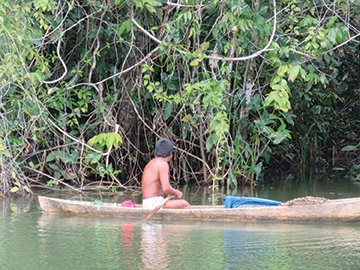 I had heard of village elders being presented documents in Spanish, encouraged to sign without full disclosure and the next thing the leaders know, they have signed a document that says that all villagers must be off of the land within a period of time. These documents were seen as legal and lawful in a court of law. The large plantations (fincas) are owned by the wealthy and produce the main export crops of coffee, sugar, bananas, cardamom and beef. Seeing the cattle on the right hand side of the river with the large fields and what look like large and lovely farms countered by the dusty Mayan houses with rusted equipment reminded me of these facts. The Mayans have little political sway and no political party representation. 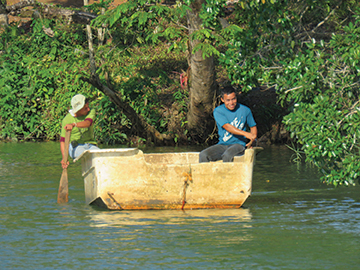 In the recent past, the owner of one of the large marinas in the Rio Dulce area manipulated millions of dollars from the Guatemalan government to clean up the polluted waters of Lake Amatitlan with “magic water” from the Dead Sea. Spending only a fraction of those millions on the project, he skipped the country with the rest. The Mayans were well aware that there was no such thing as magic water and mounted a protest that brought the deception to light. 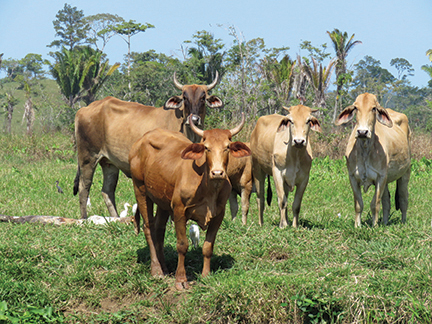 This is beautiful country with the blue of mountains in the background to the bright green of the corn fields. Just past the Mayan houses we see what seems to be a barge across the river, and it is. A flat steel barge powered by two outboards and it has a truck sitting on it waiting to cross. On the right hand side of the river, a few men gather arriving on bicycles and motorcycles to either watch or pick up the delivery. The men on the barge look at us with incredulity. To their surprise, there is a sailboat coming up the river and they pull out their cell phones to take pictures of us. We are the object out of place. I would imagine most people come up here in dinghies or launches but not with 40 foot sailboats. Bram asks if the river is navigable if we go further up. They say “sure” but still look at us with some curiosity and maybe a little disbelief. 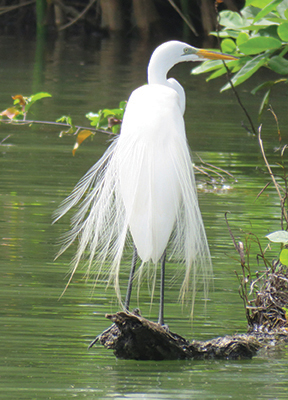 We are still in 20 feet of water, we draw five feet, three inches. We are so focused on how deep that we forget to think about how high and suddenly we hear a rustle, then a cracking and snapping. I run forward to find that we are doing a fine job of pruning an overhanging tree. Fortunately, it hit low enough not to take out the antenna. We laughed over the unexpected, but also started to pay attention as the jungle closed in on us again. The game of avoiding sunken logs and hanging branches, guiding the mast between branches giving us only about a foot of clearance, adds a new dimension to this place that no one ever goes. 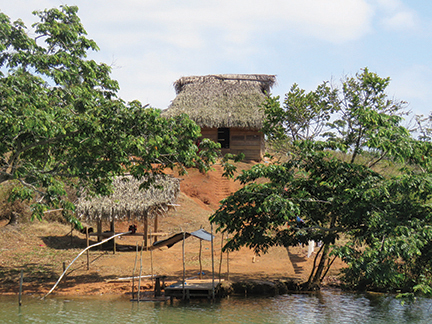 At almost nine miles up the river, Bram decides that Donna Dee had done a pretty good job of getting us this far and while we still had room to move, we turned her around. The trip back was quick and smooth, after we got through the tree branches again. It was getting late and we went much further than we expected. Several people were watching us as we got back by the village. We were the exotic thing here, not them. What surprises me is that, as jaded as Bram can be about life and people, he still loves exploring, finding the “out of the way” and going there; curious and observant but never too romantic about it. As with many places we travel, there is the backstory of politics, corruption, repression and civil strife. But for the moment and maybe just for the moment we can enjoy the beauty of a country and its people. 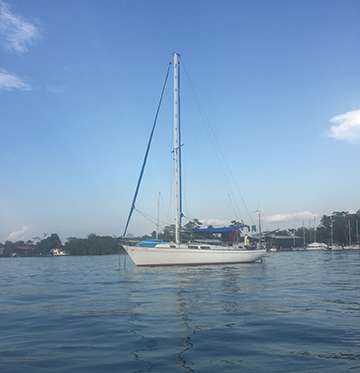 In the recent past, many organizations have supported indigenous rights and are making the effort to reestablish native knowledge based education. One such organization is Pass It On Rio Dulce whose mission is education as a way out of poverty and empowerment through sharing clean technology. Most of their volunteers are cruisers and are present at the swap meets in the Rio either at Bruno’s or Mar Marina on Sundays. Cruisers donate and install old solar panels and equipment to bring light to schools and villages that are off the grid. In the next year Pass It On will be starting the LUCI Light Project. Cruisers are encouraged to bring the popular LUCI Light with them as a donation to bring easily accessible light to students in a remote village for school and for doing homework. I can never underestimate the importance of being informed about the people and cultures we pass through. That knowledge informs all that I see. Learning more about the life of the modern day Mayan and having met so many lovely Guatemalans I learned to respect that experience. I felt that I should in someway give back. To learn more you can go to their webpage www.passitonguatemala.com. If you are going to Rio Dulce, plan to bring a LUCI Light with you to share in a brighter future.

Photographer, artist and sailor, Barbara Dahn sails her own Beneteau First 305, Outrageous, on Lake Champlain in the summer and crews with friends including Bram van Dijk on his Columbia 40, Donna Dee, in the Caribbean and anywhere else they wish to go in the winter months.

View all posts by Barbara Dahn