While racing to Bermuda, the glow of a flare arced across the sky. Now what?  (published March 2013)

Serious cruising has many faces. One skipper might choose to meander over the horizon on extended passages, while another might be more inclined towards gunkholing near the shallows to quietly have lunch while blue herons browse in knee-deep water nearby. Yet, another sailor’s cruising may include weekend anchorages with the family on a bay near home. The pace of cruising may be casual much of the time but, occasionally, there is good reason to sail hard and fast to make a landfall before dark or get the hook down before a front comes rumbling through.

So, to check out those benchmarks of performance and seamanship from time to time or to heighten your own learning curve, you might try racing offshore or joining a rally. Things learned in one sailing arena are often used in another, as I learned in one particular situation during the Marion to Bermuda Race several years ago. Sometimes those lessons relate to improved performance. Other times they pertain to safety. But, they should always be centered on good seamanship and the ancient camaraderie of the sea.

Lucky Dog was beautifully prepared and looked shipshape as we took the launch back from the Beverly Yacht Club the evening before the start of the 2009 Marion to Bermuda Race. Phil, Lucky Dog’s owner, had seen to that. Our crew had done the drills, gone to the Safety-At-Sea Seminars, spent time sailing together and everything was in place. We were ready. But some of the events that were about to unfold would place a completely new spin on things.

The pleasant breeze that blew us out of Buzzards Bay from the start off Marion, Massachusetts, soon gave way to a spell of light winds through the first night as we worked our way southeast of Nantucket. As the miles and days ticked by, the winds built, and we felt that we were reasonably well positioned within the fleet as we closed on Bermuda. Heavier weather was forecast and, if at all possible, we wanted to fetch the finish for the final 100 miles.

About a day before landfall, our plans suddenly went astray. It was the middle of the night when several of our crew spotted a flare in the sky, or what they thought was a flare. The questions began to fly. Was it really a flare? What kind of color is that for a flare, anyway? Green? That’s not a distress color!

The conversations continued. The flare not only came down, it had gone up as well. It had arced through the sky so it wasn’t just falling space junk! What do we do now? Go back? Report it to someone? To whom? There were far more questions than definitive answers. To believe or not to believe? To act or not to act? Those were the key questions. We began to formulate the answers as other boats in the race called on the VHF, indicating their own sightings and comparable questions.

A similar situation had happened to me a year earlier while on a delivery from the Caribbean to Shelter Island, New York. A green flare had been sighted by one of the crew, so we turned toward its launch point. After searching for hours, we found nothing and reported the sighting and our search to the U.S. Coast Guard in Puerto Rico. It seemed to be the only manned telephone number we could find for the Coast Guard in the issue of Reed’s Nautical Almanac, which was still published at that time. We called on our Iridium phone and within minutes, a notice was sent out by the Coast Guard and printed out on our Navtex receiver. Somebody really was watching over things.

Flares come in a variety of colors, primarily red, white and, less often, green. Red commonly indicates distress. White is often used to indicate a location; I am here! And, green is sometimes used by rescue aircraft to draw the attention of people being rescued.  Green can also indicate a submarine surfacing or that someone is safe now. But in an emergency, any color can indicate distress. They should all be treated with respect, both by user and observer.

When life-threatening emergencies occur offshore and assistance is requested, professional mariners are required to render aid. But whether it’s required or optional, all mariners — amateur as well as professional — have, at the very least, a moral obligation to render, or at a minimum, offer assistance.

As the VHF chatter discussing the flare sightings continued, I began to request vessel positions and bearings to the flare from each of the boats that had seen the light. Since we were spread around a wide area, a picture of the flare’s source began to develop.

I drew LOPs (Lines of Position) from each boat’s position to where they thought they had seen the flare. After drawing five or six LOPs, a cocked hat area on the chart indicated where the flare’s source might have been. Several of us noted our time and position, stopped racing and proceeded back towards the area. Meanwhile, several skippers on different boats called the Coast Guard to alert them to the possibility that there might be someone in distress.

While it took us several hours to get to the search area, we felt that to do otherwise would be less than responsible behavior. Imagine if it had been us or our friends sitting in a life raft, hoping for a rescue and none were to come. It wasn’t an acceptable concept.

Whether for better or worse, we found nothing to report. The next day, after we had returned to our original point of departure from the race and had continued racing, the Coast Guard sent a C-130 to continue the search. They took it seriously, and we felt that it had been incumbent on the rest of us to do the same.

As we raced on, the weather, as forecasted, continued to worsen. Stories of blown out sails and damage to boats would surface when we finally reached Bermuda. And, everyone was talking about the flare mystery.

Racing a sailboat polishes skill sets that can help us at times while cruising. Pitted against others in our class, we can learn to trim sails better. We can test our speed and agility in changing sail plans to suit evolving conditions, and we can measure our tactics against the best in the fleet. But the code of behavior should remain the same. Offshore, to one degree or another, we all depend on each other and should respect each other accordingly. 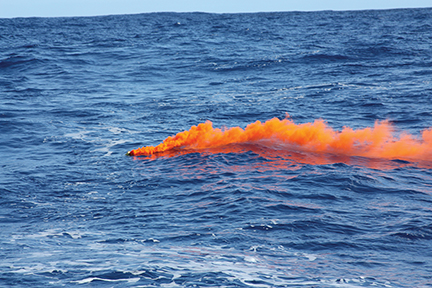 While sailing is meant to be fun, and that is usually the case, there are implied responsibilities that must be honored and obeyed whether racing or cruising.Therein lies the true value of the sport and sportsmanship. In the case of sailing, lives might well be at stake.Though rare, those situations deserve our full attention. Winning a race is what we were out there to attempt, but avoiding a disaster or saving a life could have been a trophy with real value.