When provisioning for our recent (and first) trans-Atlantic voyage on Equilibre, our Catana 381 catamaran, I did the usual due diligence by reading magazines and books and trolling the Internet for advice. The suggestions were predictable: keep it simple, think practically and avoid glass containers. Textured vegetable protein and sundry powdered foods were suggested as options with some frequency. While the above might be better than starvation, they did not appeal to me, a foodie who thinks about cooking the way a 20-year-old might think about sex—virtually all the time. I am also something of a locavore, growing much of my own food and trying to source locally-raised meats and produce as often as possible.

As we prepared for our voyage, my husband, Alec, a worrywart of the highest order, was obsessed with weight. Could I cut down on the amount of food? Would I eliminate packaging? Would I consider dehydrated/powdered food? No, sort of, and never. When I told him that I would be provisioning chiefly by canning in glass jars, his fear factor went off the charts. But there was some logic at work here: I could provision exactly the kind of food that we eat at home and bypass many steps in its preparation. Packaging would be nearly totally biodegradable, silica returning to silica as glass jars can be thrown overboard in the open sea (canning lids seem to be lined with plastic, so they got stowed in the garbage bag) or else they would be reusable. And, if the refrigerator failed, we would still be able to eat well.

Sailing a catamaran affords me relative stability, so cooking on a steep heel is not something with which I need to contend. But storage space is in short supply, as it is on any sailboat. And with a newly installed generator, water-maker and water heater under our berths, space was in even shorter supply. We do have one significant storage location: the prior owner of our vessel had ripped out the starboard aft bunk to make a shop area for himself. After artful negotiation, the shop became a pantry-cum-shop as I obtained an area for shelves of dried beans and fruit, pasta and the odd can of coconut milk. And Alec rose to the occasion by locating large plastic bins with drawers that could be wired shut to securely hold glass jars. The active bin lived on the floor of the pantry and the backups were stored atop the water tanks under the bunks and in each of the forward hatches.

As I planned menus, I thought that each bin could hold a week’s worth of home-canned meat and sauces along with multiple jars of peanut butter and jam. Mind you, two of our four crewmembers insisted that they would live on peanut butter, so I bought 15 jars of it. They ate exactly one-and-a-half of those jars between Virginia and Portugal. I am awash in the stuff, but I digress.

I stocked five bins of food that included venison cubes, ground venison, turkey slices in broth, lamb cubes and ground lamb. The meats were prepared with spices, finely chopped onions and parsley, then canned in a pressure cooker. I also packed jars of whole tomatoes along with homemade tomato sauce, salsa, ketchup, chutney and tomatillo sauce. Several large jars of oil-packed dried tomatoes formed the base for a number of salads, and jars of salt-preserved lemons provided both vitamin C and a real flavor punch to many meals.

A typical dinner involved cooking dried beans or pulses in a pressure cooker with some tomato sauce and then adding the canned meat to the cooker at the end to heat it through. For variety, I added different spices each night. I usually made rice or pasta with the meat. For as long as they lasted, fresh vegetables rounded off the meal, usually as a salad, although fresh broccoli, cauliflower, carrots, celery and onions stayed fresh in the refrigerator for weeks and became the base of great stir fries to which I added already-cooked meat. Dinner preparation never exceeded 30 minutes.

For variety, I prepared lentil stews dressed with different purchased sausages, such as chorizo. Quinoa or bulgur (cracked wheat) made a fine base for several salads, including one that involved pine nuts and dried fruits. A jar of tomato sauce with added fried bacon over pasta was a quick meal. A real bonus here was that each time I fried up bacon, pods of dolphins would swim up to the boat for a visit! The canned chopped meats formed the core of a range of lunch “pancakes” cooked with eggs, celery and onion. I brought along a huge bag of fingerling potatoes that we had picked the previous Christmas day and then promptly abandoned in the root cellar until they were discovered a week before we were leaving on our passage. The potatoes lasted until the night before we arrived in mainland Portugal and were the basis of some of the best potato pancakes I have ever tasted.

Our passage was often brutally challenging, as we encountered—in quick succession—three gales with winds up to 45 knots that brought 20-foot waves for days on end. Within a week, one engine failed permanently, the other worked intermittently, the generator packed it in, the water maker refused to make water and the Autohelm gave up the ghost. We were stressed out, freezing and often soaked to the skin even while on strict water rations, but we had a hot, freshly prepared dinner every night, with a bottle of good wine. No plonk allowed. I also made bread in a bread machine each morning so that sandwiches for lunch were fresh and tasty.

When we arrived in the Azores after some three weeks at sea, we were dirty and exhausted, but well fed. Our crewmembers agreed that they had never eaten so well, offshore or on land. Not a single glass jar had broken. More importantly, good food had provided as much nourishment for the spirit as the body.

Home-canning meats gives the cook on board great flexibility. Instead of being at the mercy of a hit-or-miss home port supermarket, one can provision gradually, as good meat becomes available. So, when turkey is fresh and abundant around Thanksgiving, or lamb is similarly available around Easter, one may can them. As good supplies of any other meat become available, they may be canned and put in storage incrementally until needed. This eliminates the frantic rush at the beginning of a passage to locate and store meat on board. Likewise, canning tomatoes and homemade tomato products in the late summer when tomatoes are abundant and tasty assures an adequate supply for a future passage. Home pressure cookers come with detailed directions regarding processing times for various meats, beans, vegetables, etc. Highly acidic, tomatoes should be canned in a hot water bath instead of a pressure cooker.
Canned meats do not require refrigeration and thus might be a good option for the many cruisers who opt to go refrigerator-free. Passagemaking with home-canned products is front-loaded with work, but the ability to serve a hot, tasty and nutritious meal even when the going gets rough at sea more than compensates the effort.

Combine ingredients except the oils in a bowl. Heat oils in a sauté pan until hot. Use a shallow ladleful or two tablespoons of mixture per pancake. Cook until lightly browned on each side. Serves four or more with bread as sandwiches.

Note: When I prepared these pancakes at sea, the meat, onions, parsley and spices were already combined in canning jars. I added more fresh onion and celery, the eggs, and salt and pepper. 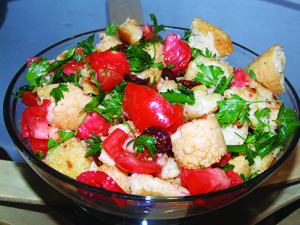 Heat the oil and butter until the latter is melted and slightly foamy. Add garlic and stir until golden, not brown. Add cubed bread and mix constantly until the bread absorbs the fats. Add more oil if pan begins to blacken at all. Cook until bread is slightly crispy. Move to a salad bowl and add dried and fresh tomatoes (if available). Add wine vinegar, salt and pepper, and only enough olive oil to coat any dry portions of bread. Don’t overdo the oil. Serves four.

View all posts by Sharon Dale