With or without electricity, as a navigator your job is to find your way safely to port. At times, your best friend may be your compass. Treat it as such.  (published April 2013)

Lia Ditton and I were delivering a boat from Antigua to Norfolk, Virginia. A week out of Antigua and in the middle of the night, the autopilot went down, so we had to hand steer.  Lia, one of the most reliable crew I’ve had the pleasure of sailing with, was all over the problem, breaking down the autopilot and trying to determine the cause of the failure while I steered.

Suddenly, the electricity went down as well. The cascading problems quickly went from bad to worse. As engineer, Lia focused on finding and resolving the problem. I drove and used my headlight as long as possible; but if we ran out of batteries, we could use the emergency Cyalume sticks to light up the compass. The trusty magnetic compass was about to become my new best friend.

That was several years ago. Of course, there are numerous types of compasses, and aboard your boat you may have an electronic fluxgate compass that provides digital input for many of your other instruments or computer programs. You certainly should have a small hand bearing compass, and almost all cruising boats have binnacle or deck mounted magnetic compasses. A good, properly positioned and adjusted binnacle compass can be a lifesaver.

CLASSIC COMPASSES
The origin of the magnetic compass is in question. Some claim that it came to the West with Marco Polo. Others say that a simple magnetic compass was known to the Greeks. Most admit that the Vikings knew about the magnetic properties of lodestone that floated a magnetized iron needle in a bowl of water to find magnetic north. Later, it was found that if the magnetized item was placed on a card, it was more stable on a pitching and heeling vessel than a simple needle. The magnetic compass was evolving. Oil has replaced water in the bowl. Bar magnets have been added to compensate for local magnetic deviation found aboard the boat, and lights have been added to help the helmsman at night.

When envisioning the magnetic field surrounding the Earth, we are often led to think of a bar magnet thrust through the center of the Earth and inclined at about 11 degrees to the Earth’s rotational axis. One end of the “bar magnet” extends to a point somewhat off the North Pole—in the vicinity of 78.9 degrees N and 103.8 degrees W, to be more precise. The other end of the “bar magnet” is somewhat off the South Pole —near 65.4 degrees S and 139.5 degrees E. The magnetic field splays out from these poles around the world in all directions. That, however, is not a completely accurate analogy.

Some compasses require more or less adjustment than others. As an example, most of the Suunto line of marine compasses are adjusted to one of five geographic zones.  Before you purchase a compass you should define the area in which it will be used. The only exception is the Suunto Series 135 and 165 compasses whose cards remain perpetually balanced no matter what part of the world they are used, except when extremely close to the magnetic pole.

In the late 1980s, during voyages I made into the deep Southern Ocean, we were painfully aware of the dip angle and slow response time of the compass card as we rocketed down the face of 50 foot waves while the compass took it’s time conveying our heading.

Traditional magnetic compasses are great for many applications, and they have some benefits over newer types of compasses. One of the primary advantages is that it doesn’t require electricity to work. Even if you are unable to illuminate the compass lights due to an electrical failure, you can still tape a flashlight or Cyalume stick to the compass and read it at night. But for all of the digital instruments and equipment onboard, you will require another type of compass. Most commonly, that will be a fluxgate compass. 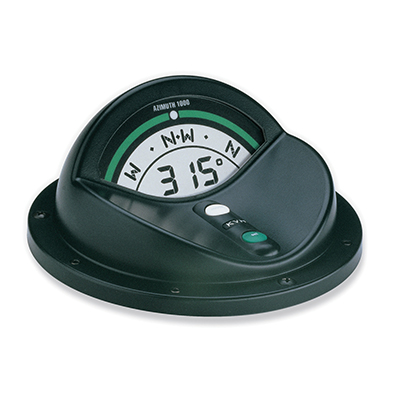 The more recently designed fluxgate compass has become popular and is found on many small vessels. Developed during World War II for aircraft, it is dependent upon electrical power. The fluxgate compass is significantly different from the standard magnetic compass. It uses a magnetometer, a donut-shaped core wrapped with wire, similar to one bank of a transformer, which converts the Earth’s magnetism to electricity.

Magnetometers float in liquid and are sometimes encased to cancel out deviation. The magnetometer orients itself to the Earth’s magnetic field and creates a measurable current that can be translated into a digital readout. They must be calibrated, a relatively simple process wherein internal microprocessors compensate for deviation. They can sometimes be set, again using the microprocessors, to factor in local variation so they always read true.

Like the traditional magnetic compass, care must be given to ensure that magnetically charged items are not placed in the immediate vicinity of the fluxgate compass. I’ve been aboard a boat that had its fluxgate compass in a locker, and when the medicine kit was placed in the same locker, our course reading was thrown off by about 70 degrees.   Anything with speakers, magnetic coils or other magnetic items must be kept clear of the compasses. Given the fact that the working parts of the fluxgate are usually kept in a remote area under a seat or in a locker, it’s easy to forget where the actual compass is located. It’s not at the digital display head. As a result, it’s a good idea to clearly mark the compass location and make sure that nothing magnetic is stowed too close.

GYRO COMPASSES
With all of the increasingly sophisticated electronic equipment aboard modern sailing vessels, accuracy and speed becomes an issue. In the past, gyro-compasses have not only been expensive, but they have also consumed a great deal of electricity to keep them running. Gyro-compasses have been around since the early 1900s and were initially developed by Elmer Sperry in the U.S., and across the Atlantic using a different approach by Anschutz in Germany. About 20 years ago, KVH made a magnetically stabilized “gyro” compass for small craft such as sailboats. Whether it’s the digital display on the mast or the autopilot, most digital heading data is still provided to yachts from a fluxgate compass.

In earlier times, gyros consumed too much power to make them practical aboard a yacht. B&G’s model, however, uses only about 1.5 amps to keep the gyro spinning and the compass accurate in all conditions. The stabilized compass aboard some long distance passagemakers is sometimes used to keep the satellite communications antenna pointed toward the satellite even in a heavy seaway. But since the gyro requires relatively little power, it can be set up to provide the primary digital heading information as well.

Like all instruments, gyros also require checking by the prudent navigator. One such case is on record of a ship with an error that went undetected for 12 hours. The ship went aground as it steamed 110 degrees off course and was found to be 200 miles off course. It’s not likely that the traditional magnetic binnacle steering compass will be on the way out of fashion, and one can serve to check the other.

SWINGING THE COMPASSES
In some cases, checking the compass may just be a quick observation to insure that you are not 110 degrees off course. In other cases, as you prepare for a long passage or your annual re-launch, you may want to have your compass checked by a qualified compass adjuster. The adjuster will ensure that the compass is properly compensated and has an accurate deviation card.

You can check your own compasses by noting the bearings of the sun or various celestial bodies and comparing those bearings to published amplitudes. I often check the location and bearing of Polaris as I start a night watch. Other celestial bodies, closer to the horizon, may be more accurate because you may be able to directly sight them over the compass’ lubber line when they are near the horizon. But, since Polaris is always located near true north, the need to check publications is eliminated. Alternatively, as Orion rises, one of the stars in its belt is located directly east.

Another precise way to check your compass is to line up range markers that are indicated on a marine chart and compare the published range with the bearing indicated on the binnacle compass. Using two known points located on land, such as range markers, limits the possibility of errors. Because a compass’ error varies with the vessel’s heading, corrections, even when using shore-based land references, must be monitored on a variety of headings to be accurate.

Compasses can and should be precise instruments. Their accuracy has come a long way as they have become increasingly sophisticated. Modern compasses are now capable of being accurate to less than one degree if we calibrate them appropriately. If there’s a power failure, the magnetic compass is a reassuring asset that can get you safely to the next port. But with advances in electronics, fluxgates and stabilized compasses are making significant strides forward. They have certainly come a long way from the needle piercing a cork, floating in a bowl of water.