My wife Virginia and I left Punta Gorda, Florida on our 45’ Hunter Passage 450 Honeymoon Forever in February of this year to begin our multi-year cruise. With no particular destination in mind except to follow the weather, have fun, and be safe. I do not mean we would just meander aimlessly, we knew that for the first few years we would work our way through the Bahamas, Turks and Caicos, Dominican Republic, Puerto Rico and The Virgins (US and BVI). So after several months in the Bahamas a plan took place. We were anchored off Stocking Island, Georgetown, Bahamas on a beautiful sun drenched afternoon, after a delicious lunch at Chat N Chill when she proposed this plan. Virginia and I would fly to Florida, check on our properties and business and then she would fly to Brazil and I would fly back to Georgetown with Gary Howman, our dear friend and fellow sailor. Gary and I would move the vessel as far south as weather windows would allow us.

Upon arrival in Georgetown Gary and I picked up a rental car, knowing that we would need it for provisioning and other purposes. The boat was at Emerald Bay Marina until we departed on May 9th and headed only 13 miles down the sea road to Stocking Island where we planned on anchoring off of Chat N Chill. We had a few days of southeasterlys blow pretty steady so it was far better to hang out here than the marina. We arrived just in time for lunch and some cold ones —so we set up the dinghy and headed to shore. We were only anchored about 100 yards from the shore in 18 feet of crystal clear water with a good holding sandy bottom, it does not get much easier than that.
I introduced Gary to everyone there, AJ, Kwanza, Kendra and JB then we settled right in and enjoyed the best Conch Burgers in the Bahamas washed down with some cold Kaliks. After lunch we hung out on the beach, played with the stingrays, swam and snorkeled.

Five days later, what appeared to be a calm morning soon turned to headwinds running 18 – 24 mph. We motorsailed for our departure. As we came through the pass, Gary noticed the temperature gauge was creeping up so we took her off the wind and shut down the motor.  I found a broken hose clamp on the water pump. After replacing that, I refilled the cooling system and we were back on course and fought headwinds for the next six hours. We arrived in Thomson Bay and went in search of lunch. We made our way down the road to a nice little place up on the hill called Sou’ Side Bar and Grill for a delicious fish burger and some cold Kaliks.

On May 14th the day was already shining brightly and so were we in anticipation of a short but fun sail 24 miles north to Santa Maria. We departed at 0800 and were not disappointed with winds blowing steady from the southeast. We clipped along at eight point three knots and reached our destination in a few short hours. Calabash Bay is shallow  but has some very good portions of deep sandy spots  ideal for anchoring. On the northwest end of it, surrounded by beautiful clear water and white sand beaches, is the Santa Maria Resort which is very secluded, quiet and private.

Two day later, we were up early and getting the vessel ready for what would be a long day heading southeast directly into the winds and waves down the east side of Long Island. The trip took us a little over eight hours of steady 24 to 27 mph winds with the occasional gusts up to 30 with four to eight foot seas depending on the stretch we were on. It was a wet and wild ride for sure.

We arrived in Clarence Town, dropped a hook in the middle of the very well protected harbor and set up the dinghy as we knew we would be here for at least a few days. We had a few maintenance issues to address on the vessel: troubleshoot the wind generator, check all hoses and clamps for wear and clean all strainers. The following morning we rented a car and headed to the north end of the island to the chandlery where I purchased new batteries, fuel lines and a new water separator. Thank you Seafarer Marine Hardware!

On Friday May 22 it was time to leave Clarence Town. We took some time to fish and shortly after 1100 hours we heard that wonderful sound of line peeling off the reel. Gary took the helm and slowed the vessel while I got the pole out of the rod holder. As I grabbed the pole, I turned to him and said “It’s a tuna!” I could tell because I have caught many of them and they dive. This one dove hard and fast! In no time at all it peeled off two thirds of the line on my reel. I  worked like mad to find a balance between tightening up the drag and gaining some purchase on the line to reel it in. The minutes ticked by as I fought this beast; every muscle in my upper body  screamed “Give me a break!.”

Half an hour later later I got the fish within 10 feet of the vessel and we could now see its size. It was a monster Yellowfin Tuna. Once we had it gaffed and out of the water I literally wrapped my entire upper body around him in a bear hug—I was not losing this fish. He came in weighing a little over 70 pounds. I had never caught a fish (other than shark) that compared to it. I took a moment to thank the fish for his sacrifice and to thank God for his bounty. I was in a state of euphoria grinning like an idiot, and coated head to toe in fish slime and blood. We popped a couple of cold ones to celebrate and I stepped back to the transom and washed off while Gary brought the vessel back on course. 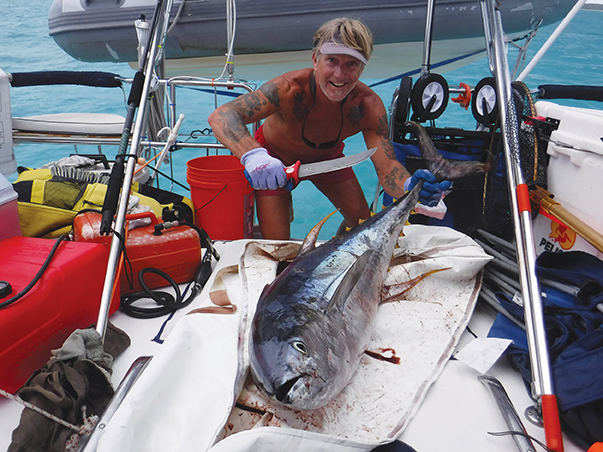 We made our way to Abrahams Bay, Mayaguana where we dropped and set the hook. I mentally prepared myself to clean, steak out and filet the tuna. During the cleaning process, I discarded all waste overboard. In no time at all we had a fan club of hungry sharks and rays competing for the tasty morsels time. During this process, we sliced off some prime pieces, rinsed them off with salt water, splashing a bit of lime on them and eat some of the freshest ahi sashimi imaginable.  Once that task of cleaning the aft deck was completed, I took about a pound of the chunks and sprinkled them with Hogs Breath Blackened Seasoning then tossed them in a skillet. We sat in the cockpit enjoying this treat washing it all down with a couple of cold Kaliks. Ah, the cruising life is for me!

Sunday May 24 about 10 miles out of Sandborn Channel we hailed TCI Radio/Radar Control and they went through their information requirements for vessels coming in and out of TCI. It was a pretty thorough process conducted entirely by radio and is designed in conjunction with the USCG to be able to respond to you and your vessel in case of an emergency. We made our way to Sapodilla Bay where we dropped the hook and headed to customs to clear in. Later on, Gary reminded me that his three weeks vacation time were just about up and he must fly back home at the end of the week so I contacted Bob Pratt and we moved the vessel to his South Side Marina. It is here I  based myself until my lovely wife Virginia flew back to continue our journey. It is also from here that Gary could make his return flight plans.

Gary and I spent the next few days getting Honeymoon Forever cleaned up inside and out. We explored the area close by, spent time with other cruisers, went to Bob’s Bar for sun-downers each evening and partook in a Pot Luck at Bob’s on Wednesday for which I made seasoned tuna bites with a rice dish. The days flew by and soon it was Thursday morning 0500 May 28th. Gary was up anticipating his flight back home. And so Gary’s vacation, education, exploration and visitation aboard  Honeymoon Forever came to an end. Thanks Gary I enjoyed the time immensely; let’s do it again sometime.

View all posts by Robert Scott