Watch systems don’t need to be as abrupt as Marine Corps Drill Instructors would have you believe. But they do need forethought and structure  (published September 2018)

As you leave the dock and head out to sea, everyone is thrilled to be underway. Enthusiasm runs high. The excitement continues through the afternoon and into the evening as the crew anticipates the warmer climate and sun-drenched beaches a couple of thousand miles and less than two weeks away. By midnight everyone is getting tired, and keeping eyes open in shipping lanes is getting difficult. Thoughts of a watch schedule, a little overdue, begin to have a visceral relevance.

Presumably, you think farther ahead than that. Considering what kind of watch system options seem most appropriate, I first consider what kind of sailing I’m involved in for a particular trip. Will this trip be a cruise with friends, a delivery, racing with a full crew, or will the passage be double-handed or even single-handed. In any case, I want the watch to be alert, especially at night and when crossing areas with heavier than usual shipping or fishing traffic. Early planning combined with a disciplined approach to sleep can go a long way to avoiding mistakes or problems while also keeping crew in top form to deal with whatever may develop during the trip.

Watch systems are often a matter of personal preference as well as a strong consideration of the available “talent pool”. An open discussion about how to structure the watches is probably a good first step in getting everyone’s opinion. Once decided by the skipper, however, that is the system that should be adhered to. If necessary, modifications can be put in place if changes occur, such as extreme weather. 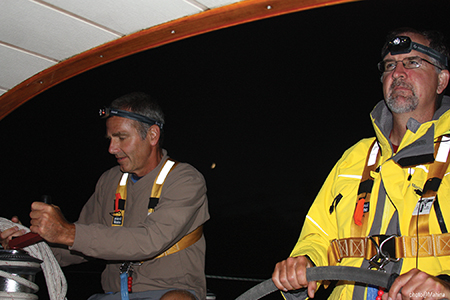 Each watch should have a rough balance of talent. For example, each watch should have a primary helmsman, bowman, trimmer and someone responsible for the navigation. In shorthanded situations, that may be the same person of course. Additional assistance may be required from the off watch, but each watch should be moderately self-sufficient to minimize the number of times the off watch is called into action when they should be resting. When sailing with a total of three, four or five people onboard, some thought will need to be given to which crewmembers are capable of standing their own watches and which crew might benefit from some additional assistance.

While cruising or doing deliveries, I often favor a three-watch system of three hours on and six hours off. Often there are only three of us onboard but all are capable of standing our own watches. If additional assistance is needed for a sail change or other operation, the on watch would call the previous on watch – the crewmember who most recently went off watch. They are presumably the most familiar with the situation and may still be somewhat alert.

When racing long distances with a full crew, I usually prefer a two-watch system that stands four-hour watches at night and 6 hour watches during the day. Watch changes take place at 0800, 1400, 2000, 0000, and 0400. That system, however, presents a potential problem when dealing with heavy weather situations. The oncoming watch is unfamiliar with how the boat is behaving in the extreme conditions, and they are immediately expected to come on watch from a deep sleep and drive the boat – sometimes on a dark, cloudy night. It can be difficult.

A modification to the two-watch system is to break each watch in half and have a “half watch” report for watch, halfway to the usual watch change (1100, 1700, 2200, 0200). Offsetting half of the each watch, allows for the “newcomers” to acclimate to the conditions before driving or other critical tasks, while the people who have been up for half of the watch already slip into the active roles on deck.

Another way to minimize the difficulty is to run a three-watch system for distance races or while cruising with three to five crew, having an on watch, standby watch, and an off watch. If conditions are particularly difficult, the oncoming watch may be coming up from being completely off watch, however, so everyone should know and understand the process. They will need to be awake and ready to take over. While cruising, having an experienced person standing by for a less experienced crewmember can help increase the confidence of the on watch, while having knowledgeable resources ready, willing and able to help clarify a situation or avoid a problem. 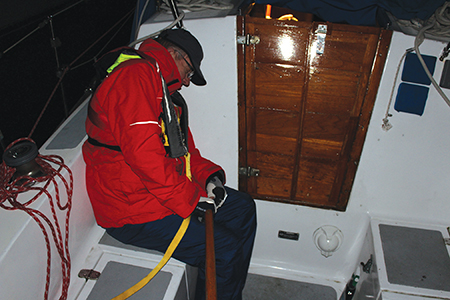 Occasionally, I hear about watches that are essentially individual relays between paired crewmembers. When one bowman is tired, he makes sure his relief bowman is up and on the job. When that person gets tired, he gets his “other half” up to take over his responsibilities. Personally, I’m not enthusiastic about that type of individual system. While it relies on a high degree of individual responsibility, often the watch captain loses track of who is supposed to be on deck and responsible for particular tasks. It can easily result in chaos rather than a clear understanding and completion of the necessary tasks to run a boat in a variety of conditions.

It should be clear that everyone on board relies on the on watch to safely run the boat. Lives could depend on it. Meanwhile, the primary duty of the off watch is to rest and be ready to go back on watch when it’s their turn. If someone is acting as a standby watch, the on duty watch keeper should feel totally comfortable to get the stand by watch up for whatever questions or situations come up.

Situations may arise when questions need to be answered, and a little help can go a long way to avoiding more critical problems. In those situations, getting someone up from the off or standby watch should be done early. For example, if, during the night, another vessel is approaching and it’s difficult to tell whether or not they will pass ahead or astern, getting another knowledgeable opinion from the off watch crewmember, taking bearings on the approaching vessel, and discussing the situation early can help to avoid problems and minimize confusion. Everyone benefits, and anxiety is minimized.

The objective is to maintain and maximize awareness. With smaller crews, that can be a bit of a juggling act at times if weather conditions degenerate or problems develop. While double-handing, each crew needs to be aware of not only their own physical condition, but also that of the other crewmember. You depend on each other. It’s important that neither of you get too exhausted to be useful in adverse conditions. There may be times when the one who has had a particularly difficult series of watches needs a little extra rest, and the rested crewmember should be observant enough to offer the help.

Ultimately, good watches are built on trust, reliability, timeliness, taking care of each other and mutual respect. They are all interrelated elements and all important. How the time is parsed is almost a secondary consideration if the other elements are in place. The timing of the watches is only important within the context of helping everyone achieve the best they can. Overall, when the crew is rested there will be better crew attitude, fewer mistakes, and more aggressive problem solving or sail changes. It’s in everyone’s interest to have a well-rested crew. 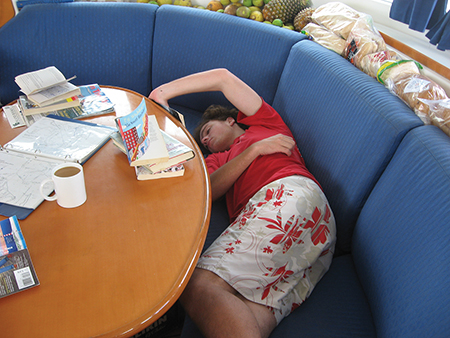 Generally, the on watch should wake the off watch. It shouldn’t require the less-than-subtle solicitations of a Marine Corps Drill Instructor to get them up. The next watch should be awake in a timely manner. perhaps 15 or 20 minutes before they are due to be up on watch. The time may be a bit longer if the weather is cold or conditions extreme. If the on watch not only awakens the next watch but also gets coffee or hot water ready, the whole process is speeded along and the new watch has a chance to familiarize itself with the situation in a friendly rather than abrupt environment. A little politeness goes a long way in building teamwork and friendships.

Diet, exercise and training also help to reduce our dependence on sleep. Quite a few years ago, I completed a single-handed transatlantic passage from Plymouth, England to Newport, RI. During the passage I ate a modified macrobiotic diet that essentially eliminated sugar, chocolate, coffee, dairy products, red meat and other foods that required a great deal of energy to digest. The result was that I required much less sleep than I normally needed. By starting the dietary regimen several weeks prior to that transatlantic crossing, my body was used to maintaining an even energy level, and if I needed to be especially aware or awake in a difficult situation, coffee was at hand if I needed it. The objective is to maintain an awareness of your surroundings the best that you can.

In addition to doing a wide variety of sailing myself, I also help others in those pursuits. When routing vessels from shore, I often remind short-handed sailors days in advance, to get extra sleep prior to approaching Georges Bank, shipping lanes or other areas of heavy fishing or commercial traffic around the world. Having a practical watch schedule that is adhered to and respects the needs of the off watch to get rest should rank high on a list of offshore priorities. Being able to modify that schedule to suit a particular situation, however, can increase its utility. 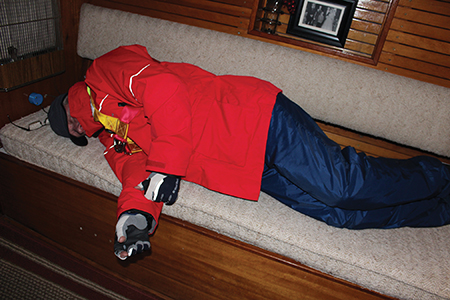 Further modifications may also be necessary for people working outside of the watch system such as navigators. Several years ago I participated in a transatlantic race, during which I was the navigator. The event was particularly competitive and had plenty of hurdles to be overcome – negotiating the Gulf Stream, racing into a North Atlantic storm, riding it as long as we could and dealing with currents and low pressure systems around the northern tip of Scotland to name only a few. Wanting to stay on top of the evolving situation and collect all of the available incoming information, I slept about 1 to 2 hours per day and occasionally a bit more. It was hardly enough for a protracted period of time. Had the race lasted much longer than 12 days, the probability of making mistakes would have only increased. Lack of sleep has the potential to turn a desire to be constantly aware into a disaster. Fortunately, I pushed myself up to my limits but was not required to go beyond.

Sleep is a critical element in making safe and efficient decisions. Not only is a well-rested crew safer and more efficient, it is generally happier and more congenial. There are a variety of watch systems, any of which can work in a particular situation. Make the time to rest. You’ll find that it’s not in conflict with your goals but a way to help facilitate them.

Bill Biewenga has sailed more then 400,000 miles offshore while racing, cruising and delivering sailboats all over the world. He lives on Cape Cod, MA.