To be truly self-sufficient, a cruising boat needs to use solar, wind and water energy to top up the battery bank  (published November 2016)

In the first leg of our five year circumnavigation, we sailed and cruised from the East Coast of the U.S. to New Zealand via the Panama Canal and the South Pacific Ocean. We were underway for 14 months and during that time we were in marinas and hooked up to shore power for only 20 nights. That’s all. The rest of the time was spent lying to our own anchors, which meant that we had to be entirely self-sufficient. 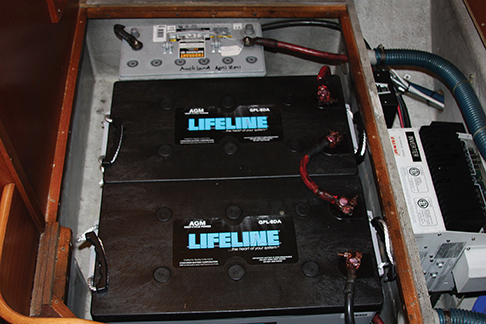 We had upgraded to a 120-amp, high output alternator and three 4D wet cell batteries in the house bank that gave us about 600 amp hours of capacity. As long as we could run the engine for an hour or two every other day, we were fine. As a back-up and to run power tools, we carried a 1000-watt portable generator that saved some wear and tear on the main engine.

This was a while ago and before the green technology so prevalent today was common on cruising boats. While our system worked, particularly because we also had engine driven refrigeration, it did eventually damage the main engine. Running the motor at anchor and in neutral did not create enough heat so the cylinders eventually coked up and wore out the rings and wet sleeve liners. At 6,000 hours, we had to have the engine rebuilt.

There had to be a better way to charge the batteries and keep the fridge cold. And there is. Modern green technology.

The technology that goes into solar panels today is much more sophisticated than it was 20 years ago when the green revolution on cruising boats was just beginning. Not long ago, solar panels needed to have full sun on them with no shadows to provide maximum output. That meant that a shade line from the side stays, topping lift or the boom across a panel would reduce output by half or more.

Today, solar panels are both more efficient and more durable. There are two basic types of panels out there, crystalline and thin film. Crystaline panels are either rigid and mounted in a fixed frame or semi-flexible and enclosed in a durable plastic; these are the most common types found on cruising boats. Thin film panels have lower outputs and are most often used for simple battery maintenance instead of a source of power for the whole boat.

Where you mount the panel or panels will determine just how much juice you will get from them. Modern panels do not have to face the sunlight directly and will work when rays hit them at fairly steep angles—morning and evening. That said, they all work better when the sun is high and the cells are all fully exposed.

On large catamarans, you often see arrays of panels on the hard top above the cockpit. There is so much surface area here that you can build a system that will make the boat completely self sufficient from solar power alone.

On monohulls, space to mount panels can be at more of a premium. The top of a bimini or on a bracket built in to the top of dinghy davits are two of the best places to mount a small array. In both installations, the panels will be mostly in direct sunlight and out of the way. On smaller boats, you will see panels mounted on the lifelines on both sides of the cockpit where they can be folded away when not in use. Or, you can use semi-flexible panels that can be easily attached to the top of a dodger. 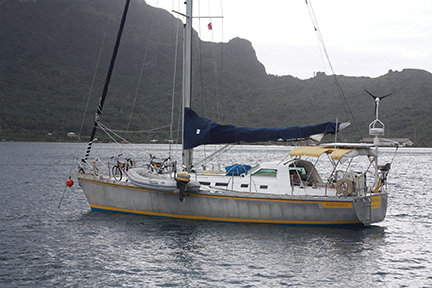 Wind generators have become increasingly popular on cruising boats that are headed to the Caribbean or out and about around the world in the trade winds where steady breezes offer a constant source of free electricity. Not all wind generators are created equal and there are trade-offs to weigh as you consider the various models out there.

Most cruisers choose fixed mounted wind generators, usually mounted on a pole or poles on the transom where they are out of the way but accessible for maintenance. But, there are models that do not need to be fixed in place and are, instead, deployed on halyards and lanyards above the fore deck when the boat is moored or at anchor. Some of these types will also double as water generators when underway.

You can choose between large units that have two or three blades and offer the highest output or smaller multi-blade units that offer less output. The larger units tend to be noisier than the small units and change the look of your boat more dramatically. Smaller units tend to start generating small amounts of electricity in light winds and will peak out when the wind gets about 15 or 20 knots or so. Large units will need more wind to get started, as a rule, and their output will increase fairly dramatically as the wind speed builds. Large units have feathering devices that allow them to continue working in quite strong winds.

Some units have built-in regulators while the better units have their regulators mounted separately below decks where they are protected from the weather. In general, wind generators with internal regulators have proven to be less reliable.

The downside of equipping your boat with a wind generator is the noise they can create, which can be annoying for you and your crew and for boats that are anchored near you. It is important that a wind generator be equipped with a positive breaking system so you can shut it down when noise is an issue. 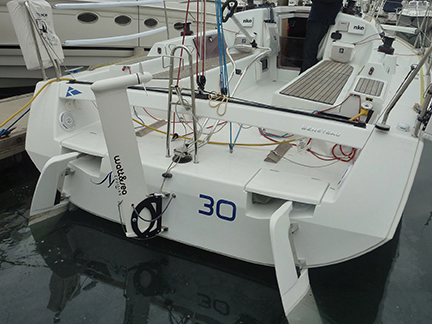 The movement of the boat through the water at speeds above four knots creates a flow along or aft of the hull that is ready made to spin a propeller attached to a generator. In the simplest configuration, a water generator is nothing more than a propeller on a short shaft that is attached to a generator mounted on the boat’s stern via a stiff line or cable. Even at fairly slow speeds, this type of generator will help to keep your battery bank topped up and everything onboard running smoothly.

On the con side, a towed device will slow you down a bit and it can be attractive to sharks, which have been known to go after them. Plus, it is hard to retrieve a towed device without more or less stopping the boat.

The water generator concept got a modern upgrade recently with the development of a generator that is built into a fold-down leg or rudder on the transom with the propeller attached and the generator built into the housing. Much easier to deploy and retrieve than a towed devise, the new units simply fold down when in use and fold up out of the water when stowed.

Several offshore sailors have experimented with using multiple fold down water generators as their sole source of electricity while on passage. The results have been mostly good, but the conclusion has been that a water generator should be considered part of a generating system with both solar and wind in the mix. 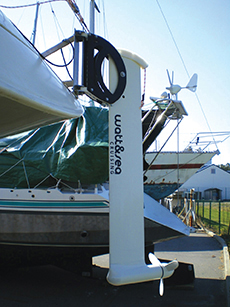 With several ways to generate electricity aboard a cruising boat, it is important to both monitor the effectiveness of each individual system and to isolate each from the other. You don’t want the power from a high-output alternator to flow back into the guts of a wind or water generator, or the charge in your battery back to flow back into a solar panel. Lots of things can go wrong, including a fire aboard.

Be sure to wire in the appropriate diodes and regulators for each unit and then run them through individual switches so one or all can be turned off. Use large enough gauge wire to reduce resistance and make sure all connectors are attached securely and made waterproof.

Green energy afloat is the way to make your boat self-sufficient when away from the dock and to give you the peace of mind of knowing that even if the main engine quits, you will have a way to keep the battery bank fully charged.