The U.S. Customs official, bristling with guns and communications equipment, had just asked us if we were aware it was illegal for U.S. citizens to visit or do business in Cuba. I had done a lot of homework on the subject to confirm we were in the right, so was it actually possible we could be denied re-entry into the United States? Or be fined up to $50,000? 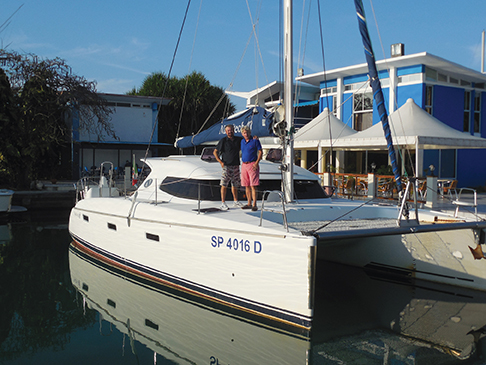 Friends of clients of mine in Italy (I am a sailing instructor/yacht broker based in South Florida) had asked me to bring their Nautitech 42-foot catamaran from Havana, Cuba to Miami, Florida. The vessel was booked on Dockwise Transport for shipment to Genoa, Italy from Palm Beach, and I delighted in the opportunity to visit Cuba before delivering the boat back to the States.

Over the years, I have often been asked about a possible voyage from Miami to Cuba, and always replied that while the prospect of visiting Cuba was intriguing, the actual passage was less than enticing. Due to adverse current in the Straits of Florida and likely wind against current with the prevailing southeasterly wind direction, it can be tricky. But always at the back of my mind was the mouthwatering prospect of a Havana to Miami voyage, with an exotic layover in Havana where I could sample the forbidden delights of a Cuba locked in the 1950s, followed by an agreeable passage back to Miami.

The reality turned out rather differently. Aware of the fractious U.S.-Cuba relationship politically, I had exhaustively researched (so I thought) the laws governing the USA’s requirements for U.S. citizens visiting Cuba. After long conversations with Customs and Border Patrol, and the Treasury Department in Washington DC, it seemed that since we had no financial dealings with the Cuban government (the yacht owners paid for our airfares and all expenses incurred in Cuba) then we would be in compliance with U.S. law. The actual law is the 1925 Treasury Act that forbids U.S. citizens from having financial dealings with the “enemy.” In certain circumstances, it is possible to apply for permits to travel to Cuba (e.g. education, religious purposes, etc), but our time constraints did not give us that option.

HAVANA BOUND
My longtime sailing friend Ken accompanied me on the trip and we arrived at a hot and humid Havana Airport where we were met by our friends in the obligatory mid-1950s Chevrolet. The drive along the tree lined Avenue des Ambassadeurs was fragrant with smoke from the legions of pre-1960 American vehicles as we cruised past crumbling mansions once inhabited by international embassies. 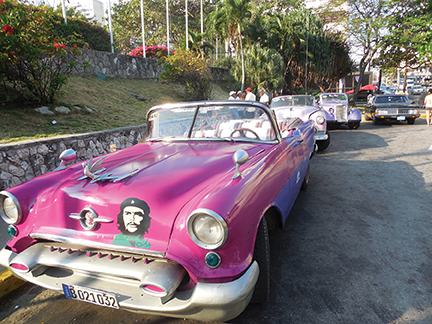 Upon arrival at Marina Hemingway, I worked meticulously on the pre-sail checklist and came up with more than a few equipment deficiencies on the 2008 catamaran. No working windlass and a very rusty chain, no GPS—fortunately we had brought our own units—and most seriously, no working VHF. This meant no communications with traffic in the sometimes-crowded Straits of Florida. So we figured we could just go to the local chandlery and buy a portable. This was a problem. Cuba has very strict controls on communication equipment, and there was no way we could solve this particular challenge without a significant delay and additional expense.

That evening, we were entertained at a very good state-run restaurant. Bright and colorful, it was a big favorite with the locals. In the evening, Cuba, and even Havana away from the main thoroughfares, is a remarkably dark place, and it seemed the 6-volt lighting systems on some of the cars didn’t help much.

We returned to Marina Hemingway for after dinner Cuba Libres (rum and cokes), where we admired the pictures from the club’s illustrious history depicting Papa Castro, Ernest Hemingway and others experiencing the renowned sport fishing waters surrounding Cuba. Hundreds of yacht club burgees adorned the ceilings as well as a plaque commemorating the 1998 St. Petersburg to Havana Yacht Race (Havana Cup), which I competed in. 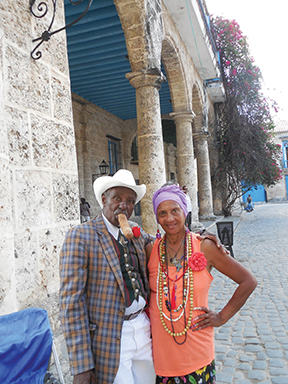 A sticky, air-condition-less night saw us up early for provisioning and completion of the necessary departure formalities. I took this as an opportunity to go on a photo tour of Old Havana—a charming series of squares and 19th century apartment buildings as well as visits to the famed Hotel Nacional and Boulevard Malecon.

I would have loved to spend an evening in this exotic environment, but our itinerary only allowed us an 18-hour layover, so we got underway for fueling and final preparations.

NORTH TO MIAMI
Upon departure from the inlet in mid-afternoon, we motorsailed north in fickle winds, making good progress on a north by northeast heading. By midnight the skies to the southwest were illuminated by lightning, soon to be followed by violent storms and winds from every quarter. On this particular yacht the helm stations are exposed to weather far aft on each hull, so we were grateful for the protection of the saloon while a reliable autopilot kept us on course.

After a bumpy few hours we were finally approaching the outer barrier reef of the middle Florida Keys. I always like to have good visibility when we are entering through a reef, and dawn did not come too early for us. We raced to get to a protected anchorage before the weather deteriorated again. Fortunately, by then the wind had settled into a Force 6 from the southwest and we had a fast broad reach up to the anchorage just south of the Key Largo canal entrance.

The forecast was for gale force winds from the northwest through the night, and we watched in awe as the surrounding palm trees were blown sideways in the howling wind. Thankfully, the anchor, with rust-encrusted chain, held us safely in place. Since the power windlass was inoperable, I was glad I had taken the precaution of buying additional pairs of work gloves in Havana.

As expected, the following morning we had to endure very fresh north-northeast winds as we slogged north in the Hawk Channel and we chose to anchor that night at Pumpkin Key, rather than face a mauling in the Gulf Stream. 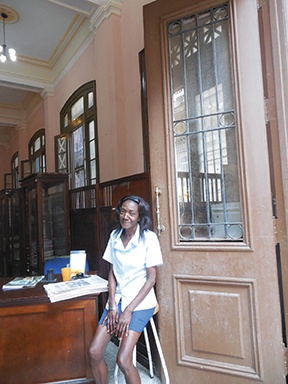 Our final day was picture perfect with fresh easterly winds giving us 11 to 13 knots of speed under full sail for an early arrival into Bayside Marina in Miami. We literally squeezed into our slip for a full wash down in preparation for our clearing in procedure. I called into Small Vessel Clearing in Miami and we made our way to the Customs and Border Patrol office in the Port of Miami. The officers were actually very helpful and professional after reprimanding us for our ignorance of the rules governing U.S. citizens visiting Cuba. These requirements occupy many hundreds of pages embodied in no less than three acts of Congress. In the end, I’m glad I had done my homework.

Captain Tony Wall is a professional sailing instructor and licensed yacht broker based in Miami, Florida. He is an accomplished offshore sailor with more than 50,000 miles experience and has completed trans-Atlantic passages (east and westbound) as well as many crossings of the Gulf Stream. For more info visit tonysails.com.

We were meticulous in not having any financial dealings in Cuba—not even airline tickets, a portion of which is remitted to the Cuban government.

We ensured the yacht was properly documented as owned by non-U.S. nationals. It was registered in Italy.

An exhaustive check was made of the yacht to ensure we were not inadvertently carrying anything contraband—drugs, currency etc.

A series of telephone calls were made to U.S. authorities prior to the trip, including Customs and Border protection and the U.S. Treasury Department in Washington D.C.

We had copies of documentation showing the vessel was already booked and paid for the onward transit to the European Economic Community.

We used our U.S. passports and made a point of being completely transparent in our declarations—no financial transactions between U.S. citizens and Cuba, including airfares—with our European friends paying for everything.