It’s a familiar theme, but as with all long distance passages, there are-and will be-vast differences.  (published August 2015)

It’s early June and another transatlantic passage is about to unfold, this one aboard Moondance, a beautifully maintained Swan 56. For me, it’s my 40th transat; for the seven others on the crew, it’s their first. Those details, however, can be hugely misleading and largely insignificant when compared to the myriad other details that have been and will be addressed prior to and throughout the passage. Each member of the team is accomplished in a wide variety of endeavors, and most have previously sailed offshore. As with any passage, before anyone is able to enjoy the offshore sunsets from the cockpit, there are numerous pre-departure details to address. Preparation can be a daunting task especially if you’re not familiar with the process, and regardless of how much experience one has, it should never be shortchanged.

Long ago, I heard it said that the sea will find any weakness. I’ve also heard it said that if I stay in sailing long enough and cover enough miles, everything that can go wrong, will go wrong. Good preparation is an effort to disprove that last statement. Well-orchestrated preparation is no less a thing of beauty than a properly equipped and managed vessel at sea. The preparation is, in fact, the rebirth of that potential, and Michael, the owner, has done a magnificent job of orchestrating that rebirth.

DELEGATING TASKS
The conception of that rebirth begins with the creation of  job lists. The more complete and well organized those lists, the more complete and well-organized the preparation can be. As one prepares a boat, the first task is to formulate the “ideal” and most complete list of tasks that one would like to accomplish on the vessel prior to her first use. Later, additional tasks may occur to someone, but if the job list is kept on file in a computer, the list can be easily modified, and the most complete version can be saved for future reference. The list should not only be a listing of tasks or tools, but it should also have space reserved for noting who is responsible for the completion of the task and a space for noting the date on which that task has been completed.

Aboard Moondance, Michael and his captain, Charles as well as Andy the yard manager and I exchanged lists to make sure that all details were addressed months in advance of our intended departure date. Time was a luxury that we had, thanks in large measure to early decisions and adequate lead time to accomplish the many tasks. Rudder bearings were inspected and replaced during the winter. Safety equipment was checked out, and individuals were assigned areas of responsibility so individual preparation could begin early, as well.

To make it easier to formulate the list as well as delegate various areas of responsibility, the general master work list can be broken down into specific areas. These areas should include: “Navigation”, “Electrical”, “Mechanical”, “Structural”, “Rigging”, “Sails”, “Winches/Deck Hardware”, “Safety”, “Provisions”, “Miscellaneous”, and “Tool Inventory”. Naturally, different vessels will have different requirements. Powerboat owners wouldn’t have much use for a job list that included sail repairs, but they might feel the need to break down the “Mechanical” list into smaller categories that included “Refrigeration”, “Main Engine”, “Generator”, etc. Similarly, some racing boat owners might want to break down the Tool Inventory list into: “Tools Onboard During Races”, “Tools Onboard For Casual Cruising and General Maintenance”, and “Tools In The Container/Van”.

The initial list should be as detailed as possible. By making a detailed list, it will be easier to determine whether something has been accomplished, and fewer tasks will be over-looked. By creating and keeping a “master list” that includes most of the jobs you would ever want to do, next year’s tasks of decommissioning and recommissioning will be greatly simplified. As new jobs occur to you, add them to the master. A great help has been to go through the list with the crew and get their aid in creating the original list as well as executing many of the necessary tasks. Determine who is responsible for the completion of a particular task or area of tasks and get their estimate of a completion date.

Any owner will only want to deal with a reputable yard, performing their tasks in a businesslike manner. And, as such, the yard is expected to make a reasonable profit on the work they undertake. But it’s up to the owner or his representative to make informed comparisons prior to making a commitment to commence the work. The relationship between the vessel’s owner and the yard need not and should not be confrontational; both have the same goal of improving the vessel throughout its preparation. But a clear understanding of duties and obligations by both parties put in writing prior to starting work  will go a long way in avoiding misunderstandings that are in no one’s best interests. It should also be understood that changes in the list of jobs to be performed by the yard will most probably also imply a change to the charges. Aboard Moondance we were fortunate to deal with Jamestown Boat Yard, qualified and experienced with numerous Swans. Andy, their yard manager has overseen construction and a vast number of refits, and he is friendly and trusted by all involved. 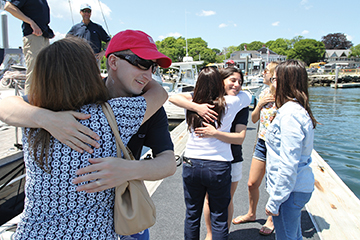 Well-organized and executed preparation is a thing of beauty: A choreography of people and tasks. At the end of it the boat is the winner, and the people involved can be justly proud. Within a few days the crew will soon be ready to enjoy this summer’s mid-Atlantic sunsets, and we will be prepared to safely face the inevitable rough days onboard Moondance. Hopefully the fruits of our preparations with be that the sea finds no weaknesses. We’ll know more next month.