Deciding when to head offshore can be tricky, and subject to the opinions of those around you  (published February 2014)

It had been a rough passage from England to Cape Town, South Africa. Drum had almost sunk— again! On that, then-most-recent trip in 1985, several of the flat panel composite sections had failed in the forepeak as the core sheared due to the constant pounding into heavy seas. The mast step had collapsed, leaving the shrouds slack and threatening to bring down the rig. And one of the life rafts had started to auto-inflate, leaving us with too little room in the remaining raft to accommodate the entire crew.

Safely in Cape Town and with a major refit completed, we had one day for sea trials before beginning the next leg of the Whitbread Round the World Race—a passage through the Southern Ocean from Cape Town to Auckland, New Zealand. Racing across the huge seas of the Roaring 40s and Screaming 50s, would we live to see New Zealand? Would the boat hold together this time? How could we know after only a few miles of testing the boat in Table Bay?

It was up to each of us to decide whether we would rejoin the crew that had been through so much together or remain safely behind. What would you do? Think hard about it, because it’s the same thought process, if not the same exact details, that you undertake every time you untie the dock lines.

SUPPORT SYSTEM
Whether you think about it as peer pressure or herd instinct, we all feel like we’re part of a larger team or group from time to time. There is a compelling instinct to move with the group, upholding our own position or place of responsibility within that group. It can be, and often has been, the glue that has kept groups of humanity together, alive and thriving, whether it was communities of farmers collectively raising a pole barn or prehistoric men hunting wooly mammoths. It’s a primal instinct, but it can also lead to one’s demise.

Each fall, delivery crews, passagemakers and rally sailors heading to the Caribbean from the East Coast face potentially dangerous weather prior to departure. It’s November in the North Atlantic after all. Sometimes, when already at sea, there may be little we can do in order to avoid the heavy weather, assuming the system is so large or so sudden that we can’t sail beyond the storm’s grasp. Prior to departure, however, we are faced with a different circumstance.

It is usual and common for skippers who are making the trip south to band together for mutual support before getting underway. It is, after all, a strong instinct and one that can benefit or harm any one of us. And it is out of this desire for a support system that the fall rallies emerged. It may be that a decision to leave when the rest of the group decides to leave is partially based on someone’s schedule, but more often the decision is based on a kind of informed consensus. Most of the time, the informed consensus works out fine. Sometimes it doesn’t.

DECISION MAKING
Perhaps the best lesson from which we can all benefit is to review the decision making process. When we were confronted by a similar decision aboard Drum, with the Southern Ocean looming just over the horizon, we each had to come to our own decision. The easy way out was to merely say, “Sure. I’ll go!” It was a non-decision to remain with the “herd”—or in that case, the same guys who had sailed together for the previous month. Ultimately, we knew that it was our individual responsibility to make our own decision.

Hassa, a Swedish crewmember, made our own individual decisions possible when he made the most courageous decision of all. He decided to remain behind. It was then, and still is in my mind now, that his decision enabled the rest of us to come to our own independent conclusions.

I have had that thought often throughout the following decades. Hassa’s independent decision enabled us all to form our own course of action. How then do we form our own courses of action while working within the larger group without someone like Hassa leading the way in another direction? Within the context of sailing we often hear the opinions of others. Regarding whether or not to depart on a particular weather pattern, we may listen to the guy on the boat in the next slip, or we may get a weather forecast from a company like Commanders’ Weather, professionals at looking at weather and offering suggested routes to some very qualified clients.

Whether I’m doing deliveries down to the Caribbean or racing across the North Atlantic, I always access the weather and routing advice from Commanders’ Weather. Prior to reading their forecasts, however, I look at weather maps, read text forecasts provided by the Weather Service and study satellite imagery. I’ve spent time learning the tools and I employ them to determine my own view of the situation and route. I form my own opinion prior to subjecting myself to the opinion of others.

As I then delve into the weather forecast provided by Commanders’ Weather, I try to find areas in which we agree or disagree. I’m not particularly bothered by either case. I don’t assume ownership of my opinions or theirs. Rather, I’m looking for the range and limitation of agreement to get a better understanding of how stable the variables might be.

If my opinion on the weather is in complete agreement with theirs, I have confidence that the weather forecast is solid. If our opinions on wind direction or speed might be at odds with each other, I try to better understand those differences. Is my projected position different from their understanding of where I might be located? Do they think a weather system will therefore pass north or south of me, while I think otherwise? Are my sources of information thinking that a weather system will be more or less severe than Commanders’ Weather? If so, I have a better understanding that the upcoming weather pattern may be a bit less predictable, and I may need to guard against the worst case scenario.

Opinions of experts are just that: opinions. None of us has complete knowledge, although theirs may be more comprehensive in some areas. As an example, given a particular weather pattern, weather routers may suggest a specific route for us to take. But if they are unaware of the fact that we’re sailing on a multihull or West Coast sled, they may not fully understand that our ability to go to weather would not be the same as if we were sailing on a Swan 56. The meteorologists may understand the weather better, but they may or may not understand our ability or inclination to work within a particular weather situation. 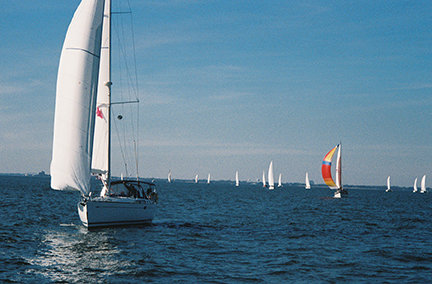 Ultimately, the choice to depart is yours and yours alone, and a well-informed, objective opinion can save your life. Aboard Drum, I’m still not sure if I merely took the cowards way out, deciding to remain with the crew and finish the 1985-86 Whitbread Round the World Race. In Cape Town we had watched every day as the re-fit took place. We were informed. I am absolutely certain, however, that Hassa made the courageous judgment call, avoiding the herd instinct and remaining behind. His courage enabled the rest of us to more freely determine our own course of action. As members of that herd, I hope that we all allow for and enable that kind of courage.