It has been a very long time since I have sailed at the front of a flat out racing machine where all of the athletic action takes place. But when my friend and yacht broker Glenn Walters called to see if I wanted to join his crew for the New York Yacht Club’s Race Week, I had a momentary senior moment and agreed. My usual place on larger racing boats has long been at the back where one handles running back stays, main sheet trim or navigation duties. And that’s where I must have imagined I would be.

Nope. On the first day, as the crew of 11 gathered aboard the new HH 42 on its mooring in Newport harbor (Rhode Island), Glenn ran through all of our assignments and handed me the task of running the pit where the halyards for the mainsail, headsails and spinnakers are handled. Okay. This was manageable. But it was disconcerting to learn that I would be the oldest person working the front of the boat by a mere 40 years.

Over the next four days we battled the seven other boats in the IRC 2 division in seven windward leeward courses out on Block Island Sound and one point to point race around Conanicut Island that lies in the middle of Narragansett Bay. Glenn’s crew was comprised of a core group of experienced younger racing sailors augmented by a few older folks like myself who were a bit less athletic and rusty. But the team gelled pretty well. 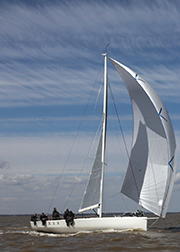 We tended to get good starts and would get ourselves into clear air for the first windward leg and then we tweaked trim for boat speed as we tacked to the windward mark. The HH 42 was designed by Judel//Vrolijk to be competitive in the popular IRC 40-foot size range and is optimized to perform best in winds from eight to 14 knots. We found that to be the case. In breezes above 15 or so, we needed more weight on the rail than we had while in lighter stuff, the boat did well.

Off the wind, the 42 is a screamer so we were consistently able to gain on boats ahead of us and could walk away from the boats in IRC 2 that we were supposed to beat, according to the ratings. As the regatta progressed, the crew work got sharper and the intricacies of marrying jib and mainsail trim improved significantly. Had we had another four days of racing as a crew, we would have really had the 42 clicking on all cylinders.

And while I was probably the weakest link in the front of the boat, the racing was still a lot of fun and the camaraderie of the crew great. Yes, I was the one dripping blood onto the foredeck since from the first day I kept barking my shins on winches and lifelines as we moved from rail to rail…what Glenn called my “boat bites.”

At the Newport International Boat show in September, two months after the regatta, I got a chance to sit down with the boat’s builder, Paul Hakes, for a discussion of what the HH 42 is all about.

“The idea we took to Judel/Vrolijk was to build a boat to compete successfully in the 40-foot range of IRC regattas” Paul said “This is a competitive fleet with a lot of owner-skippers who run their own programs.”

The design had a quite specific purpose, too. “We aimed at optimizing performance in the eight to 14 knots wind range because moderate and light breezes are common in many of the areas of the world where IRC racing is popular. We wanted to create a boat that would get to the windward mark near the top of the class and then walk away on the downwind legs.” 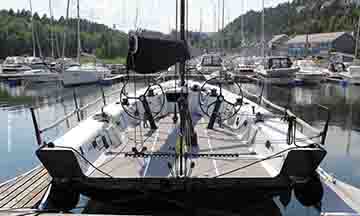 The boat has a broad skimming dish hull form with hard chines aft and a low, flat deck profile. Under the water it has a very high aspect spade rudder and a deep T-bulb keel. “The idea was to offer a boat that does not have really extreme foils so it is easier to get it to sail in the groove hard on the wind than some modern designs. This is good for owners who like to drive.”

While the 42 was designed primarily for day racing around the buoys as we did in the New York Yacht Club Race Week, it is also capable of racing in point to point events and short offshore events. In the around the island race, the 42 did well and gave us our best finish. The boat finished fifth in the annual Ida Lewis Distance Race and sister ships have competed in the Sydney Hobart Race and point to point events in Europe.

While the accommodations below are spartan, there are berths for eight crew, an enclosed head, a place for a cooler and an arrangement for a single burner, gimballed stove. You could do the Newport to Bermuda Race aboard the 42, but you would have to be young, tough and eager. The interior is really designed for easy sail handling and for repacking the spinnakers after a take down.

The cockpit has a functional layout. The coffee grinder that drives the two large winches in the pit is mounted aft so the beefy guys who grind will be back aft where the added weight is wanted, particularly when reaching and running. The twin helms are amidships where the helmsman has good visibility of the headsail and the instruments mounted on the aft side of the mast. The mainsheet trimmer is positioned just forward of the helm so he can communicate with the helmsman; on boats like the HH42, you often need to trim the main to steer the boat.

The jib trimmers are positioned just ahead of the mainsheet trimmer. The pit is at the companionway on the 42 as on most modern boats. Going forward we sailed with a mast man who sweated halyards and a foredeck man who handled raising and lowering the jibs and spinnakers. The 42 has a carbon bowsprit with two tack lines rigged for the spinnaker and Code Zero.

The rig on the boat was built by Southern Spars and is all carbon fiber and high modulus laminates. The boom is a rectangular carbon section with a carbon boom vang and sheaves for a single reef. The rig has airfoil carbon spreaders and Nitronic rod rigging. At the base of the mast, there is a sliding plate system and an integral mast jack that allows you to insert or remove wedges from the step to optimize the shape of the mast and the tension on the headstay. The mast is rigged with two running back stays that run on both sides of the high roach, square-top mainsail. These can be tuned with hydraulically powered deflectors near the top of the rig. 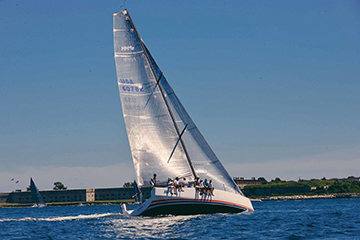 The headsail sheets trim through rings that can be adjusted in minute detail in three dimensions, thereby allowing the jib trimmers to optimize foot and leech tension and the width of the slot between the jib and the mainsail. The infinitely adjustable sheets enable you to power the boat up quickly with a full sail shape and wide slot as you come through a tack and then allow you to sheet in and close the slot once the boat is getting into the upwind groove.

Needless to say, the boat is a sailing machine that requires a lot of time and practice to find its optimized settings for maximum boat speeds. Yet, for those of us who love to sail well and want to race competitively, a boat like the 42 is a true pleasure that offers challenges, rewards and a good shot at the silver.

Paul Hakes is a veteran builder of high tech racing boats. He has built a number of TP 52s, a pair of IMOCA 60s, plus a number of one-off, high-tech racing designs. Most of these boats were built in his home city of Wellington, New Zealand. A few years ago, Hakes joined Hudson Wong, a Chinese manufacturer and multimillionaire, to build a large, modern boat building company. Wong knows a thing about business; among other products, he builds most of the Louisville Slugger baseball bats sold around the world and many of the branded barbeques sold in box stores like Home Depot. Wong employs about four thousand people in his factories. Boat building was to be something of a hands-on, hobby business for his sunset years.

HH (Hudson and Hakes) built several Gunboats on contract before that company went bankrupt and is now building their own Melvin and Morelli high performance cruising cats in the brand new facility that Wong build. The first HH 66 was launched for a European owner this summer and has proven to be both very fast and luxurious.

The HH 42 is a project that Hakes has wanted to pursue for a while. “The boat was designed to be built in series for owners who wanted to race at high levels without the huge costs involved with building a custom boat,” Hakes said. “So, we built a male plug and from that took a female mold.” 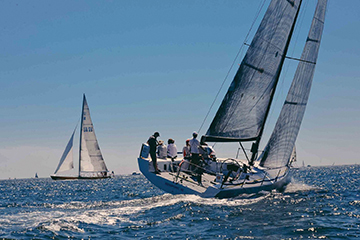 The boat was also an exercise in modern boat manufacturing. “We set out to create a boat that craftsmen could build without using a tape measure. The molds for the parts were all created with CNC machines to extremely fine tolerances and all the parts can be assembled without a need for trimming or adjustment. “

The hull is laminated with two layers of carbon fiber prepreg around a high density, thermo-formed foam core. The whole deck and hull are then baked at high temperature to cure the laminate. The final parts are both very light and strong.

“The emphasis in the design and build process has been to go very high tech and be as innovative as possible. The final product is a modern racing machine that will be fast but fairly easy to sail, competitive without being very expensive and available in a range of owner specified configurations.”

I may have been bloodied a bit during the regatta aboard the H42, but I was also introduced to a new level of racing and the fun and rewards of competing at a fairly high level in a thoroughly advanced racing boat. 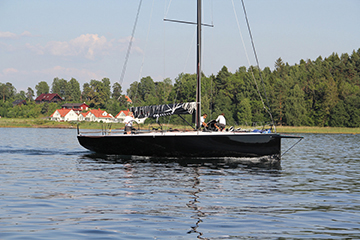