I’ll try not to get too technical on this subject, but there are some basic principles that you need to know before we get going. Firstly, we won’t be talking about hot and cold too often. It will be all heat, just at different temperatures above Absolute Zero (-460 degrees F). Next, we will be working in a unit of heat measurement known as a British Thermal Unit or Btu, and this is defined as the amount of heat required to raise or lower one pound of water one degree Fahrenheit. Also, it is important to remember that heat travels in one direction only, from a warm, high temperature area to a lower temperature area, and that we don’t “make cold”, we simply remove heat from one area and transfer it to somewhere else.

THE SCIENCE
There are several different types of refrigeration systems but I will be describing a “Compression System”. This can be best described as being in two halves: One half will be on the discharge side of the compressor and is called the “high side”, while the other is on the suction side and is called the “low side”. The compressor, either electrically or mechanically driven, compresses a special gas called a refrigerant from a low pressure (typically 0-20 psi) up to a high pressure (typically 100-150 psi), and in doing so raises its temperature considerably.

This hot, high pressure gas is fed by tubing or hoses to a heat exchanger called a “condenser” where it is cooled and subsequently the gas condenses into a liquid. The condenser can be cooled by air, water, or even “keel cooled”, which is the most efficient of all. The cool, high pressure liquid refrigerant is then fed on to an item inside the area to be refrigerated called an “evaporator”, and this can be in one of several forms.

Upstream of the evaporator is an item technically termed a “Metering Device”, and this is simply a restriction in the system that separates the high and low sides of the system. It can be either a mechanical device such as an “expansion valve”, or simply a long, thin tube with a very small bore called a “capillary tube” (or “cap tube” for short). When the liquid refrigerant reaches the other side of the metering device, it is now on the low side of the system and is exposed to the suction effect of the compressor, and rapidly drops in pressure. This sudden drop in pressure causes the liquid refrigerant to boil and evaporate back to a gas, and it does so at a very low temperature. From the evaporator, the low pressure gas is fed back to the compressor where the whole process starts again. There are additional components on many systems, but in this introduction I’ll not complicate the issue by including them. 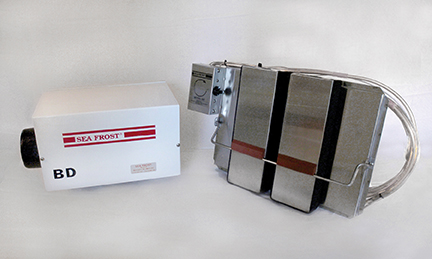 HOW HOT MAKES COLD
Now we need to find out how a boiling liquid cools things down, and here I’ll describe two different types of heat, “sensible heat” and “latent heat”. The best example is a container with one pound of water in it. If we add one Btu of heat, it’s temperature will rise by one degree Fahrenheit, and this is known as sensible heat.

If we keep on adding Btu’s, its temperature will keep rising until we reach 212 degrees, at which point the water will start to boil and evaporate. The temperature will not rise any further until we have added 960 Btu’s and all the water has evaporated. This heat is called the “latent heat of evaporation”, and is the heat required to change a liquid to a vapor or vice versa. The temperature does not change while a change of state is taking place.

Now if instead of adding sensible heat to our one pound of water we remove it, one Btu at a time, the temperature will fall one degree Fahrenheit at a time until we reach 32 degrees, when the liquid will start to freeze and turn into ice. It will now stay at 32 degrees until we have removed 144 Btu’s and all the water has frozen. This is called the “latent heat of fusion”. One good example of the latent heat of evaporation is water being used to douse a fire. As soon as the water hits the burning object it turns into steam and takes a massive amount of heat energy away from the fire, lowering its temperature below the flash point. 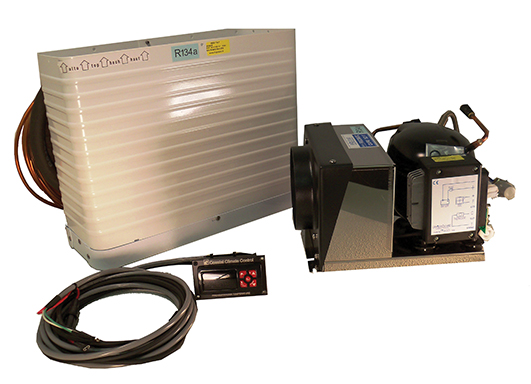 THE TECHNOLOGY
This same principle of the latent heat of evaporation is used in our compression refrigeration system. This is achieved by using a substance (refrigerant) that will boil at a very low temperature and absorb large amounts of heat in the process. Nearly all small systems now use an environmentally friendly refrigerant designated “R134a”. Unlike water, if R134a is exposed to atmospheric pressure it will evaporate rapidly, so is kept in enclosed containers or inside a refrigeration system where it exists in both liquid and vapor forms.

When the compressor is started, it pumps up the pressure of the R134a gas and also heats it up. From the discharge side of the compressor, it is piped to the condenser; either air cooled, water cooled or keel cooled. The condenser then cools down the gas below its dew point and it changes state into a liquid, still at a high pressure, before being fed on to the metering device and evaporator.

When it exits the metering device it is exposed to the suction side of the compressor and is at a low pressure, and, now inside the evaporator, it boils rapidly and evaporates back to a gas at a very low temperature, typically around – 26 degrees F. This change of state absorbs vast amounts of sensible heat from the evaporator which in turn removes heat from the insulated box, thereby lowering its temperature. The size, type, and settings of the components and the amount of refrigerant in the system are critical in ensuring that all of the refrigerant has reverted back to a gas as soon as it leaves the evaporator and before it is returned to the suction side of the compressor.

COLD BEER
The whole point of a refrigeration system is to preserve fresh foods and keep drinks cool and refreshing. The quality of the insulation around the fridge box has a huge impact on the refrigeration unit’s ability to do its job efficiently. If heat can migrate through the box’s sides, top and bottom, or flow into the box around seals on the lids and doors, then the cooling process becomes retarded and the compressor has to work overtime to achieve the desired results.

Rob Warren is a veteran sailor and is the founder and owner of Coastal Climate Control.

View all posts by Rob Warren