Our Leg 4 crew joined us in Reykjavik, Iceland on Tuesday, August 2 at noon and following lunch we set sail on a 120-mile overnighter for the Westman Islands, located right on the rhumbline for the Faroe Islands. We arrived in time for breakfast and were able to tie to a new uncompleted pontoon loosely tied alongside the main shipping wharf in Vestmannaeyjar. It took some fancy line work, but Amanda and Eirik managed to limit the movement of the pontoon so we wouldn’t clunk into the 200-foot, steel trawler close astern of us as the current surged in and out of the harbor. 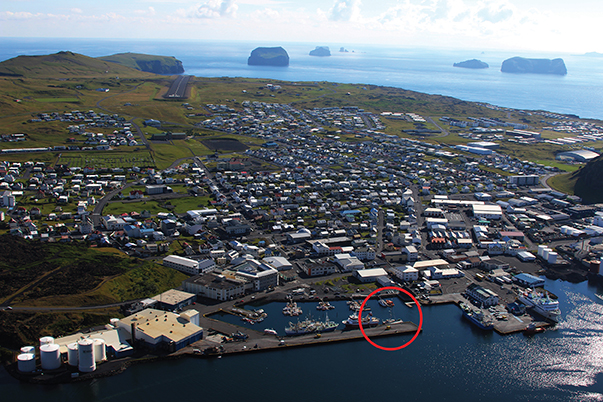 Originally we’d planned to spend the night in Vestmannaeyjar but it looked likely that a powerful, 980 mb low would beat us to the Faroe Islands if we did, so we enjoyed an intense day of adventures instead. These included climbing to the top of the mountain that overlooks the harbor, swimming at the excellent community pool, visiting the volcano museum and lava flow plus checking out the little town before setting sail at 1830. Phew! 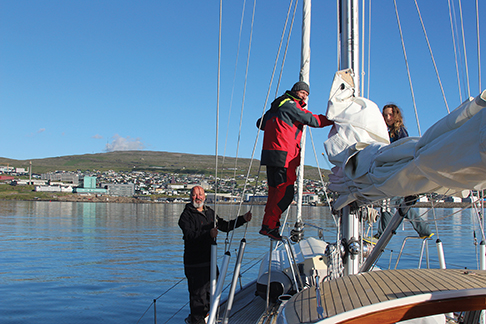 THE FAROE ISLANDS
We had a spectacular departure as we sailed along Iceland’s south coast with sun on the glaciers and smooth seas. Too smooth, in fact, as we had to motor for much of the 390-mile passage to the Faroes. Tórshavn bills itself as the world’s smallest capital city and with a population of 12,650 it really feels more like a friendly island town than a city. The very active boating club and the port offer guest moorage, showers and laundry in the inner harbor and we were moored near six very jovial ARC World yachts who were completing their world circumnavigation. 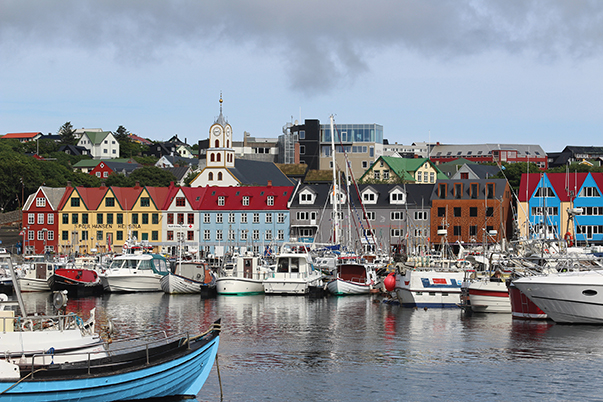 Thankfully we’d managed to beat the severe depression and our winds started picking up during dinner reaching well over 40 knots in the harbor several times over the next 36 hours. This weather system, which dropped down to 971 mb at one point, resulted in several containers begin washing overboard from a nearby container ship and a huge oil platform running aground on Scotland’s nearby Outer Hebrides after it broke away from its tug.

The locals in Tórshavn seemed totally oblivious to the blow with ferries to the outer islands and Denmark coming and going regularly even though seas were forecast to eight meters just outside the harbor. We made good use of the stormy Sunday covering our teaching topics of Storms and Communications before joining some of the crew from the ARC boats and heading up the hill to the community pool to swim laps.

Although it was still blowing and raining the next day, our intrepid crew organized an excellent half day tour of two of the islands connected by long undersea tunnels. Our tour guide Ula and driver Jon showed us several neat little seaside villages, an old whaling station plus they pointed out numerous waterfalls where the updraft winds were so strong that the water from the falls is blown back up the sides of the hills and mountains.

In the northern village of Gjógv we stopped for lunch and admired the Danish prime minister’s modest summer house, while Ula explained that the prime minister is married to a girl from the village. That evening we presented our South Pacific PowerPoint talk to the boating club and the ARC World crews. Many keen local boaters attended and, although most had very little knowledge of the South Pacific, they found the concept of sailing there on their own boats quite intriguing. 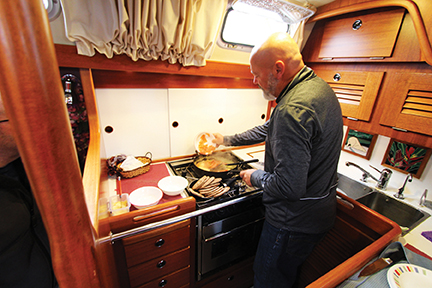 By Tuesday the blow had mostly gone through, leaving clear skies so at 0600 we set sail for Suõuroy Island, 33 miles to the south. We had some great sailing conditions providing serious reefing practice before stopping for lunch and to explore the small village of Tvøroyri. In the afternoon, we set sail for North Rona, an uninhabited island north of Scotland’s Outer Hebrides but when we received a forecast showing fresh southerlies we altered course directly for Stornoway, the northernmost harbor and port of entry on the Scottish island of Lewis. 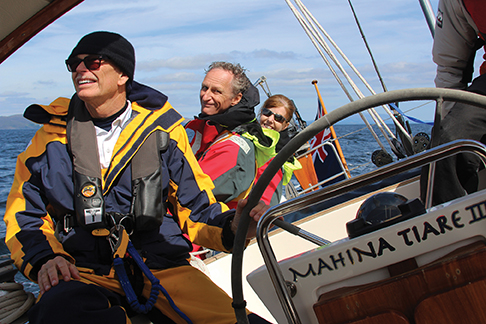 We arrived at the Stornoway’s harbor entrance at midnight and as an afterthought I called the harbormaster on VHF Ch 16, never expecting to receive a reply. What a shock when the night watchstander came right back giving us directions to a guest moorage pontoon and saying he’d be there momentarily to take our lines and welcome us to Scotland. Several of us couldn’t resist a wander around the small harbor town and, although it was drizzly and foggy, it added a charm to the tiny lanes that reminded us of a deserted set from a Harry Potter film. 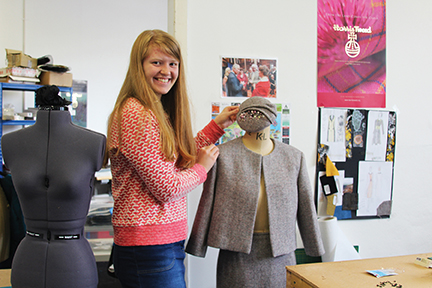 After clearing customs the next morning, we set off exploring. First on the agenda a walk through the wooded park across the river to Lews Castle and museum then back to town to check out the various Harris Tweed boutiques. The annual Harris Tweed Festival was happening over the weekend and many designers and artists were in the process of finishing pieces for the Harris Tweed Fashion Showcase, while folks about town were discussing what they’d be wearing for the Tweed Bicycle Ride. Our crew also discovered that if you’re hungry, there’s no shortage of chip shops in town and one even specializes in battered local haggis to tempt the taste buds. 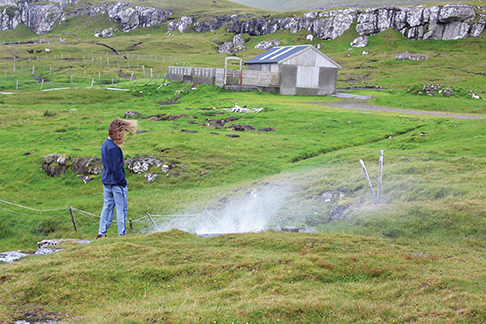 On Friday, we set sail for the uninhabited Shiant Isles where we found a fairly secure anchorage and decided to stay the night. Once the anchor was set, we eagerly headed ashore but quickly discovered the hiking was rather boggy. After getting caught in a sudden downpour upon reaching the mountain top, we quickly scurried back to the boat ready for hot drinks and a blast of warmth.
We had an excellent 25-mile sail the next day before reaching South Rona which lies to the east of the Isle of Skye. The Stornoway harbormaster’s mother had been raised by her lighthouse-keeper parents on the island and he’d recommended a tiny anchorage tucked into the coastline on the west of the island. 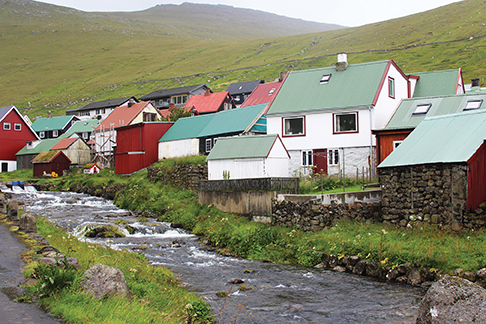 Mallaig, the small but busy fishing/ferry port village that serves many of the Inner Hebrides beckoned on Sunday and as we arrived we noticed a large cloud of smoke rising up from behind the harbor. For years we’ve wanted to see The Jacobite; an ancient steam passenger train also known as the Hogwarts Express, as seen in the Harry Potter films, and for the first time we were in luck.

The storm that we’d experienced in Tórshavn had caused a landslide closing both the only road in and out of Mallaig and the rail line. The steam train seemed alive as it sat at the station hissing and smoking with occasional jets of steam and water shooting down on the ground beside the tracks and, after peeking into the ornate carriages, we had fun chatting with the engineers. 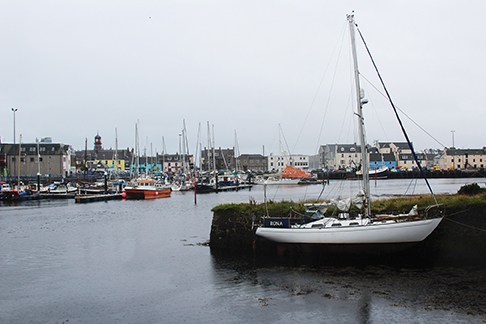 We had a glorious sail to Muck, the smallest of the four Small Isles and long a favorite of ours. Several of our crew had enjoyed reading A Drop in the Ocean, which is a compilation of Polly Pullar’s conversations with Muck’s exceptional farmer and Laird, Lawrence MacEwen. Lawrence’s accounts of his life spent on Muck are humorous and heart-rendering but what shines is his successful struggle to keep this tiny island a vibrant and welcoming community. Sadly, we just missed out on visiting the amazing little craft shop and tea house run by Lawrence’s wife Jenny as we arrived after their 1630 closing time but several of our crew enjoyed visiting the new lodge overlooking Gallanach Bay. 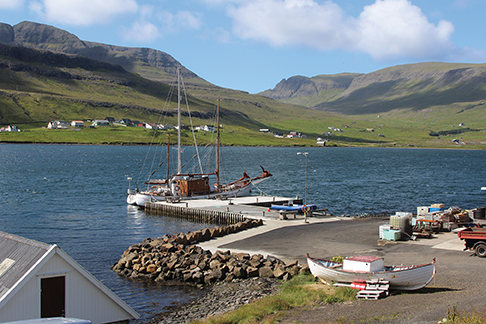 A sunny afternoon, sandy bay and sparkling blue water temps around 60 degrees were enough to tempt two of our crew into taking a swim, all the while making it hard to believe we were in Scotland.
The next morning it was Amanda’s and my turn to take a plunge and we vigorously scrubbed Mahina Tiare’s hull and prop before setting sail for Tobermory, the very touristy but fun and colorful little fishing port on the Isle of Mull. Calling the harbormaster ahead of time meant there was a place for us to berth and by dinner time the docks and moorings were all full with boats from all over Europe, which made for interesting socializing. 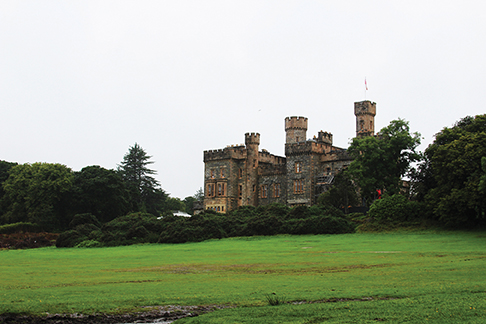 Duart Castle, home of the Maclean clan, sits perched on the eastern tip of Mull and it’s impossible to sail past without stopping, which we did the next morning. It was then on to Oban where we anchored off the town to enjoy a farewell dinner at the art deco Regent Hotel before bidding farewell to our crew the next morning. Amanda and I then headed to Oban Marina on nearby Kerrera Island for a few days of boat maintenance and provisioning in preparation for our next leg to Sweden via Orkney.

John & Amanda’s current boat, Mahina Tiare III is a Hallberg-Rassy 46 which they have sailed 198,280 miles since launching in 1997. They update their website, www.mahina.com by satellite from around the world. 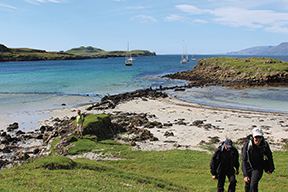 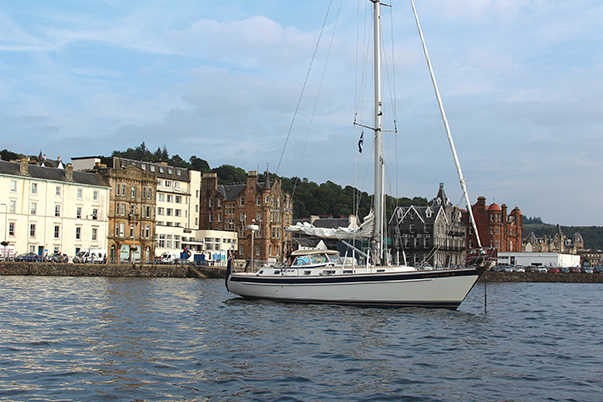