Problems can happen as a result of a variety of precipitating events. What caused all of the electronics instruments to go out as we crossed the North Atlantic? Lightning strike in the middle of the night? The batteries went flat because the diesel fuel was fouled, and we couldn’t run either the engine or genset? The regulator malfunctioned and fried all of the batteries? Knowing the cause of the problem may or may not help you solve it. But, in any case, you will have to deal with the situation when you’re mid-ocean.

Whether you’re in a lifeboat or the electronics on your 120-foot motorsailer have just been smoke-tested in a lightning strike, knowing a few navigational tricks can come in very handy. As a navigator, you’re still responsible for getting your vessel from Point A to Point B as safely as possible. Having a navigator’s bag of tricks will not only help you with that responsibility—it will also help you feel more at home as you venture across oceans.

First and foremost, as a navigator you need to know where you are. Keeping an accurate, up to date, hard copy log will go a long way in getting you started correctly if your instruments begin to blink, smoke or melt down. While offshore, you should make log entries at least every three or four hours, and as you close with a coastline, you should make entries at least every hour. In coastal navigation situations, you should plot your position on a paper chart more often as you go on soundings. Then, if you lose your electronics, you have a good place from which to start your DR (dead reckoning). As a minimum, the log entries should include date and time, position, speed, heading, wind speed, wind direction and any other relevant information.

In an age of electronic navigation, we all become increasingly dependent on GPS. Having a battery-operated, handheld unit or two with spare batteries could be a godsend in a time of need. If you have a remote antenna, charging unit, and an interface capability with your on-board computer, you may go a long way to making an emergency transition relatively painless, assuming that you haven’t lost all sources of electrical charging. Keep in mind that certain instruments, like some satellite communications devices, also have a built in GPS that can be utilized if your main unit goes on holiday.

Sextants still work, even in the Information Age. Without any form of electricity or handheld GPS device, it may be the only source of positioning information. Having the necessary tables and a working knowledge of how to use a sextant could be a very worthwhile resource. Even if you proudly possess several battery-operated handheld GPS devices, keep in mind that during a serious lightning strike, even battery-operated devices can be destroyed. If lightning is impending, I often put a handheld GPS in the boat’s oven, which can act as a Faraday cage during a lightning strike, protecting the device.

If we know where we are, the next bit of information that will be of interest to us will be which way we’re going. There are a number of tricks to figure out our heading. Some are more obvious than others. The first choice would be to find the North Star at night and see how our course compares to its location if we’re in the Northern Hemisphere. If our compasses have been re-magnetized in a lightning strike, we can head our vessel towards Polaris, noting the compass bearing to the star. Allowing correctly for magnetic variation, are you pointed toward true north? If not, how far out are the compasses? If locating the North Star is a problem or as an additional check, use Orion’s Belt if it’s low enough on the horizon. In the constellation Orion, the uppermost star in the belt rises almost exactly in the east and sets almost exactly due west.

In southern areas such as the Caribbean or further south, where Polaris may not be visible, the Southern Cross can help guide the way and will indicate south. The south celestial pole is located approximately at the intersection of a line through the longer axis of the Southern Cross with a line from the northernmost star of Triangulum Australe perpendicular to the line joining the other two stars of the triangle. No other conspicuous stars mark this spot. Star charts can provide a very exact means by measuring the accuracy of your compass.

Of course during the day, we know that the sun rises somewhere in the east and sets somewhere in the west. But a few hours after sunrise, especially in the tropics, determining direction using the sun can be refined for our bag of tricks. To help determine direction during the day, you can use a watch with an hour hand if you don’t have a functioning compass. Point the hour hand toward the sun. An imaginary line halfway between the hour hand and an imaginary line to the 12 will point approximately toward south. Naturally, a compass is more accurate, but at least you will have an idea of how to check your deck compass to make sure it hasn’t been totally rearranged by the lightning strike. And if you don’t have a compass, your watch could be the next best thing.

If we know where we are and where we’re heading, the next thing we’ll need to know for our DR is how fast we’re going there. How can we determine speed without benefit of electronics? On some of my early deliveries, a mere 35 years ago, boats often carried taffrail logs to determine speed and mileage. Spinners were towed behind a boat, and as the line twisted, an odometer recorded the information. A mechanical device, the taffrail log wasn’t dependent on electricity, but the spinners were susceptible to being eaten by sharks on occasion. Those unaccustomed to sextant and taffrail log would be amazed at how accurately landfalls could be predicted. And that form of navigation can be performed without benefit of electricity.

In most cases, however, the taffrail log has become extinct as an available navigational tool. Returning again to basics, speed can be quickly calculated by tossing a floating chip (biodegradable, please) off the bow and timing how long it takes to float a given distance beside the vessel. Speed is a measurement of distance divided by time in which 1 foot / second = .5925 knots. If you multiply both sides of the equation by the same number, the new values will also be equal. If, for example, it takes a wood chip floating down the length of a 60-foot vessel five seconds to complete the distance, you merely multiply 60/5 x .5925 to find the speed in knots. The boat would be traveling at 7.11 kts approximately. If you etch the equation “1 foot/second = .5925 kts” in the bottom of the nav tabletop, you’ll always be able to figure out your boat speed. Doing the timed procedure several times and averaging the results may help provide a bit more accuracy.

Now that you know where you are and how fast you’re going, you’ll probably still be interested in the situation surrounding you such as wind speed and the distance off objects on the horizon. Observation will help answer a number of questions for the navigator. Wind speed can be approximated using the Beaufort Force Scale. Originally developed to provide a scale based on visual observations of the sea surface, you can get a very rough equation of wind speed by subtracting one from the number of the Beaufort Force and multiplying that by five. The resultant number will be a rough approximation of wind speed in knots. (i.e.: Force 7 is about 30 knots +/- ((7-1) x 5 = 30). Also, it can be helpful to understand that whitecaps begin to form in about 11 or 12 knots of true wind speed. When the water temperature is very cold and the air temperature is rather warm, such as in the morning during the spring, wind at the masthead may not match the wind speed on the water’s surface, however. Those conditions are conducive to wind shear.

Radar certainly has its advantages in determining how far away an object is, but you can still get a good idea of how far away a ship or landmass may be by using the following formula. Distance to the horizon in nautical miles is approximately 1.15 x the square root of h, where h is the height of the eye in feet. In other words, if the height of your eye is nine feet above the surface of the water, the horizon is about 1 1/7 x 3 = about 3 ½ nautical miles. If you were trying to see the top of a mast that was 81 feet high, you could calculate its distance by the same formula. 1.15 x square root of 81 = 10.35 nm to an observer with a height of eye of 0. At a height of eye of nine feet, the top of the mast would be breaking the horizon at about 10.35 nm + 3 ½ nm = about 13.8 nm.

There are of course a number of 20th and 21st Century navigational tricks to draw upon. I’m sure many of you have heard about navigators following jet contrails to Hawaii, but I’m not sure how many navigators found Tahiti that way by mistake. From offshore, Atlantic City’s glowing electrical lume can be seen about 20 miles or more. Traveling through the Bahamas and other places, you can sometimes smell charcoal being made several miles offshore. For depth, breaking waves can warn you about shallow water when compared to a calmer sea state nearby. Your senses and keen observation can tell you quite a bit.

One of the more amusing anecdotes tells about “potato navigation” in Maine’s coastal fog. “Send the person with the strongest throwing arm up to the bow with a 10-pound bag of potatoes,” the story goes. “As you approach the anchorage, he should throw a potato every 30 seconds. As long as he hears a splash, you’re not too close to the shore. When he hears a thud, you’re too close.” While the story may be a bit of a joke and distort prudent navigation, a point can be well taken. Listen to what is happening around you as well as watch. And in a time of need, there can be more to navigation than mere electronics. 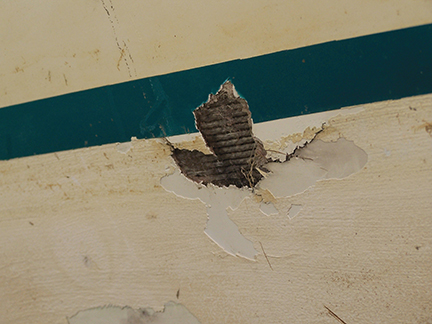 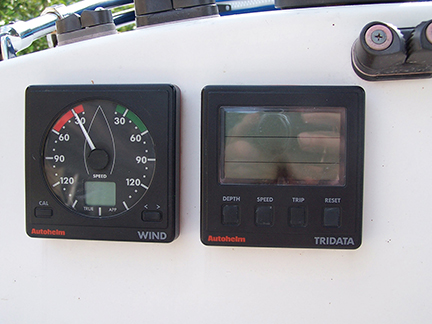