We stowed our sails and with the Yanmar thumping below, watched in fascination. A quarter-mile away thousands of frigate birds soared above the island ahead, hardly a wing flapping as they rode invisible currents on their seven-foot wingspans. We neared and dropped the hook behind rock spires that border the anchorage on the east side of the island, riveted by aggressive displays of aerial acrobatics all around. Gangs of frigates sought to steal fish caught by hungry boobies. The stakes are higher than a meal, as collision-related injuries are a leading cause of death for Magnificent Frigate birds (Fregata magnificens). 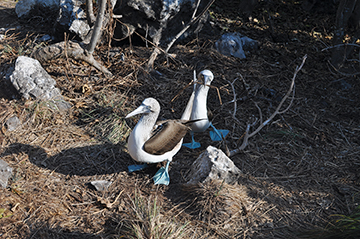 Isla Isabel, 15-miles off the Pacific coast of Mexico, between Mazatlan and Puerto Vallarta, is a national park that packs a lot into its less than three quarter mile square area. Landing is prohibited on the rock-face shoreline fronting the anchorage where Mexican scientists and graduate students occupy bird blinds to study the seasonal courtship and mating behavior of the blue- and brown-footed booby populations. So we dinghied around the south point to Playa Chica.

A green iguana approached us curious or hungry as we pulled the dinghy ashore, the starting point for two island hikes. We walked first beyond the fishing camp, climbing an increasingly steep slope to the rim of an extinct volcano cone. The center of the crater is a freshwater lake supporting the island’s avian and reptile populations. The trail took us along the lake, over the other side of the rim and down into a forested plateau.

The canopy of the Milk Stick and Garlic Pear trees is only about as high as a basketball hoop and thick with clusters of large frigate bird nests. We stared into the eyes of fluffy, white-feathered chicks that leaned over to watch us, their coal-colored parents equally curious. We stopped short at the sight of one bird ahead of us on the ground, its wings spread out fully. We learned that among this colony—one of the largest in the world—falling beneath the dense canopy is the other leading cause of death, the birds’ wingspans an impediment to flying free.

The trail then led us out of the forest to an area of tall grasses lining the shore. Blue-footed boobies were everywhere underfoot. As we passed, male and female couples hissed and honked at us with their necks craned up and their eyes non-blinking and expressionless. But it was their pretty feet that caught our eyes, ranging from brilliant pastel blue to pale green. For males, foot color changes with diet, and females observe this and pick their mates accordingly. Additionally, mothers use a chick’s foot color to determine whom to feed. 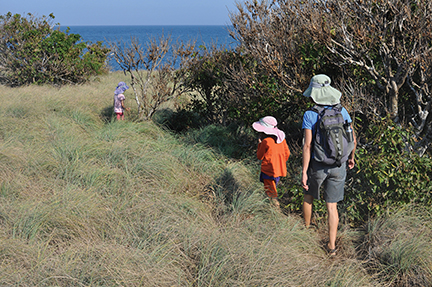 Later we took a steeper hike up from Playa Chica and walked by hundreds of docile iguanas in all sizes. We hiked up the rugged slope of the southern rock bluff and were rewarded with a stunning view of the bay and much of the island. After just a half-day ashore, it was clear to us why so many call Isla Isabel the Mexican Galapagos.

View all posts by Michael Robertson