There are as many ways to parse time as there are readers of this article, but there is more to a watch schedule than time  (published august 2013)

Lia Ditton and I were a couple of days into another delivery, this passage double handing a 48-foot catamaran from Antigua to Norfolk, VA. The winds were expected to go light, and we were off to a good start, knocking off the miles while sailing quickly northwards.  She was asleep on “her” side of the boat, in the starboard hull while I had the midnight to 0400 watch. With autopilot engaged, the task was reasonably straightforward: maintain a good lookout while monitoring systems onboard. Suddenly, a loud metallic bang hit the port hull’s deck outside. I immediately ran to take a look, and somehow—still unknown to me—Lia was only a few steps behind me.

What we found was the port cap shroud, lying on deck and trailing in the water—the side stay that holds the mast upright!

PLANNING & PREPARATION
I’ve been fortunate to sail with a wide variety of people. Male or female, highly experienced or sometimes novice, they came from places scattered around the world.  The most common denominators in the group is that they are good, responsible people, eager to work together, eager to learn and equally eager to share their experiences and talents. The passages have been short, long and in between, often short-handed as well as fully crewed racing situations. I’ve been fortunate. That’s not to say that it has always been easy. But even through the difficult situations—weather or mechanical failures—the people with whom I’ve doublehanded have become true life-long friends.

Not unlike the people I’ve sailed with, watch schedules come in all sizes and configurations. When conditions were good and the autopilot was functioning properly, Lia and I experimented with four hours on and four hours off. Whoever was on watch shortly before the dinner hour, prepared the meal. I must admit that we probably ate better when she was on watch at that time, but I still claim that my pasta al pesto constitutes a complete meal and the only culinary skill involved is boiling water.

Pre-departure preparation does a lot to help the enroute responsibilities, so planning ahead is a worthwhile exercise, especially when shorthanded. It was our good fortune that Ginnie Hess, with whom I had crewed on previous passages, had done a thorough and magnificent job of provisioning the boat for our trip north. When a four-hour on, four-off schedule began to seem a bit too long, Lia and I jointly decided to reduce the time to three hours on and three off. The objective in any watch system is to sufficiently rest the off watch crew so they can perform at an optimum level while they are on watch.

Difficulties sometimes rear their ugly heads in clusters and the trip from Antigua was no exception. We had managed to put a jury rig in place, using doubled-up Spectra line run to the masthead in place of the cap shroud. It’s the sort of temporary repair that comes with some risk of failure, as you might expect. Not wanting to drop the rig over the side, we opted to motorsail very conservatively to West Palm Beach, FL to make a more permanent repair. Happily enough, the jury rig seemed to hold up. Unhappily, the autopilot stopped working.

WATCH SYSTEM VARIATIONS
Watch systems can be adapted to changing situations, various crew capabilities, weather or other criteria. With the work load now substantially changed and hand steering a constant demand, Lia and I reduced our watch times to two hours on and two off. If something needed to be checked or reviewed, it could be done at the watch change. The problem with a two on, two off schedule is the fact that there is little time to get ready for bed, sleep, get ready for watch and eat without fatigue quickly setting in.
Sailing with a crew of two plus myself, three in total, an ideal watch system of three hours on watch and six hours off watch can be implemented. There is plenty of time for rest, general maintenance, food preparation, weather and navigational tasks.
Full racing crews often use a “Swedish watch” system: six hour day watches and four hour night watches. As an example, one watch may have from 0800 to 1400 and be off from 1400 to 2000. Then, they would be on watch again from 2000 to midnight and on again from 0400 to 0800.  The advantage to that two watch system is that there is a long period to sleep during the day and night watches are relatively short.  Additionally, with an uneven number of watches, the on and off periods rotate so no one has the same time frame two nights in a row.

Years ago, I sailed with Rich Wilson, setting the San Francisco to Boston record in a 54-foot trimaran. During that passage, we had five hour watches with a four hour watch from 1000 to 1400. We did that double handed passage in 69 day, 19 hours, so we had plenty of time to get used to the pattern. We also decided that when we did the New York to Melbourne record in 2001 we would shorten the watches to four hours each. Because there is an even number of watches, we each kept the same time slots throughout that 69 day passage. I could watch the same stars rise and set throughout the trip, getting to know them like friends. The shorter watches seemed more effective and less tiring in heavy weather and less tedious in stable conditions.

There are, of course, other ways to mix it up with interlocking systems for four watches, offsets of one kind or another and numerous ways to further complicate the matter. Over the hundreds of thousands of miles and numerous companions, I’ve found that the key features of a watch system are less about time and more about people.

THE HUMAN FACTOR
Regardless of how many hours or watches there are in a particular time frame, trust features prominently in any watch system.  People are supposed to be on time for their shift. It’s the on watch crew’s duty to make sure the next watch is up early enough to get there. It’s also a nice touch to have hot coffee ready for that still-sleepy next watch.

While on watch everyone on that boat trusts their life to you. It’s a responsibility that should not be taken lightly. If you are 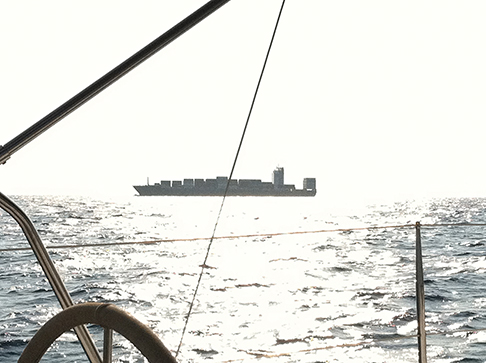 standing a singlehanded watch and fall asleep, you are less than effective in avoiding problems that can affect everyone. Fire, flooding or collision can all happen at any time and the on watch, when taking their duties seriously, can take a potential disaster and recast it as a mere inconvenience.
If situations arise that are out of the ordinary, waking up the captain or other responsible party can help to make sense of it. When an oncoming vessel’s running lights seem to be doing something strange, another set of eyes may help you to realize that it’s a tug shortening its tow prior to entering a canal or a fishing vessel hauling back on its trawl. And if you happen to be on a collision course with a ship, having the extra person on deck means you can alter course or communicate via VHF far more conveniently.

Good watches are built on trust, reliability, timeliness, taking care of each other and mutual respect. They are all interrelated elements and all important. How the time is parsed is almost a secondary consideration if the other elements are in place. The timing of the watches is only important within the context of helping everyone complete their duties the best they can. 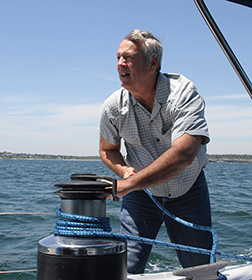 Lia and I made it to West Palm Beach, FL where we were able to have proper replacement rigging delivered and installed. Ultimately, we made the rest of the passage to Norfolk, safe, sound and in many ways better for the experience, having built a trip on trust, reliability and mutual respect. Subsequently, we have done thousands miles doublehanded, including a trip up the Indian Ocean from Mauritius to Dubai, through the tropics and past pirates.
But that’s another story….