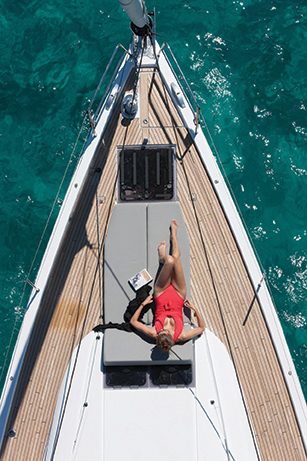 When I woke just after dawn and checked the weather app on my phone, I could see we were in for a storm. The radar showed a massive squall line that reached from Cuba in the south all the way to Jacksonville in the north and it was depicted in alarming colors of deep greens, yellows and reds. Red is not good on a radar screen. The front was heading from Florida’s west coast toward Miami and the forecast indicated that it would arrive at about 11 am with winds in the high 30s and tropical rain. Okay.

The phone rang soon after and Paul Fenn from Jeanneau America asked if I thought we should head out a bit earlier than planned to test sail the brand-new Jeanneau Yachts 51. Yes, of course.

So, it was close to 9 am when we all gathered on the 51 at Miamarina and quickly got underway as we could see the clouds building ominously to the west. Aboard that morning was Paul Fenn from Jeanneau America, Herve Gastinel, CEO of Group Beneteau, which owns Jeanneau, Dave Dodgen of the Florida Yacht Group and his wife Gail, and Greg Pittrizzi from Hilton Head Yachts of Charleston, SC. Dave and Greg are both Jeanneau dealers getting the opportunity to sail the new 51 and get to know the boat better.

The 51 handles easily under power. The engine controls are at the starboard wheel and visibility from there forward is excellent, even with the large dodger in place. The boat comes standard with an 80 horsepower Yanmar and a sail drive but you can opt for a 110-horsepower engine that has a shaft instead of the sail drive.

At cruising revs of 2200 rpms, the 51 cut through the water at seven knots. At full throttle, we saw the speed climb to almost nine knots. The standard boat comes with 63 gallons of diesel. For long distance cruisers, the company makes a 148-gallon capacity available as an option. With the 110-horsepower engine burning about 1.5 gallons an hour at 2200 rpms, the 51 will have a safe cruising range of over 500 miles, which veteran passagemakers consider the minimum required.

As we were motoring toward Biscayne Bay we had a hat-overboard drill so we spun the 51 around to see if we could recover the hat before it sank. The 51 has a nifty folding transom that folds out and lowers with the push of a button. We decided that this was the best option so we lowered the transom to form the large swim platform and then attempted to back down on the hat. But, before we could make the rescue the hat was swept under the hull of a moored workboat and out of our reach. Still, had we had a person in the water, the platform would have been a great way to get him back aboard.

The 51s cockpit is huge and has a large table with folding leaves that will sit eight for meals. The life raft compartment is in the table’s base. The forward end of the cockpit is the lounging area where you can stretch out under the dodger and stay warm and dry, even when the clouds are getting dark and a storm is threatening, which it was.

We motored under the bridge at the Rickenbacker Causeway and soon were in the open if shallow waters of Biscayne Bay. The wind was piping from the east so we rounded up to port and rolled out the mainsail. To avoid the shoals that run out from the southwest side of Virginia Cay, we fell off onto a port reach and rolled out the 110 percent jib. The boat liked the sail configuration and soon was sailing along at eight knots with a few surges to nine.

The main sheet runs from the mid-boom in what is called a German sheeting system; the double ended sheet runs forward to the front of the boom, then down to blocks on either side of the mast step, then aft through conduits to the cockpit winches. This allows you to trim the sail from both sides of the cockpit and to double up the jib and main sheets to the single winches by using line stoppers. The 51 we sailed had electric sheet winches so trimming was a cinch. 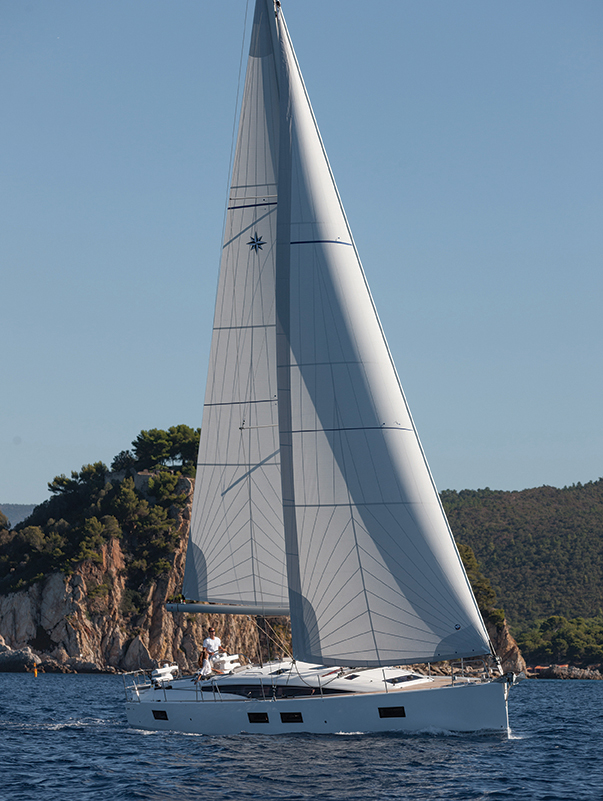 The headsail on the boat we sailed was the 100-percent genoa. It sheeted inside the side stays so we had the benefit of a small genoa that was easily tacked and trimmed and tight sheeting angles. The side stays run to chain plates that are all the way outboard, so walking fore and aft is on a wide, open side deck. A self-tacking jib with its own traveler forward of the mast is an option but the boat will sail better in a wider range of wind angles with the 10-percent headsail.

While we put the 51 through a series of jibes and tacks, we kept a weather eye on the approaching front and on the clock. Our time out on the bay was going to be limited. Still we got a great feel for how it sailed. Upwind the 51 is quick and handy. In the building breeze we saw eight knots hard on the wind without much sweat and were able to tack her well inside 90 degrees. The hull has chines in the after sections and we could feel the added buoyancy and power kick in when heeled to about 15 degrees. The boat really stood up nicely to the 18 knots of wind.

Off the wind on a reach, we saw a few 10s on the speedo and never felt the boat was overpowered or likely to spin out. Again, the chines help keep her feet under her even when the wind gusted over 20. The 51 has a large, deep rudder so the steering was positive and the helm quite light.

The boat is set up for a couple who can manage all sailing trim chores from the cockpit and, with the electric sheet winches, they can run the boat easily and efficiently. The 51 is a Philippe Briand design and the pedigree he brings to the hull shape and underwater foils can be seen in how well the boat sails. This may be an ideal size for couples who want to cruise in comfort but also want to sail a boat that does it all very well. 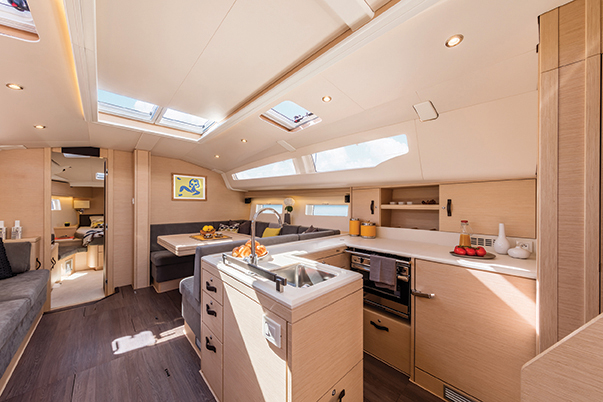 LIVING ABOARD
The 51 is the third design in the Jeanneau Yachts line as differentiated from the Sun Odyssey line. The effort in these new boats has been on leading edge hull design coupled with simple but effective rigs and elegant living accommodations that evoke true yacht styling. 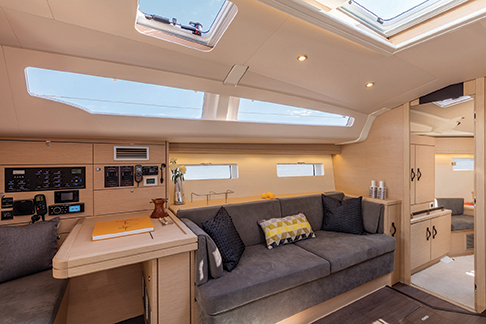 To get that certain “yacht style” in the new series, Jeanneau turned to designer Andrew Winch who has built a worldwide reputation and is a leading designer of super yacht interiors and finish. However, to get this style into a production boat that is built in series and to a price is the magic.

What Jeanneau and Winch have achieved is a bright, light interior that makes great use of natural light and ventilation, with neutral colors for fabrics and pale laminates for the bulkheads and furniture. The cabinet joinery is very nicely finished and drawers and doors fit with precision. The 51 has high grade fixtures and latches and the lighting is both subtle and well thoughtout for how a couple or family uses light for living, reading, cooking and so forth.

The boat comes in several interior layouts but the large master cabin forward and the saloon remain constant. The master cabin has a big centerline double berth with drawers underneath it. You can climb in and out of the berth from the sides, which makes it easier to make and means you can get out of bed without disturbing your partner. On both sides of the berth you will find small settees with storage behind and beneath them. There is a large hanging locker with shelves beside it. The en suite head is large and has good lockers. Plus it has a good shower with a clear acrylic enclosure.

The saloon has the U-shaped galley aft next to the companionway to starboard. This is as good a sea-going galley as you will find in a production boat and it offers plenty of places to brace a hip or hold on when cooking at sea. The optional day aft head sits right aft of the galley and the chart table is across from it to port. The chart table is a proper nav station with a desk and plenty of vertical surfaces for mounting MFDs, radios, phones and the rest of your electronics.

The dinette to starboard seats six around the square table. Across from it is a long bench settee that will be a good sea berth when on passage. Outboard of the settee is the cabinet for the TV that is stowed and deployed on a mechanical lift. 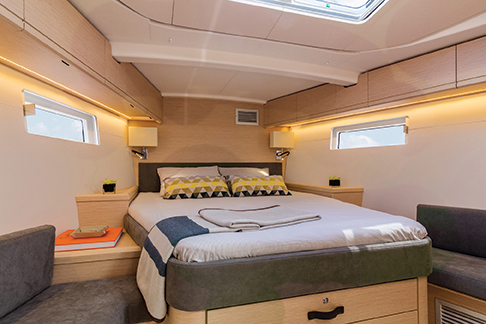 The two-cabin version of the 51 has a second large cabin aft to port and storage or a utility cabin aft to starboard. The three cabin version that will probably appeal best to most Americans has two equal quarter cabins aft. Or you can opt for a layout that has a single cabin and storage space in the aft starboard cabin.

The aft head has a large enclosed shower. While cruising this will be the day head unless you have opted for the smaller head to starboard. It will also be a great wet locker for hanging foul weather gear when sailing in rainy, wet weather. We hurried back to Miamarina as the wind began to gust and rain started to pelt on the to of the Bimini. Once snugged back into the marina berth, we all gathered below to listen to the rain and chat about boats. The six of us fit into the saloon comfortably and ambience was just right.

The interior of the new Jeanneau Yacht 51 is as pleasant a space as you will find in boats of this size. Having owned and lived aboard an older Jeanneau Sun Odyssey 45 for many years with a very similar configuraton in the cockpit and down below, I know how well this design and layout works. This new 51 is an ideal couple’s cruiser that will take them wherever their wanderlust leads them. 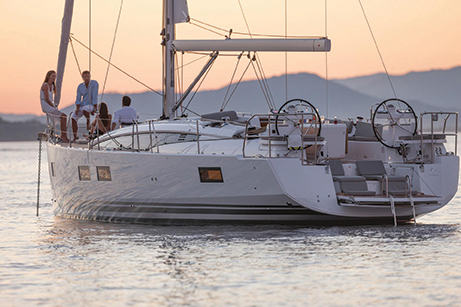