A gritty, yet fascinating stopover on the way north from Brazil  (published September 2014)

“Why not just go to the Bahamas like everyone else?”

There was a definite tone of annoyance in his voice, and I can’t blame him. He was just as confounded as I was after a futile search for a cruising guide to French Guiana. With the exception of very general charts of the South American coastline and a quick blurb about shipping traffic, there was literally no information about cruising in French Guiana, at least none that could be found at one of North America’s premier chart stores.

While no slouch when it comes to geography, I had to crack open the atlas when I got an email from Jason suggesting we drop by the Guiana Space Centre on our passage from Brazil to Trinidad. Wait, there’s a space station in French Guiana?

French Guiana hardly registers on the cruisers’ radar, and we had originally considered it as a possible stopover in case we needed fuel during our passage. But upon further investigation we decided to make this South American country a cruising destination, and not simply a necessary stop.

Jason and Gail Shell had invited me to sail with them from Brazil to Trinidad aboard their Antares 44i catamaran Two Fish. They had taken delivery of their new Antares in Argentina in the fall of 2013 and were slowly making their way up to their homeport of New York, NY. The Shells had spent the last three months sailing in Brazil and had become adept at cruising uncharted territories. Where chartplotters become blank, they would resort to satellite images and hand scrawled treasure maps in outdated guidebooks.

The plan was to meet up in Fortaleza, Brazil, and along with their friend Darren Garnier, we would sail the 1,060 miles north to Kourou, French Guiana. If you haven’t Googled it by now, French Guiana vies for its spot in the South American landscape, tucked between Brazil and Surinam. Our plan was to sail about 100 miles offshore to catch the North Brazilian and the Guiana current that would give us about a two knot advantage throughout the passage.

After the obligatory Brazilian cocktails of caipirinha, enjoyed over an indulgent meal of meat at a traditional churrascaria and a whirlwind tour of the street markets, we set sail for our destination. We had agreed to a two-hour watch schedule, but in reality—whether because of the threat of adverse sea conditions or just the excitement of being on a passage—our watches would overlap. Jason, already attuned to his new boat, would appear in the middle of the night, very much like a vision, to trim the genoa, offer some advise (though never about the stock market), and then vanish back into the darkness—never failing to startle the helmsman.

As we sailed closer to the equator and the Intertropical Convergence Zone (ITCZ), we encountered bursts of unsettled weather with heavy rain and winds gusting close to 40 knots; boosting our peek velocity to 14.8 knots and propping our SOG average to 8.6 knots. Needless to say, there was nothing dull about crossing the imaginary dashed line at the equator—the least of which was a close encounter with Davey Jones and his majesty King Neptune.

Nearly six days after leaving Fortaleza we arrived at the channel markers to the Kourou River. Advice gleaned from various cruisers’ blogs gave us some insight to our approach, cautioning us about the swift current. The channel markers into the brown river are flanked by shallow mud to starboard and the occasional protruding rock to port. A three-knot tidal current was beginning to ebb but continued to surge beneath us, jettisoning the bounty of the forest, including logs, branches and seed pods past our bow.

There is a Centre Nautique at the mouth of the harbour, and a marina at the edge of the river, tucked in the mangroves. The dramatic tidal flow meant that twice a day the boats were sucked into the mud, grounding them in the rich Amazonian goo. We chose an anchorage up river, past some boats that had clearly been there since the 70s—one with a “for sale” sign fading in the tropical sun, likely selling for the price of a one-way plane ticket back to France.

The tourist map of Kourou represented the city as an ideal vacation retreat—umbrellas perched on the beach like fancy cocktails and large boulevards lined with palm trees along Avenue de France. Surely this town, carved out on the edge of the jungle, could rival its Caribbean sisters Martinique, Guadeloupe and the other estranged family members of the French West Indies. 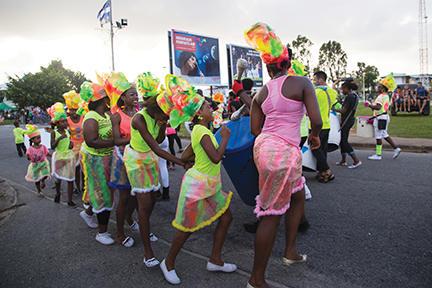 Kourou is a place of contradictions. The shiny Peugeot parked in front of a derelict, corrugated metal-clad home, or the brand new but abandoned housing project with shards of glass surrounding the gaping lintels like broken teeth. The biggest contradiction of all is the Guiana Space Centre, the raison d’être for Kourou, and to a great extent, French Guiana’s economic survival. It is from here that the French and European Space Agencies launch million dollar spacecraft to re-supply the International Space Centre, provide military surveillance, send commercial satellites into space and conduct research.

Not only does its close proximity to the equator make it an ideal location to launch spacecraft into orbit (the spinning earth affording extra velocity, allowing for larger payloads to the space station), but the sparsely populated region means there is less chance for people getting beaned with stray space debris during the launch.

When we arrived, most of Kourou was shuttered, recovering from a collective hangover of street parties and bleeding eardrums after Carnival celebrations. We strolled the streets littered with confetti, chased fleeting parties, ate Moroccan tagine served by Brazilian expats and watching an après carnival street party, complete with pregnant cross-dressers and colorful spandex being tested to the limits of its tensile strength.

France has had a presence here since the mid-1700s. Unreceptive locals, hostile European colonizers and indiscriminating tropical diseases largely drove out the earliest French settlers. And beyond the boundaries lined with shelves stocked with imported wine, jam and apples, the city is very much a jungle outpost bolstered by the mighty Euro in a desperately poor country. The diversity of ethnicities and cultures—including Hmong farmers from Laos, and a seemingly isolated group of expats from France—create a unique vitality amidst this gritty backdrop.

With a launch date for the Ariane 5 rocket not scheduled until the end of the month, we pulled up our anchor from the heavy hold of the churning mud to make one more stop at a rather lumpy anchorage. Les Iles du Salut, better known as the Devil’s Islands, is comprised of three islands that are about 15 kilometers away from Kourou. With a fierce current that rips thought the islands and sharks lurking in the turbulent waters, there is no question as to why these islands were once the site of a penal colony for French criminals and political dissidents, most notably Alfred Dreyfus who was falsely accused of treason in 1894 and sentenced to life in prison. And Henri Charrière who’s much disputed escape from Devil’s Island was chronicled in his novel and later in the movie Papillion.

As we approached the dock at Île Royale, we were surprised by the armada of tourist catamarans disgorging boatloads of people onto the islands. With arms full of baguettes and barrels of water, these tourists dispersed along the pathways leading into the lush interior. Île Royale, the biggest of the three islands, houses the majority of the buildings including a hospital, chapel, asylum and convict’s quarters. We hadn’t realized that these grim looking cells also housed the tourists who slung their hammocks over the grimy concrete floors. Hopefully the irony of their free choice of accommodation was not lost to them.

It would be another 650 miles to Tobago where we would enjoy the aqua-blue waters of the Caribbean, leaving behind the islands, the slightly morbid French tourists holed up in their makeshift dorms and the memory of countless prisoners left to languish in their cells.
French Guiana is a country that barely registered on my geographic compass, but it is one that continues to intrigue me. I sense that I will be back as a part of a bigger tour of the neighboring countries of Suriname and Guyana. Perhaps what made this area so interesting, though, was the fact that there was no paint-by-numbers cruising guide, allowing you to explore new frontiers without any expectations. But for now, acting on the advice of the chart and book proprietor, my next destination is Georgetown, Exumas—just like everybody else.

With each shift spent crewing with others, writer and photographer Salwa Farah has slowly but surely gained the skills and confidence to sail to new and unexpected adventures. Currently, Salwa is looking forward to discovering her new playground near the coastal waters off South Carolina where she has recently moved.

View all posts by Salwa Farah