On the 21st morning of our passage I wake long before the alarm goes off for my 0600 watch. The early morning air is warm so I dress lightly in a short sleeve top and yoga pants then step out into the cockpit to check our position. Steve and I share a quick good morning snuggle behind the binnacle, silently enjoying the dawn light before doing our usual change of watch rundown of heading, speed, weather and interesting observations.

Our last night at sea was calm and as the full moon disappears into a beautiful peach sunrise we watch the light creep slowly across the sky revealing the outline of Hiva Oa, our first destination in the Marquesas. Three weeks of staring at waves, clouds and the wind, if that’s possible, make the island appear large and menacing before us. It heaves steeply out of the ocean, alone and sharp against the horizon, its tallest peaks mired in puffball clouds that seemed snagged on the rock itself.

There is an excitement on board, a sense of pride that we’ve almost completed what, to me once seemed an impossible passage. For months I wondered how we could possibly sail 3000 nautical miles, non-stop and all alone, across the largest stretches of uninterrupted ocean on the planet, the Pacific Ocean. When we first bought Kate, our 41’ sloop, three years ago even considering our departure brought a litany of what ifs to mind.  What if we were caught in a storm, what if we had a catastrophic mechanical failure, what if we had to abandon ship, what if there was an accident and one of us was badly injured, what if it was Steve.  Would I have the skills to sail singlehanded? Would I have the fortitude to carry on? The list of questions and scenarios were so overwhelming that some days all I could do was dismiss them, saving them for a time when I felt confident and strong. By the time we left Ilsa Isabela in the Galapagos I knew that this trip would be like every other, not 3000 nuatical miles today but the next four hours that I am on watch and responsible to keep us on course and out of danger. A series of small events strung together by time, the grains of sand that cumulatively make a beach.

But, there is a slight disappointment in seeing land, in finishing our first extended passage. For 21 days and nights it has been just the two of us, our boat and the sea. Except for the 10 minutes each day that we listen to voices on the HF radio receiver reporting weather conditions ahead of us we’ve only heard the sounds of sailing, the murmur of the wind, the rush of the ocean, the rustle of the sails and each other. I have spent long days encapsulated in thought, suspended in a silent contemplation that only an endless horizon allows. I have begun to understand the nuances of the ocean, of our boat and perhaps myself. I feel like I am finally on the edge of mystery. And I am sad to be giving all that up.

Nearer to land I start to discern colors and details and especially smells. The olfactory clarity you get by being at sea is quite amazing. Of course there are scents out here, the exhaust from a passing, unseen ship, the pungent odor from a nearby school of fish, a perfume held captive on the breeze but mostly it is the clean saltiness of the ocean and even that becomes unnoticeable after just a few hours of sailing.  I can pick out the smell of moist earth, of green grass, of leaves and decay.  I smell the warmth of rocks in the sunshine, the sweet aroma of unknown ripened fruit, the bouquet of flowers in bloom and the muskiness of animals. I am pleased that I can’t smell the marks of humans yet, no reeking garbage rotting in the hot sun and no tell-tale stench of sewage. 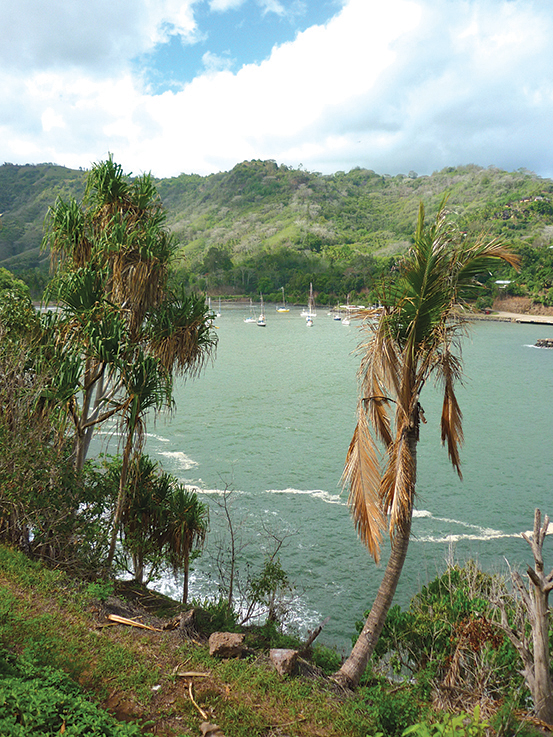 We’ve been making way slowly for the last twelve hours on only a small headsail but when the struggling wind finally dies we give in and, fifteen miles from land, turn on the engine. Except for making water it is the first time we used the engine since leaving the Galapagos and it feels a bit like cheating, but the agony of spending another full day adrift now that the island is in sight is just too much.  We motor slowly around the south side of the island and find Atuona Harbour, setting anchor amidst a calm sea of other boats, just below the hill that is Gauguin’s final mooring.

After all this movement it feels strange to be still, well relatively speaking, and stranger still to know there are people next door and that they can easily make out our facial expressions if not hear everything we say. We arrive on a weekend so we have a few grace days to settle in before heading to town to check in and assimilate back to solid ground and civilization again. We tidy the boat, putting away the sails and unpacking the everyday things that are so carefully stowed away down below, all the while smiling at the neighbors and keep our voices low. I am looking forward to doing some laundry, digging out the coffee pot in the morning and putting the toilet seat back on, its jury rigged hinges too delicate for the rigors of the sea.

Our engine driven water heater was removed in a large rusty heap in Panama City so my afternoon shower is neither hot nor particularly long. But I relish the luxury of getting clean without wedging myself against the counter and the mast to avoid falling over. That evening the bottle of champagne that I have chilling in the fridge to celebrate our success stays cold as we are much too exhausted to pretend to be fancy enough to drink it. Now that we’ve stopped we are both out of rhythm and find all the extra stimulation of landfall and people mentally draining. Instead we toast over a can of cold beer and a light dinner and head to bed early. After 21 days of running a 24 hour watch schedule (four hours on, four hours off) it is a novelty to lie down to a whole night’s worth of uninterrupted sleep ahead of me. And what’s more, for the first time since the Galapagos, 22 nights ago, Steve and I curl up in the v-berth, together. 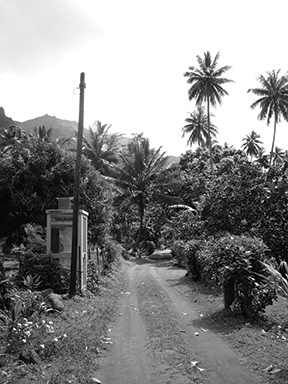 On our first trip ashore I wonder if after 10 paces in one direction will my feet automatically turn around and carry me back to where I started, such has been the case for the last three weeks.  But we don’t have time to test the theory since a truck stops, offering us a lift into town. The Gendarme only processes check-ins until 10 am and it is already past nine so we accept, climbing over the tailgate as we did so many times in South America.  The driver immediately motions for us to ride in the cab so we all squash in together, exhausting our mixed language conversation within a few cheery sentences.

Since we used an agent to avoid paying a bond we simply have to hand in our passports and sign a few documents, everything is waiting for us when we arrive. All that is left for us to do is take a copy of our customs declaration to the post office and mail it to Tahiti for 75 cents.

After our easiest check-in to date we roam the little town, check out the few stores and begin the endless calculations of price comparison and currency conversion. We have a surprising amount of veggies left; a few carrots, onion, potatoes, cabbage, and some sad tomatoes, but nothing is particularly fresh after three weeks at sea.  While at the bank we spot a truck parked across the street, the tailgate down and a crowd of people gathered. Like a pig foraging for truffles I have found the local veggie lady. I buy a small bunch of vine ripened tomatoes, a beautiful tiny cabbage, two dark purple eggplants, a bunch of long beans and a head of leafy lettuce. When I do the exchange I am a little taken aback, my small bag of veggies costs 15 dollars. A few more necessities and treats at the local store and we’ve already spent 50 bucks and only have two small bags to show for it. As we leave town I count another trapping of modernity I willingly left behind back in Panama: consumerism.

It takes 45 minutes to walk back to the boat along the road and up over the hill. It is a hot and muggy afternoon but we are glad to stretch our legs. I drink in the countryside; the smells of the fruit trees, the colors of all the flowers, the smiles and waves from the people. It is a direct route home on the only road on the island but I am still feeling a little lost. We safely navigated our way from Panama to find the small archipelago that boasts being farthest away from any major landmass in the world, and yet on solid ground I feel like we are adrift. 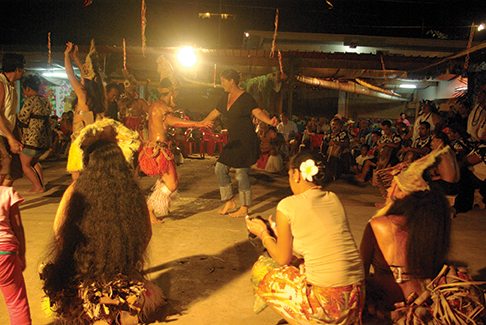 We don’t know if the five dollars we paid for a bottle of beer was a bargain or a rip off, if hitching a ride to town in the back of a pick-up truck is allowed or illegal, if we can eat the fish or drink the water without getting sick. The language is strange and the landscape imposing. Steve says we just haven’t found our groove yet. Eventually we’ll fit in, feel normal and look like we belong here but, for now we are just going to have find some place that is playing really loud music. At least then we’ll look like we’re dancing instead of just stumbling around on to dry land with our sea legs still attached.

Heather Francis is from Nova Scotia Canada, Steve is from Australia. In 2008 they bought their Newport 41’ sloop, Kate, in California. In 2010 they left Panama and starting sailing west across the Pacific. They are currently looking for wind in the Philippines. To follow their adventures log onto www.yachtkate.com.

View all posts by Heather Francis