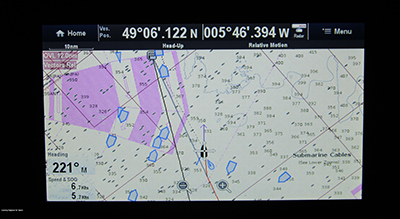 The first of July I was happily minding my own business when an email from John Neal of Mahina Expeditions came across my desk. “We are leaving in two weeks on Leg 4 of the 2017 Mahina Expedition from Falmouth England to Lisbon, Portugal. Come join us”. Shrugging my shoulders and wondering what I was getting myself into, there was something exciting about finally seeing Mahina Tiare in person. (Top image,  viewed from the National Maritime Museum Cornwall in Falmouth England.) 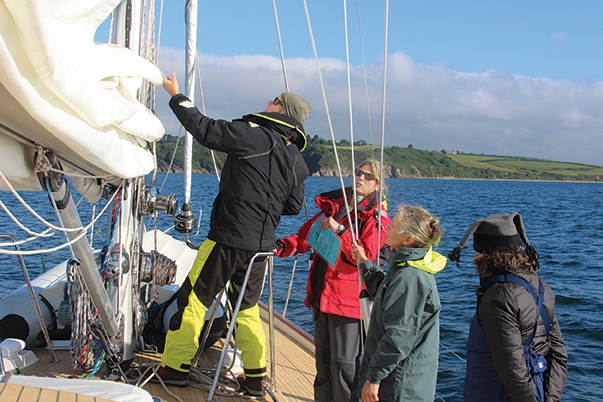 John Neal and Amanda Swan Neal of Mahina Expeditions have well over 600,000 offshore miles between them. They take up to six crew on passages from New Zealand to Norway in 2-3 week stints. You get a full-on experience of learning in real time aboard a Hallberg-Rassy 46. Chores are divided and rotated between the crew so you cover the entire gamut of passagemaking and coastal cruising. Beside the hands-on approach, there is time set aside each day for classroom work which can take place in the cockpit or down below depending on what is on schedule for the day. Navigation, knot tying, engine check, sail repair, provisioning are just a few of the classes. Above, Amanda steps back while the crew discusses the order in reefing the main. Note the blue card in Kelly’s hands. Yes, there is a cheat sheet. 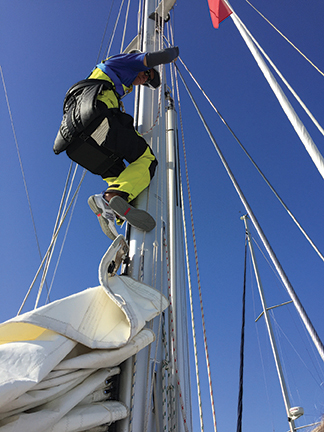 Amanda asks if we want to climb the rig. Need she ask? Everyone was at the mast before she could finish her sentence. Every moment is a teaching moment so MT has various methods such as a bosun’s chair or climbing harness; you can make an informed decision for your own boat. 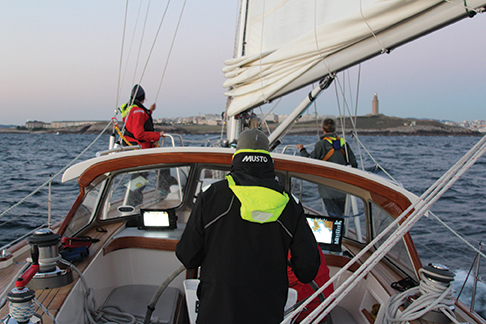 First landfall. Crossing the English Channel from Falmouth, England to a Coruna, Spain. That is a 2000 year old working lighthouse (Hercules) to the right of the picture. Which I’m happy to say, I got to climb though it was so windy they did close the very top of the lighthouse. I know John has repeaters down in the nav station and in his cabin but it was startling to me how casually he and Amanda handed off the working of the boat to Dave, Kelly and me. We started with an offshore passage so the first few nights were spent at sea. We had our watch times and lo and behold we were on watch and John and Amanda were below. They have a lot of confidence which makes you want to step up to their expectations. 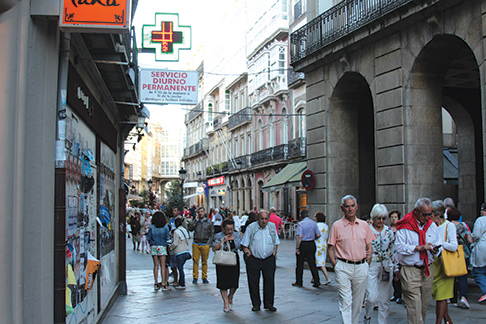 The voyage was split between offshore and coastal cruising as well as spending nights in various towns and villages along the coast of Spain and Portugal. a Coruna was one of the larger towns we went to. After settling the boat in for the night, the crew took off to explore the city. There were plenty of tourists and what made it interesting was that all the tourists were fairly local. We didn’t hear English spoken until we got near Lisbon. Everyone however was friendly and helpful even though we didn’t speak each other’s language. From a larger city we went to the remote village of Muros (below).

We arrived as a festival was taking place so entered the harbor to an accompanying band. It felt quite welcoming! 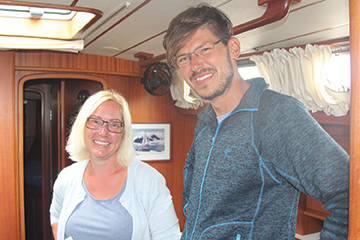 John and Amanda either know everyone out there cruising or they quickly make friends with those they don’t know. The couple above were just heading out on a circumnavigation when we docked next to them in Combarro, a charming village with an historic center which has been declared a Property of Cultural Interest. 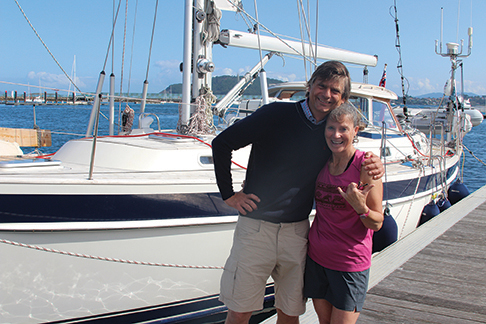 Amanda is standing on the dock with Leon Schultz who also has a Hallberg-Rassy 46. He offers customized expeditions which seem to be heavily invested in wine tasting. As our crew, Dave, exclaimed, he felt as if he was meeting a god, opposite. 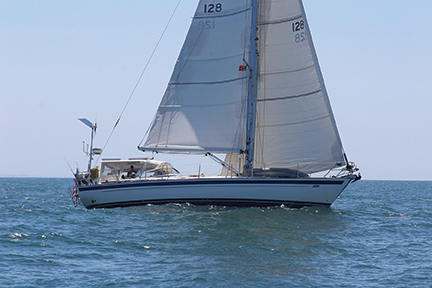 We came across Nigel Calder off the coast of Spain and spent time sailing in circles around each other taking photos. 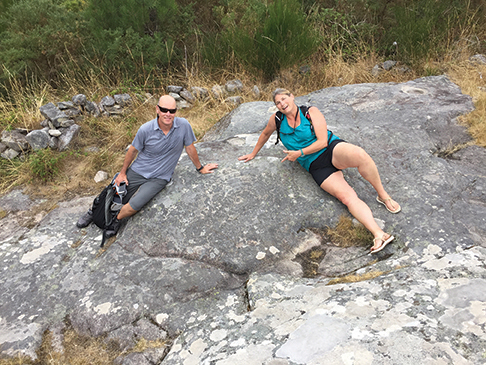 For Dave, Kelly and I this was probably our ‘bonding’ moment. Its the crew’s responsibility each night to decide where to sail to the following day, plotting the course, helping each other sail the boat. We found a brief mention of petroglyphs in the cruising guide’s write-up of Muros. An hour and a half of hiking through the village, being chased by an elderly woman through fields we didn’t know were private, along a road and then up into the hills we finally found what we were seeking. It may be a bit hard to see but well worth the hike and giggles that ensued. Perhaps one of those “you had to be there” moments. 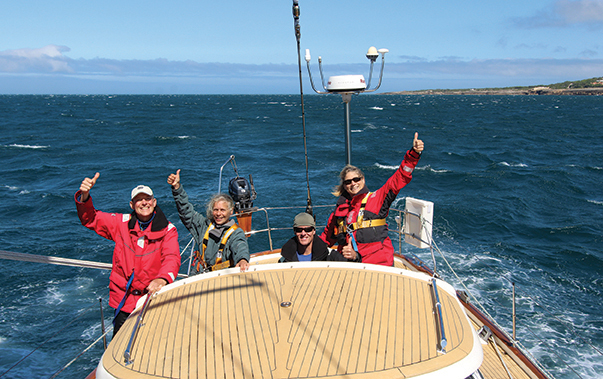 Winds seem to pick up at night and we spent an inordinate amount of time putting in and taking out reefs during the night, In Viana de Castelo we came upon a folk festival, above the tile houses of Porto, Portugal and the terraced hills of the Douro region of Portugal where Port wine comes from. Kelly is with our driver Luis Catalao and his daughter Cris who quickly became part of our ‘family’. John, Amanda, Dave, Kelly and I hired the Catalaos to help us explore the wine region for a day. Below, entering our final destination of Cascais, Portugal, winds topping out at 43 knots. A perfect way to end an incredible two weeks. 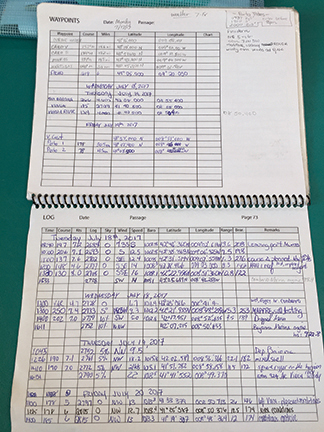