Recognizing my own shortcomings, I know that when it comes to tasks, if it’s not written down, it’s not getting done. Something similar may be said for those things that I really want to have onboard for longer passages  (published April 2018)

Winter may be getting ready to fade into memory for this year, but that may also mean that it’s time to relaunch your boat or begin to prepare for a serious passage. Preparation for those efforts can be a daunting task whether or not you’re not familiar with the process. Long ago I heard it said that The Sea will find any weaknesses. I’ve also heard it said that if I stay in sailing long enough and cover enough miles, everything that can go wrong, will go wrong. Good preparation is an effort to disprove that last statement.

Deciding on what you want to have onboard and what needs to be accomplished in order to get underway may truly be the beginning of your adventure. It’s time to think about preparing to make your boat ready for sea, and if your preparation or recommissioning is well thought out ahead of time, it need not be approached with apprehension. Well-orchestrated preparation is no less a thing of beauty than a properly equipped and managed vessel at sea. The preparation is, in fact, the rebirth of that potential. 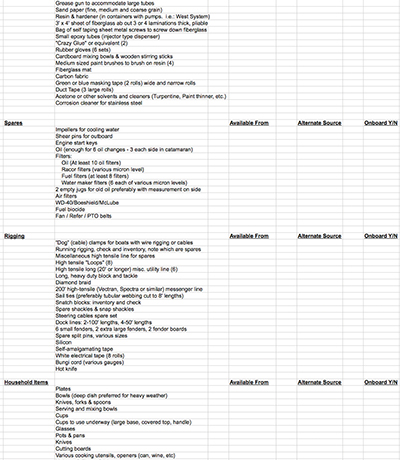 The conception of that rebirth begins with the creation of the equipment and jobs lists. The more complete and well organized those lists, the more complete, well-organized and efficient the preparation can be. As one prepares a boat, the first task is to formulate the “ideal” and most complete list of equipment and tasks that one would like to have onboard and accomplish on the vessel prior to her first use. Later, additional gear or tasks may occur to someone, but if the lists are kept on file in a computer, they can be easily modified, and the most complete versions can be saved for future reference. The lists should not only be a listing of tasks or tools, but it should also have space reserved for noting who is responsible for the completion of the task and a space for noting the date on which that task has been completed.
To make it easier to formulate the list as well as delegate various areas of responsibility, the general master work list can be broken down into specific areas. These areas should include: Navigation, Electrical, Mechanical, Structural, Rigging, Sails, Winches/Deck Hardware, Safety, Provisions, Miscellaneous and Tool and Spares Inventory. Naturally, different vessels will have different requirements. Powerboat owners wouldn’t have much use for a job list that included sail repairs, but they might feel the need to break down the Mechanical list into smaller categories that included Refrigeration, Main Engine, Generator, stabilizer, etc. Similarly, some racing boat owners might want to break down the Tool Inventory list into: “Tools Onboard During Races”, “Tools Onboard For Casual Cruising and General Maintenance”, and “Tools In the Container/Van”. The initial list should be as detailed as possible. By making detailed lists, it will be easier to determine whether something has been accomplished, and fewer tasks will be over-looked. By creating and keeping a “master work list” that includes most of the jobs you would ever want to do, next year’s tasks of decommissioning and recommissioning will be greatly simplified. As new jobs occur to you, add them to the master list. A great help might be to go through the list with the crew and get their aid in creating the original list. Determine who is responsible for the completion of a particular task or area of tasks and get their estimate of a completion date.

Usually, I prefer to have separate lists for jobs and equipment. If those lists are created on Excel spreadsheets, you will be able to sort the needed equipment by store, or person doing the purchasing. Similarly, tasks can be sorted by department, priority, or person who is responsible for the completion of the task. Once the equipment list is thoroughly created and distributed, one trip to a particular shop can get most if not all of the necessary gear from that shop, eliminating repeated stops back to the same place. When the jobs list has been created and sorted by individual, they can more efficiently manage their time to get everything done. As an example, if one crewmember is assigned a task to change the engine oil and do a minor fiberglass repair, while another crewmember is picking up the necessary oil and filters, the first crewmember can be initiating the first stage of the fiberglass repair. When the oil is on hand and the first layup of resin is hardening, the person doing the tasks can get on with the oil change. Everyone is busy, striving for the same goal and expediting each other’s efforts.

While having a very complete list of tasks, tools and repair kits is a good start, you will need to prioritize which items fit into one of several categories. Which things do you “Need To Do/Have”, “Would Like to Do/Have”, “Can Easily be Deferred”. You may want to add an extra 50′ of chain to the 200′ you already have, but if you’re cruising in shallow water this year, you may be able to defer that to a later date. Similarly, having all of the tools to complete all of the tasks that you’re likely to encounter can be convenient, but if you’re sailing short distances between well-serviced ports, you may be able to reduce your tool inventory and use your resources elsewhere.

Some jobs may be best left to the yard to perform. Someone on the crew may not be qualified to perform a major engine overhaul or replacement, as an example. The owner or skipper should go through the worklist, determine which jobs are to be done “in-house” by the crew, which are to be done by the yard, and which are to be performed by outside contractors. The cost for each job is estimated, and, following consideration by the owner, priorities are established and the list is confirmed. After deciding on the final worklist, the work can be appropriately delegated and begun in a suitable schedule.

If you’re having the yard do some of the work, it’s best to be clear on the billing procedures of the yard or contractors prior to commencing the work. What is the hourly rate they charge? Is state tax applied to the labor bill as well as to the material bill? How does that compare with other yards in other states? Would a different yard be more suitable? Is the labor rate the same for all of the workers? Are the costs equal for the mechanic as well as the rigger or the head of the department as well as the apprentice? Are you going to be charged to discuss the work as well as to have it performed? Is there a yard surcharge added to bills presented by outside contractors? Does the yard get paid a fee by outside contractors for recommendations they make? The consumer ultimately pays that fee! Is the yard willing to negotiate a lower hourly rate during their slow periods such as winter or late summer? Getting started early may save you both money and time rather than waiting for peak seasons when many people will be rushing to get work done. Getting started with lists is the beginning of the process, and now is the time. 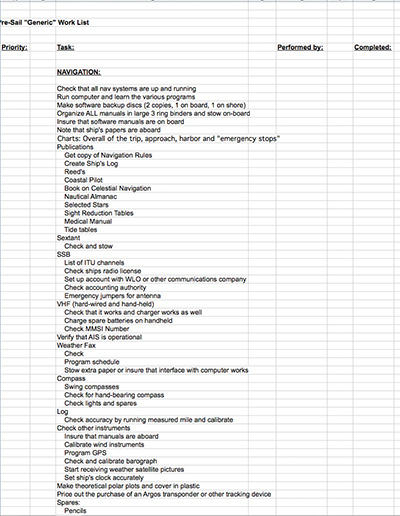 Any owner will only want to deal with a reputable yard, performing their tasks in a businesslike manner. And, as such, the yard is expected to make a reasonable profit on the work they undertake. But it’s up to the owner or his representative to make informed comparisons prior to making a commitment to commence the work, and the information should be put in writing by the yard prior to commitment as well. The relationship between the vessel’s owner and the yard need not and should not be confrontational; both have the same goal of improving the vessel throughout its preparation. But a clear understanding of duties and obligations put in writing by both sides will go a long way in avoiding misunderstandings that are in no one’s best interests. It should also be understood that changes in the list of jobs to be performed by the yard will most probably also imply a change to the charges. Be clear on both.

Well-organized and executed preparation is a “thing” of beauty: a choreography of people and tasks. At the end of it the boat is the winner, and the people involved can be justly proud. They’re now ready to enjoy this year’s sunsets. They’re safely prepared for this year’s inevitable storms on the boat they recently purchased. And it all starts with good lists.

Bill Biewenga is a navigator, delivery skipper and weather router. His websites is www.weather4sailors.com. He can be contacted at billbiewenga@cox.net.